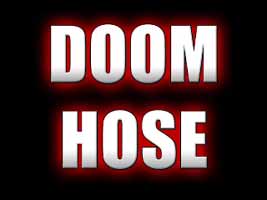 Overview: When strange things start happening to a new homeowner, he must confront the true face of evil in order to save his property and his life.

The Case For: Strong acting and creative camerawork are a stunning display of what can be done with a shoestring budget.

The Case Against: It's just not long enough!

We here in the Something Awful Movie Review department are committed to the proposition of watching every horrible movie we can get our hands on. Why? To protect the unsuspecting public like yourself from the pain and torment of sitting through them. Also we do a lot of drugs for such a small department. But every once in a great while, something comes along that is so singularly brilliant that we would be doing you a disservice if we didn't bring it to your attention. That certain something is "Doom House," the new horror masterpiece from the titans of terror, Rich "Lowtax" Kyanka and Kevin "Fragmaster" Bowen, and today is your lucky day. You can download the entire movie and watch it before, after, or even in the middle of reading this review. I wish we could share all of the reviewed movies with you like that, but let's face it, I don't think Lowtax is about to shell out the bucks it would take to cover the bandwidth costs anytime soon just so we can let you watch "Terror Toons." As I was saying, I've suffered through plenty of godawful low budget horror films, and I've always thought "Why? Why is all this potential going to waste?" Of course,I say that in reference to myself, as I realize that I'm wasting my college years writing for a website. But to an only slightly lesser extent, it is also in reference to the movies. Horror doesn't require a multimillion dollar budget to be scary. True fright comes from the things that are most real. That is why "Doom House" succeeds where so very many projects have failed. This film achieves a level of realism that is unheard of, while still using tried and true methods of cameraplay and misdirection to craft together a story that keeps you on the edge of your seat from the opening title to the haunting twist ending.

It should be mentioned that all of this is accomplished by only two people. Mr. Kyanka and Mr. Bowen share all of the duties of both cast and crew, working together as a well oiled machine. They are filmmaking's new power duo, unlike a certain pair of brothers who shall remain nameless, except to say that their last name starts with a "P" and is spelled the same as "Polonia." This means that only one of them can appear on camera at any given time, since the other must be controlling the shot. Notice as you watch the film how they still maintain a sense of logical and realistic interaction with one another at all times. Without any further ado, not counting the rest of this sentence, much of which is just rambling, like this right here, I give you... "Doom House." 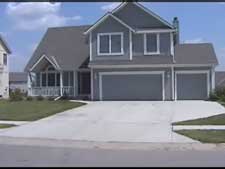 From the very first moments, "Doom House" plays with its viewers' minds and perceptions. The opening graphic initially reads "Doom Hose," which puts the audience at ease. Their minds immediately go to images of a murderous hose strangling people and spraying them with water, causing them to fall off of places. Those are basically the only tricks in a hose's arsenal. Right away, the audience is lulled into a false sense of security as they ready themselves for watching strangling after strangling. But just when the thought of a psychotic hose becomes comfortable, the title changes to reveal something far more sinister - "Doom House." Now all of the expectations that the audience has already forged are shattered and replaced by a far more terrifying thought. After all, more accidents happen in the home than anyplace else, so a Doom Home must be a pit of unyielding horror. The co-directors give the audience a few seconds of peace to contemplate what lies ahead as the opening credits roll, but the first image to appear afterwards is the looming form of the house itself. It's a good thing the shot is in daylight. If it was night, the fear would be so intense that the camera would most likely explode. Already the viewers are on the edge of their seats, and the movie has barely begun. 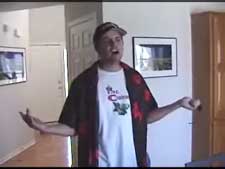 The best acting is all in the arms.

Meet Reginald P. Linux (Kyanka), homeowner and recent widower. Since the death of his bride, which is never given a full explanation so that it may better toy with the viewers' minds, a severe depression has weighed heavily on his soul. The only thing that allows him to smile through the pain is the dream of purchasing his beautiful new home. But even now, in his narration, Linux has the sense to know that a dream can quickly become a nightmare. He steps out onto his driveway, cautiously optimistic about his new home. He brings his few belongings inside - most of his possessions more than likely had too much emotional association with his late wife, so it can be assumed that he threw them away to escape from the pain, and what remains is so little that the directors choose to show his suitcase as being nothing at all, just empty space like the emptiness within him - and finds to his delight that the house has been furnished and decorated in advance. This tells us much about Mr. Linux. One has to imagine that the inclusion such fine accoutrements would be mentioned in any contract he signed when buying the house. This in turn means that Linux is a trusting man, willing to accept whatever is presented to him. Perhaps it is that trust that will be the end of him...

The shine of the untouched house is so bright that Linux is forced to put his sunglasses back on, but they don't stay on for long. He tears them off to get a better look at a strange doll on the kitchen counter, right by his keys. Right away, he can tell that there is something strange about the doll. Perhaps it is the way that it clashes with the rest of the decor. Perhaps it is the way that it is always changing, losing and regaining arms whenever Linux looks away. Perhaps it is the ominous choir music that seems to accompany it. Whatever the case may be, Linux is compelled to examine the doll thoroughly, and in a montage we see him holding the doll in varying states of dress and undress, signifying the length of time which he spends staring into its many detailed features. 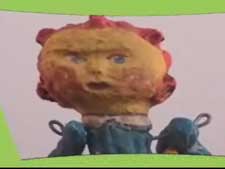 The face of evil.

We flash forward to find Linux unpacking his prized VHS collection. He stops as he notices the same mysterious doll on the mantle. We can safely assume that he did not leave it there himself. After putting on another shirt, Linux approaches the doll once again to announce his plans to dispose of it. He grabs the doll and heads for the back yard. He has a bit of trouble getting the back door to open, which is just one of the many touches Kyanka and Bowen include to heighten the sense of realism. Any new homeowner is bound to have trouble with those tricky back doors. It's that sort of attention to detail that elevates "Doom House" above its competition. Taking his vocal cues from mobster movie regular Joe Mantegna, Linux bids the doll farewell, then throws it as far as he can. When this is done, he dusts his hands together, and his self-satisfaction is so strong that the gentle clapping sound actually continues after he stops moving his hands.

We cut to Linux reading Barry Glassner's Fear, an aptly chosen book if ever there was one, for if fear has not found its way into Linux's heart yet, it will in a moment. His reading comes to an abrupt halt as the doll that he only just threw away somehow lands on the couch cushion beside him. Linux is transfixed by the swirling, distorted, surrounded-by-green-boxy visage of the doll, and he stares at it in disbelief for quite some time, as indicated by the removal and replacement of his hat. He resolves to destroy the doll by putting it in his garbage disposal, but by this point the tiny figurine has a degree of power over him. He paces the halls of his house for some time, taking his shirt off and putting it back on again in the process. Maddened by his desire to be rid of the insidious doll, Linux engages the disposal with a flourish and cackles as it grinds the doll into a pulp. Once again, he declares the doll's hold on him over by brushing his hands together.