"Cheevos," which are technically known as "Gamerscores" (you can decide which name is worse), are achievement points that Xbox awards you for doin' real good at the video games. Why are cheevos important? Breakdancer, MySpace user and Cheevos.com webmaster Bboy360, who's been racking up the cheevos playing badass Xbox games like Windows Solitaire, has the answer:

It's evidence you have put time into gaming. I only talk to people with Cheevos over 10k. I won't waste my time having a converstaion with a noob who doesn't know where the A button is asking, 'So do you play Halo?'.

Ah, yes. Like retweets and postcounts on message boards, cheevos serve an essential social-filtering function by helpfully quantifying your worth as human being. They also make it easy to shun the subhumans who didn't score as many points as you in Shooting Things With Guns XIII. Unfortunately, flaunting your cheevos outside of the Game Realm is considered a major faux pas, thanks to the anti-gamer prejudice that still taints our civilization. Bboy360 dares to dream of a better world, a world where everything runs on cheevos and big cheevo-havers like him are basically considered gods: 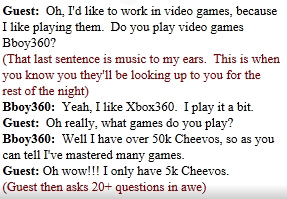 Surprisingly, this completely authentic-sounding conversation doesn't include the stage direction *points to my dilznick.* Maybe it's implied?

If you're a single gamer on the prowl for a Player 2, take note: Cheevos are also useful for weeding out scrubs from your potential dating pool. Of course, this could lead to some problems, according to relationship expert Bboy360:

I've heard many females that have over 100k complain that they have a limited dating pool because they don't want to date down. This could get very complicated. You might want to have a one night stand with someone of Bboy360's looks, but it's another thing to show up at E3 holding hands with someone that only has 20k Cheevos. I'd try to find something that will make up for the lack of cheevos like being a reality star or something.

PRO TIP: You should always take dating advice from nerds who call women "females," like they're anthropologists exploring a mythical alien species.

Once you've obtained a female by accumulating enough cheevos, you need to be on the lookout for a deadly threat - someone with an even bigger cheevo score than yours:

If you brought a date, odds are she's going to be impressed with the higher gamer score and ditch you. Get out as soon as you can and go to some other party.

If you're having trouble picturing this nightmare scenario, just imagine the classic comic-book ad where a jock is kicking sand in a nerd's face, except both guys are nerds and they're both kicking sand.