Wednesday, Jul 22, 2009 by Andrew "Garbage Day" Miller
Know of an awful site? Send it to us and become a hero! 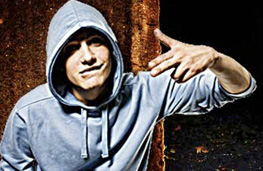 The aluminum baking pan "baskets" sold at Ghetto Baskets qualify as "ghetto," using the Urban Dictionary definition "jury-rigged, improvised, or homemade (usually with extremely cheap or sub-standard components)." Such a makeshift container hardly seems worth the $40 asking price, but wait, they're filled with a bunch of stupid shit! LOL!

As you can see, Ghetto Baskets packs its products with urban necessities such as hot sauce bottles, pregnancy tests and decapitated eagle heads. Also included are novelty only-in-the-ghetto items such as "batteries" and "soap."

Ghetto Baskets avoids picturing any black people, opting for inoffensive options such as a battered-woman punchline. Also, the site suggests white-trash "occasions for the Ghetto Basket" such as "the tornado didn't blow your trailer away." But even if Ghetto Baskets isn't racist, it's certainly guilty of being tragically unfunny. These hipster fucks deserve a gift basket of their own, provided that it contains at least one remote-detonated explosive charge.