It's been a Year! Keep Remembering, Dammit! 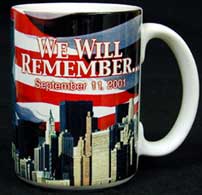 Indeed, it has been a year, and I hope that all of you good Americans out there in Americaland are still remembering and not forgetting. Lest you not remember, before you are put to death for being anti-patriotic and also an evil, terrible person who kills kittens and rapes retarded children with broken legs, it will soon be the year anniversary of the blowing up of some big buildings in New York and elsewhere, and also I guess the deaths of a bunch of people that I did not know. It is also the anniversary of the birth of a newfound blind patriotism and national pride that for some reason just didn't exist to the extent that it did prior to September 13th of last year, despite what we American students were taught to believe in grade school.

That's right, it's been an entire year since we Americans, the darlings of the world media, have been educated anew with information on how we can purchase products that advertise to the world that we are not about to forget September 12th and with information about what we should believe in terms of our country's righteous process of killing or assimilating all people who do not look or think like we do. GO TEAM!! USA!!! USA ROOLZ, ARABLAND DROOLZ!! I can't believe it's been a year already. How the time does fly. 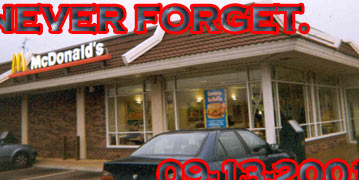 Please do not forget.

The media usually does an excellent job telling us Americans what to think, but they have rather missed the ball with this huge event. With all of the emotional and logistical craziness of the year anniversary of the attacks, it is confusing to know what I should be doing to properly pay respects to the dead and what products I should be purchasing to ensure that the people around me know where I stand. USA!! I'm not even sure what sorts of memorials I should plan for those around me so that they can properly heal from the trauma of September 10th, but I did come up with one and I hope that it is sufficient.

I've had a tough time going it alone in my memorial ceremony preparation, but so far I've come up with a few ideas for the big day that I hope will help heal the damage that September 11th has caused. I plan on asking as many people as possible to share in these memorial celebrations with me, but I am not really sure that else I can add to make the year anniversary of this tragedy any easier for all involved.

The way I figure, what better way to heal the damage of thousands killed and viable threats to national security than to have a Funtyme Jamboree!? I am planning on at least 75 people attending so this will be the best Jamboree ever! Much better, even, than that Jamboree I had for the 65th anniversary of the beginning of the Holocaust. The day will progress as follows:

3AM: Before I go to sleep, set the alarm for 6 AM so that I can be up at the exact moment that the first plane hit that one building or whatever and all of those people got killed. Death alarm!!

6AM: Hear the death alarm go off. Get up and shut it off, then go back to warm, cozy bed because I'm tired and I want to sleep more. Why the hell did I set the alarm, anyway? Stupid death alarm.

12PM: Wake up and go pee. While urinating I remember that today, one year ago, something happened. Look out of the window and see that guests have already begin to arrive and that they are setting up two enormous tents on the lawn. They have even brought their SUV's, which they have lined up in a ring around the two tents.

1PM: Delighted to see that there are already 30 or so children in the Happy Friends Ball Pit that I have built in one of the tents especially to be shaped like the daycare center in the WTC. I hope that more people will choose to enter Ye Olde Booke Store that I have made by digging a large pit under one of the tents and filling it with old newspaper.

2PM: The Corporate Glutton Buffet begins, complete with appetizers shaped like little people in suits and ties, salad made to look like dollar bills, and large glasses of red Kool-Aid which is oddly thicker than it probably should be. There are also three-legged races.

3PM: The neighbors begin to douse the nearby forest brush with gasoline and the lumberjacks begin to cut through the large tree trunks. Impending Doom Timer is set. At this time there will be bobbing for apples.

4PM: Everyone into the tents for re-written US history and patriotic lessons! Also, at this time there will be a large map of the Middle East set up and the children will have a contest to see who can defecate onto it from the farthest away. Winner gets a small bottle of sand from the deserts of Arabia and little block of Uranium to take home.

5:30PM: After singing "The Star-Spangled Banner" once for every third person killed during the attacks, the lumberjacks are given the signal and the huge, flaming trees fall onto the tents.

6PM: Time for the rubble-search! If you are alive, search through the rubble! If you find jewelry you can keep it! If it's still attached to someone, you will be given an extra $35 along with your precious discovery! Handling tax applies.

What a great way to celebrate the memories of those lost on September 11th! The September 11th Funtyme Jamboree would be sure to make people feel better about what happened one year ago and also to give them hope for the future. See, American media!! I can do this without you. But I have another idea as well: 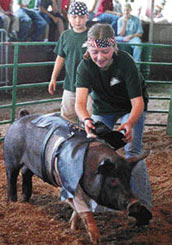 These kids will be at the Funtyme Jamboree for the pig-wrangling contest! Also, USA #1!!!

This is definitely one of the best ideas I have ever had and I know that it would make an excellent memorial activity for young and old alike. It would be a family affair, you might even say! This idea was really close in the ranks with my other idea for a Bin Laden Brain Bash or the September 11th Honorary Used Car Blowout, but the consequences of those activities just might not have done enough to help people heal or to give them closure, so I picked the Funtyme Jamboree. I hope things go well.

I truly wish that I could have had the help and guidance of the American media to help me with this difficult memorial plan, but instead, the media for some reason has been focusing on Iraq and whether or not the US should blow it to smithereens in the name of THE WAR ON TERRORISM because I recently heard about how Saddam Hussein has creepy weapons ALL OF A SUDDEN. Personally I think that it is all a clever ruse orchestrated by the American government to distract the public from not hating. Plus, Osama died ungloriously and undramatically in the mud and rocks of Afghanistan 2 months ago or so and we need a new hate target. USA!! #1!

(at a US Government meeting) 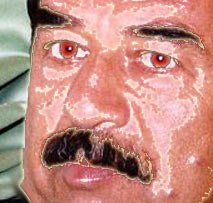 US GOVERNMENT 1: IT HAS BEEN A YEAR AND THERE HAS BEEN NO NEW TERROR! WHAT IF THE AMERICAN PUBLIC WERE TO FORGET THIS TERROR AND STOP HATING!!?? WE MUST ACT.

US GOVERNMENT 1: TO WAR!

On second thought, I truly do forgive the media for not keeping us Americans updated on year-anniversary preparations. Something like this obviously took far more precedent over a national tragedy. USA-ians, TO WAR!

I am sure that some of you brain-dead fartcaskets out there (please let there only be a scanty few) are going to be inundating me with dumb email complaining that I am not a "true American" or that I'm a "commie pinko faghole faggy fag" or that I'll be "on your hitlist of people to kill," whatever that means. I think that it means I should be a mindless drone and follow the masses and the media like the time I got lost in the hardware store and I just followed that mopping guy around all day because I didn't know where else to go. My motivation was that he said that he'd give me candy, though, so I'm not sure that the media actually plays a role here or why I brought that up now. But don't waste your time telling me that you didn't want to read an article with a point of view or an opinion or telling me that I'm not funny because I am aware of both of those facts and I will just tell you to shove it, anyway.

In any case, I hope that all of you across Americaland take time out this September 12th to always remember and not forget the events that took place a year ago on that very day. Fill your day with love and celebration in memory of the bad things that happened. It may seem a long time ago to you, but it's only been a year! If you need help coping, please stop on over to my house for the Funtyme Jamboree. Just look for those crazy tents. And if you're not too sad, please don't forget to invest in America and purchase a few figurines or lamps or cups or ashtrays or plates to help make sure that you always remember.

A Whole Lotta' Cranky Comin' At Ya!

Although our dear friend Cranky Steve and his Haunted Whorehouse have been woefully neglected recently, his site has been just an utter potpourri of excitement and horrible eye-scorching colored lighting. Every Saturday we'll post a roundup of the latest horrible, horrible, horrible maps to be reviewed by the ace test subjects at the Whorehouse, Jed, Mista T, and Psychosis. Now you might be wondering, "how the hell did Cranky Steve find three people gullible enough to review all these shitty maps?" Here's your answer: THE DATE RAPE DRUG.

After you're done reading the map review, be sure to submit any horrible, grotesque, disgusting maps to Cranky Steve's Haunted Whorehouse so we can get our crack team of blind monkeys to hammer on it until they kill themselves! I'm being serious: send us terrible maps! We love 'em, keep submitting them so we map review these bad boys and warn the public!