Wednesday, Jun 11, 2008 by Andrew "Garbage Day" Miller
Know of an awful site? Send it to us and become a hero! 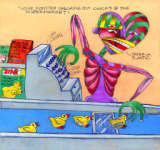 What comes to mind when you hear the word "melancholy"? If you imagine a rumpled man sitting on a desolate park bench with a clenched fist full of wilted flowers, you receive full credit. If you picture a Renaissance-era portrait of a floating space-woman who morphs into a star at the torso, you really need to accept the fact that the Smashing Pumpkins as you knew them are dead. And if you pictured a ghoulish Pet Sematary collie with a watermelon body, you're exactly the kind of pun-happy halfwit who might pay $350 for a print at lovemonsters.com.

Sigmund Freud called puns "the lowest form of humor," but even that cataloger of human depravity couldn't have predicted the blind-fish depths to which the Love Monsters' creators would descend. The phrase "Love Monster on its knees giving a big fluffy beaver a screw" makes blood leak from my ears, even before it's paired with the illustration of the Love Monster (a hideous creature apparently stitched together from skinned humanoids, then subjected to cubist mutation) interpreting this sentence in a moronically literal manner. Lovemonsters.com sells women's underwear with slogans like "Lickity Split" emblazoned next to a Love Monster's salivating tongue, which protrudes from his creepy disembodied head. It's an image that would perform chemical castration on any lover who encountered it during an attempted seduction. Presumably, though, the chuckle-headed personalities of anyone mentally bankrupt enough to purchase these panties would serve as a preemptive repellent.

The site features a few crude video clips, during which obnoxious music blurts (including yodeling, scat singing, brassy jazz, and kazoo vocals) accompany the imbecilic pun-driven action. "Love Monsters Caught Elephant Poaching" will inevitably be the worst 15 seconds of your day, even if you're a real, convicted ivory smuggler watching it through the bars of some squalid third-world prison. Oh, and the Love Monsters make golf jokes, which are never remotely funny when told by people, let alone freakishly reanimated anatomy-textbook diagrams.