Fox on Sex columnist Jenny Block has been sidelined due to friction-related hole injury. In her place we welcome guest columnist and Fox News contributor John Gibson with some topics of his own.

Fox on Sex: Night Creeping Outside Girly Houses and Other Summer Funs 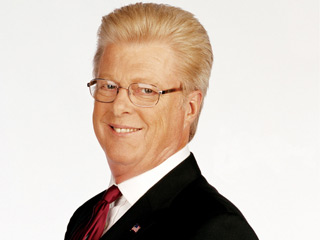 School's out for summer...Or is it?

As the weather warms up my mind always returns to one of my favorite youthful pastimes. I like to call it "night creeping" or "creepering," but I have heard it called "peeping" or "voyeurizing" on very specific message boards I read after my wife goes to sleep.

When it is nice outside there is nothing quite like donning my black-hooded creeping sweatshirt, sweat pants, and tabi boots and creeping around outside the house of my favorite neighborhood girlies. I prefer them aged 20-23, blond haired, and leftist, how about you?

If you are lucky your favorite girly has a ground-floor bedroom, open blinds or curtains, and a tendency to undress with the lights on. This sort of scene is straight out of Norman Rockwell. Boys throughout history have sneaked around in an effort to catch a glimpse of some forbidden flesh.

I say, meat's back on the menu, gents. Just because you are over 50 doesn't mean you can't indulge in a little creeping. If anything, you now have the means to properly outfit yourself for such clandestine activities. 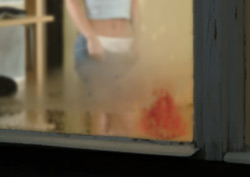 Night creeping at girly rooms is part of the cherished fabric of Americana.Unfortunately, the good old patriotic activity of creeping is under siege by the libs. New laws put in place recently make it a serious crime to be caught creeping around outside your favorite girly house. A real danger when you have Unamerican groups like neighborhood watches always snooping in your business. Arrest the real criminals, like the robbers and flag-burners, but if no one is being hurt then what is the big deal?

Recall the movie Revenge of the Nerds in which the titular nerds break into a sorority house and install a video camera to take video captures of sorority girls undressing, showering, and revealing their naked bodies and vagina hair. This intrusion of privacy was laughed off as pure fun - a frat boy prank! - and yet today video recording a nubile coed's vagina hair surreptitiously through vent or ceiling cameras, or by having friends in law enforcement reverse-activate their computer's web camera, has been made a criminal offense comparable to negligent homicide. You have to register as a sex offender, but where's the sex?

It's the criminalization of the female form. Feminized modern men are afraid to look at a couple of perfectly round breasts with brown areolae and little pencil eraser nub nipples that you want to bite as hard as you can. There is no harm in staring through a translucent blind, installing thermographs on the exterior of a young girly's house, or standing outside your favorite girly's window and abusing yourself until you make pleasure water onto the surface of a 3"x5" index card and then pressing that card, covered in your intimate fluid, onto the window of your girly so that it dries and adheres to the surface of the glass and she sees it when she has to get up early for her ACT tests that she didn't study for because she was being a very bad girl on the phone late into the night talking to her boyfriend. 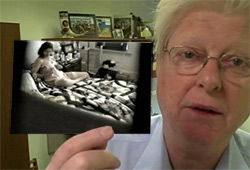 A picture my dad took while night creeping...of my mom. Not 5 minutes later he broke into her room and married her on the spot.By God, my father did all that times ten and he won Korea. I'm not going to get into my own personal trials and tribulations when it comes to creeping, except to say that unless we all stand together, as real men, we can never take back the night from neighborhood watches and feminazi body awareness vigils.

Creeping isn't the only summer fun I indulge in every year. When the thermometer goes way up I like to get adventurous and try new things. I know Jenny Block likes to take her little lady gadgets for test drives in her column, so I thought I would do the same.

As listeners of my radio show know I am something of a rooster ring aficionado. Ever since me and the wife discovered amyl and a whole new way of doing business we have been wearing out the old silicone loops and cinches. It got to the point where we'd get maybe one or two good sessions out of it before the darn thing would snap. I was in the market for something a little more durable when I discovered the Metal Gates of Hell. It's a leather rooster strap with three or five metal rings (I prefer five) that says, "No compromise." 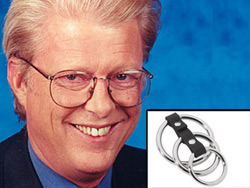 The three ring model was clearly inferior to the five ring.I ordered that bad boy and brought it home. You want to drop the rings on soft and then get it ready to go. Lube or saliva will do the trick for most. All it takes for me is a little imagination. After a few minutes of thinking about the Normandy landings I was prepared to drop the ramp. I called the wife up to the bedroom and I gave her a vigorous lap dance until she was ready to go. We were both very pleased with the outcome.

The thing about the gates of hell that really takes it to the next level is it combines four metal rooster rings with a fifth that captures your whole ball apparatus. It's really great for keeping you going and holding back your climax, but I have to admit to producing a small amount of blood in my fluid. Nothing to be alarmed with. Believe me, I've seen much worse and still considered it a good night, but if you're new to the rings you might be a little upset.

Whether you're using five rings, three rings, or none, the important thing is to spend this summer having fun with those you love and those who don't even know you're there, standing outside their windows at night.