By day, Kenneth Engelhardt is a dumpy, mild-mannered bookkeeper. But by night, he's the twisted creator of the world's second-worst ersatz Sonic the Hedgehog and Amy Rose webcomic!

Sonichen and Rosechen: The Lost Mutant Clones of Sonichu & Rosechu is an unofficial derivative/"parody" of the notoriously awful webcomic Sonichu (if that name is unfamiliar to you, consider yourself lucky). I know this because, like all good jokes, it came with a big paragraph that explains the concept behind it in laborious detail:

Sonichenandrosechen.com is both a humorous parody/derivative that is based on the well-known Sonichu internet comic originally produced by internet celebrity Christian Weston Chandler from Ruckersville, Virginia.. Sonichen and Rosechen: The Lost Mutant Clones of Sonichu & Rosechu is a gradually evolving independent science fiction/fantasy web-comic on its own standing. Like many other people surfing the internet, I happened to stumble upon Sonichu and the tragic story behind it's celebrity author. The website started off as an idea for a Sonichu derivative as well as a way to become familiar with web-design and graphics software and is still in the process of evolving into a parody website and a comic with a most unique storyline. Using a manga like style, there are loosly based multi-religious, political and fantasy themes being incorporated to make Sonichen & Rosechen: The Lost Mutant Clones of Sonichu a truly unique web-comic and website.

The site acts mostly as a respository for insane descriptions of each terrible-looking character (the "parody" excuse only goes so far), as well as each fictional location. (Next stop, Port Asperger!) 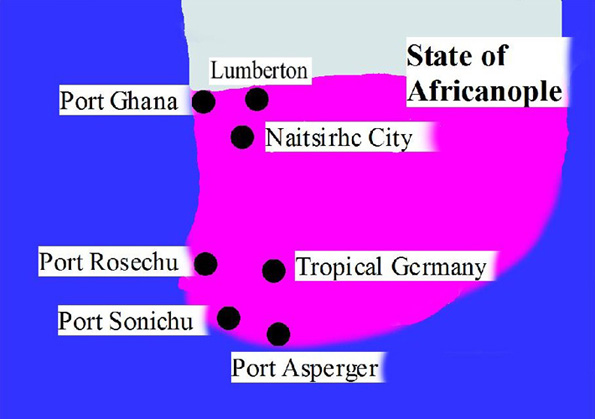 Here's the thing, though: I literally cannot figure out how to read this damn comic. There's a script for "Issue 3," which implies there were two previous issues, and yet I can't find a single link to them anywhere because the website is so incompetently designed. Kenneth's idea of navigation is having a big, cumbersome accordion chart of links with a lengthy summary of each page's contents:

Introduction Page 1: Broad overview of the website: hyperlinks to other websites, an introduction, characters in large graphic, timetable for projects, hyperlinks to relevant documentation, online bulletin board, captain's log of daily updates, networking/microblogs to follow or friend the clones, e-mail addresses

A lot of the "hyperlinks" are images of 3D blocks, as if he's unaware you can link words nowadays, even though that's always been the case. It's like he's never seen another website before and is trying his best to build something he's only heard of in books.

A lot of site space is devoted to charts - Kenneth is a wee bit obsessed with charts - that list all the projects he's currently working on and their current status. (He is under the delusion that people not only read his webcomic but also demand up-to-the-minute updates on his progress.) Bad news, hypothetical readers: According to the Moderate Term Project Sheet, Kenneth's plans to add a "Transgendered she-male ... gay friendly" character named Twinkle Boo-Boo have been cancelled. This is truly a loss for the ages.

Kenneth's biggest project right now involves transferring everything over from his old domain, KennethEngelhardt.com, which he's apparently decided to drop. He posts every step of this arduous process in his "Captain's Log Calendar," as well as broadcasting his incremental advances and breakthtroughs to Tumblr, Twitter, Google+, Facebook, and Plurk, for the legions of social-media sorts tagging along on this journey.

One of the pages that made the move is his serious, career-oriented page, on which he shows off his "competency in computer technology" with godawful Geocities-era web design. Nothing says "career-oriented" quite like hosting your resume on a subdomain of your goofy Sonic webcomic! To help clear up any confusion, he made a helpful chart for each page: