Got Game 2 (Thanks, sharculese!)

Hey all you Tumblin' teens and tweens out there! Now that your favorite webcomic Homestuck is on hiatus, you're probably looking for another multimedia extravaganza to fill the empty void that is now your life. Well have I got the game for you: Got Game 2!

In this interactive text adventure game from 1999, you play as "GIRL," who descends into a not-hamfisted-at-all depraved nightmare after meeting self-described "partier professional" Adam and picking all the bad options. Just one beer leads to one drug, which leads to one night of premarital sex. These horrors lead to pregnancy, of course, which leads to abortion, depression and a suicide attempt. Damn you, Satan! 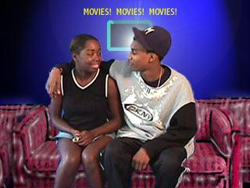 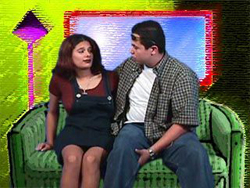 By contrast, choosing the good path will earn you a purity ring from COOL (Christ Over Our Lives). Moral of the story: It's "COOL" to be Christian! [does an insanely sick skateboard move while praying to my homie JC]

Along the way, your friend "FRIEND" is there to serve as your moral compass, armed with some dubious statistics about so-called "safe sex." So is your dog, who talks in a really bad British accent for some reason. 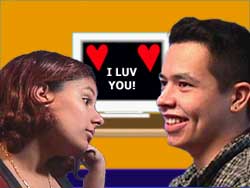 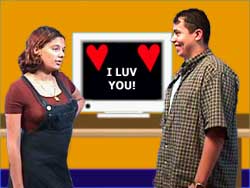 A day or two in their relationship, Adam shows "GIRL" his bedroom. And just when you think there's going to be a sex scene, he whips out the website he made about them:

BOY: It is a little area that is still under construction.

GIRL: What do you mean?

BOY: Well, I thought we might be able to work on that area together. It is an area of our relationship where we haven't quite reached that level of intimacy yet.

GIRL: What are you saying, Adam?

BOY: C'mon, help me out here... there is a lot to be done in the section called "under construction"... that I was planning on doing some original research right here and now.

Ah, the ol' "show 'em a webpage full of tacky 'under construction' GIFs" trick. That always gets 'em going! Adam has definitely "got game."