Kin Food is a food blog for otherkin ("a person with any nonhuman identity") that seeks to "find recipes for people craving food more suited to the nonhuman being they are 'kin' to, but still edible and palatable to the human body." It's "run by a wolfkin, a lionkin, and a foxkin," but if you're picturing chefs in animal costumes having a goofy, fun time experimenting in the kitchen, prepare for disappointment. Mostly they just take recipes from actual recipe sites and append them with some comment like "oh, this would be good if you're a vampirekin!" or "here's a snack to satisfy your bird self!" Supposedly, these recipes are determined from "research," which appears to consist of typing "what do horses eat" into Google.

These three fur-brained foodies tackle requests from a wide variety of otherkin. Take a look at their long list of kintypes to have your horizons broadened. Dogkin? Here's a recipe for dog biscuits intended for actual dogs. Dragonkin? Continue eating pizza. Merkin (excuse me, merfolk)? Seafood, obviously. Robotkin? Try an oil smoothie. Amoebakin? Uh... how about some gelatin? There's something for everyone here, except for this djinni guy they never got back to.

Kin Food also caters to "mediakin," otherkin who "identify" with fictional characters. Want to dine like an Eldrazi from Magic: The Gathering? Consider cooking up a possum ("Directions: First, catch a possum. This in itself is excellent entertainment on a moonlight night."). What about a Juggalo troll from the webcomic Homestuck? This is Tumblr, so of course they've got it covered. Na'vikin? Most otherkin food blogs would probably just suggest something blue, but Kin Food goes the extra mile by clicking on an Avatar wiki. Wreckitralphkin? Er, try the Minecraft tag. Kin Food is basically a dark, twisted version of Pinterest for moms trying to create a themed birthday party for their kids.

Sadly, Kin Food's inclusiveness has earned them the ire of some of the more conservative members of the otherkin community: 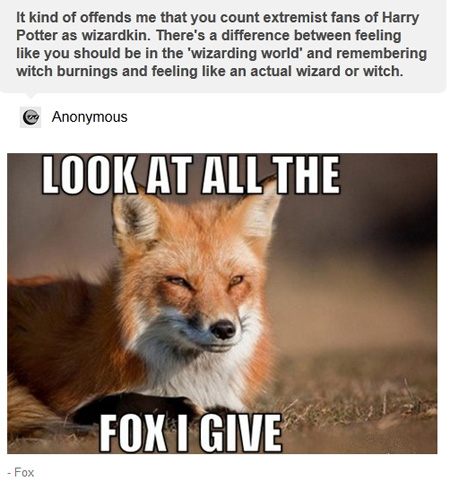 Also, the blog is a frequent target of trolls, which the Kin Food crew refuses to feed... except for those times when they fail to realize they're being trolled. Apparently they had to set up a disclaimer page because they'd gotten so many unsavory, potentially illegitimate requests for feces and human flesh.

If you are truly sincere about needing human flesh, though, because you're a demonkin or whatever, Kin Food can recommend some substitutes: 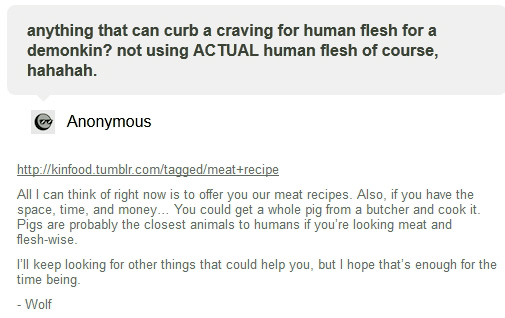