Fred and Sharon's Movies (Thanks, Oliver!)

Some elderly couples wile away the hours playing shuffleboard or patiently waiting to die. Not Fred and Sharon Spencer! Together, this power couple produces bizarre, terrible movies. Need a commercial, music video, or video greeting for your Web Site? Need someone to videotape your wedding or craft fair? Fred and Sharon will make a movie for you, of anything, for any possible reason, according to their weirdly desperate sales pitch written in Comic Sans and, more popularly, their "Who Needs A Movie?" viral hit video. Sadly, they haven't made a new movie since 2009. Maybe this is because of their exorbitant fees. To be fair, though, decorated Awful Link all-stars like these never come cheap!

Now, for those of you who are just now learning of Fred and Sharon's Movies, as well as for those short-attention-span fiends who are always clicking on the next big thing instead of watching briefly popular 2008 YouTubes on a loop, here's the thing: These are no ordinary movies. Browse through their impressive portfolio, and you'll find that most of them feature some really cruddy-looking computer animation courtesy of Fred, who, let's face it, is the real auteur in the family. This early video of the Shoparama Christmas Craft Fair could've turned out to be just another dull promotional clip if it hadn't been spiced up with the seamless addition of a CGI Play-doh woman. Marvel as vendors are awkwardly interviewed by "Doris" through the magic of cutting-edge special effects not seen since Roger Rabbit! 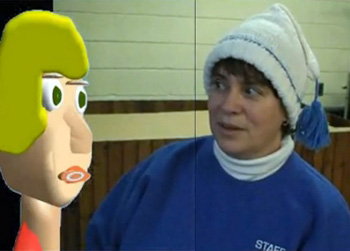 Since then, Fred's ambition has grown by leaps and bounds. Watch this avant-garde commercial that features a train driven by Fred himself, who turns to the camera and declares "We Deliver." It doesn't say who "We" are or what the product is; such ambiguities are what puts the "art" in an advertisement.

The animation section (sidenote: all the pages are titled "page2.html," "page3.html," etc. which is adorably sad) features all kinds of great animated shorts. The stand-out is arguably "Super Doris Rescues Harry from the Space Invaders", an elaborate tour de force of horrible voice acting (it's mostly Fred attempting to disguise his voice with basic audio effects), bad music (at least it drowns out the dialogue at one point), awful animation (there's a really disappointing transformation sequence of Doris becoming Super Doris), and questionable character design (President "Bazooki Obami"'s jaw is a different color than the rest of his head, giving him an unfortunate Sambo-like look).

The previous Super Doris "episode" is recapped in an obnoxious amount of detail, even though it has no bearing on the new story, which itself is recapped at the end by a live-action newscaster (Fred again). Evidentally the target audience is other old people who need to be constantly reminded of the things they just watched. 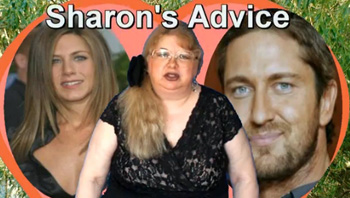 It's not all about Fred, though! Sharon has a side gig: She offers unsolicited relationship tips to celebrity couples! Who knows, maybe if Miley Cyrus and Nick Jonas had heeded Sharon's incredibly generic advice, they might still be together today!

Despite the enduring awfulness of all these videos, there is an oddly endearing quality to them. (Also charming are Fred's YouTube Uploader Comments, currently the only proof of his continued existence.) Come on, don't you wish your grandparents made goofy videos like this?