Garbage Day sent me this link and posed a question: "Are lolcats even eligible anymore?" My immediate answer to the question was "Ughh ...," but because looking at the dumbest shit people find is actually my job, I clicked the link. I've now tempered my position to "Ughh ..., except this." 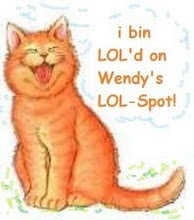 I don't know if any of you are really into lolcats (a word my spell-check thankfully does not recognize), but I'm going to assume at least one of you assholes has a few of them thumbtacked to your bedroom wall for the sake of argument, and also because, fuck you, I can do that. Anyway, I imagine your parents have occasionally walked into your room to make sure you're still alive, looked at the wall, muttered "I don't get it," and shuffled back downstairs to do a shot to numb the pain. As far as I can tell, what happened here was someone's grandma saw one of these lolcats and, in a weird attempt to try to be Internet-cool, decided she was going to get in on it. What has resulted is a collection of bad puns, half-puns, compound-puns, gross butt-stuff puns, and seriously just look at this one: 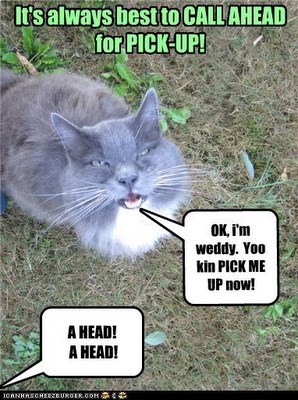 I should also point out that, despite the pretty obvious format for stupid Internet meme shit, Wendy seems to have missed the point that brevity is the soul of tired catchphrases masquerading as wit. Not only does she force at least two caption jokes into each picture, but also she includes another textual caption beneath them. Most of the time, these are just sort of restating the joke, though sometimes they clarify it or, in one special case, send out their apologies to the dead Elizabeth Taylor.

So to answer Garbage Day's question - yes, lolcats are still eligible if they are as profoundly confusing and stupid as this. Note: That doesn't mean send us more.