Back in the dark ages (April 2007), the SA forum goons bravely shared their stories of the dumbest statements they have heard during their time in class. Sometimes it was a particularly idiotic student. On a few occasions, it was the teacher or professor making the boob. I promised that I would bring you all more of these ridiculous comments, and like a Pizza Hut, I'm going to deliver, even if it is a little late. So take out your textbooks, turn to the first page and spit out your gum. It's time to make room on your timetable for Laughing At Stupid People 101! 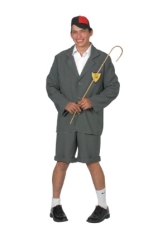 "Why isn't America a part of the European Union?"

During a geography class, when we discussed the forming of the oceans,
a girl in my class asked "When the oceans formed, where did the ground
go?"

"So can any of you think of an example of onomatopoeia?"

In College Writing 101, a girl in the back of the class said about the situation in Iraq:

"Why should we listen to what the Iraq people have to say? They are the ones who blew up the World Trade Center!"

It took a huge effort not to snicker.

This was our psychology teacher.

"I think that they need to stop stem-cell research. People with diseases will just have to die, the worlds getting overcrowded anyway".

This was overheard the day I was absent, which is good because I really think I would have physically attacked her because I know several people with MS.

"Everyone that came in from Katrina were a bunch of jerks.

"That's not true. Everybody was very grateful and nice at the shelter I worked in.

"NUH-UH My boyfriend was in the National Guard and he said everyone at the Astrodome was a jerk. We should just kick out everyone from Louisiana right now!"

If her boyfriend was anything like her, I don't blame anybody. Besides, the ones that were in the Astrodome came from the Superdome, so I'd be pissed too.

"Oh, I know color of skin doesn't matter! I know this guy in my other class and he's really nice and he's Muslim, but he's also Christian too!"