If reality television is the bottom of the entertainment barrel, pro wrestling is the 1 cubic foot piece of fossilized dinosaur turd located roughly 50 miles below the ground that the barrel is sitting on. It is an entirely indefensible industry chest deep in a mire of homophobia, drug abuse, people dying way too young and just plain bad television. Anyone who watches wrestling is either 5 years old, a terrible person or both.

That said, I used to watch wrestling as a kid. In my fat, gay childhood's defense, this was back when it was retarded and goofy and the characters were either evil plumbers or evil dentists or evil clowns. It was silly and cheesy and even as a little kid, I realized it was fake. I was also too young to know better. Then wrestling and I both grew up. I developed both pubes and an interest in girls, and it got all "real" and "in my face" and "exxxxtreme" and featured characters who would pour beer all over their face without ever managing to get any in their mouths. Then I quit watching because I saw enough of that at home. FUCK YOU MIKE YOU AREN'T EVEN MY REAL DAD. 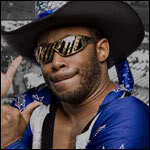 A black version of that dude who used to sell Slim Jims. Seriously. That's it.I regret to report that I'm back on the wagon, though now as "a terrible person" rather than "a five year old". A while back, my friend convinced me to give TNA a try. I was told it was wacky and silly like the wrestling I used to watch. I watched one episode and was hooked for all the wrong reasons. Sure, it was wacky and silly and dumb but the problem was, it wasn't in on the joke. At all. It was trying to pass itself off as serious entertainment for the 17-35 year old male demographic (who have since moved on to MMA for their "men in tights hitting each other" fix since MMA has the distinct advantage of "being real") despite being absolutely fucking awful. What follows is a "behind the scenes" explanation of this video. I will try to refrain from jokes because it will take away from how absolutely insane this all is. You know you're producing quality television when simply trying to explain what is going on to an outsider makes it sound like you're trying to take the piss out of the product. (Oh, and since this segment is going to run a bit long to fit all the insanity in, enjoy the pictures of members of the TNA roster with brief explanations of the character they're portraying. See if you can spot the stupidity!) 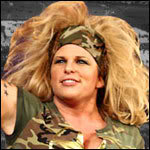 Genital herpes and a drinking problem.Okay, so the big dude in the mask is Abyss. He used to be a huge, evil, crazy guy who was thrown in prison for murdering his own parents or some dumb shit like that. Of course, as is common in cases of aggravated double parricide, he is allowed out of prison or Arkham Asylum or whatever to pretend to beat up grown men in tights. No homo. Then he became a lovable, cowardly retard - literally the Cowardly Lion from The Wizard of Oz - after receiving "therapy" from a dude (Steve Richards) who's claim to fame was that he used to dress in Daisy Dukes and pretend to be other wrestlers. He gave up on that gimmick presumably because over 3/4 of the TNA roster is dedicated to people pretending to be other wrestlers. We are now supposed to believe that he is a licensed mental health professional who's therapy techniques include hitting his patient with chairs.

Hulk Hogan (who is 60, going on 90 and still wrestling) decides to give Abyss his magical WWE Hall of Fame ring because he was tired of him always being cowardly, because Hogan has a borderline gay fascination with huge, slow, lumbering idiots (not least of which, himself) and because it was a way to wedge fifteen backstage Hulkster segments into a 2 hour show instead of just fourteen. This being TNA, of course, the ring isn't simply a good luck charm to give him confidence ala Dumbo's feather, but rather ACTUALLY HAS MAGIC POWER. THE POWER OF HULKAMANIA, BROTHER.

Naturally, this makes AJ Styles - a very conservative Christian in real life who due to totally impeccable TNA Logic(tm) is therefor stuck pretending to be Ric Flair circa 1987 when Ric Flair was banging 12 hookers a night and snorting cocaine off of a gold-plated toilet seat - covet the ring because WHO WOULDN'T WANT A FUCKING MAGIC RING. Also worth noting, since AJ Styles has literally no experience "saying swear words" let alone "being Ric Flair", TNA hired Ric Flair (who is 60, going on immortal lich king created by dark magiks) for eleventy jillion dollars to play the part of AJ'spersonalitymanager. Ric Flair's job as AJ'spersonalitymanager is to get the crowd to hate him. He does this by calling a supposedly mentally handicapped dude a "retard" on live TV and then asking a black guy if he can read and if his mom is on food stamps or something. Also, he bleeds at least 80 times per show and appears to constantly be on the verge of having a massive stroke. 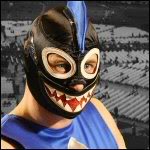 A guy in a wacky shark-themed suit that pretends to be "Stone Cold" Steve Austin. Why does this gimmick exist? For the halibut! Ha! Ha! Ha!They are supposed to be evil, villainous bad guys who cheat and stop at nothing to win and whom the crowd is supposed to hate. Of course, this being TNA, the crowd cheers them constantly (or at least they do whenever Ric Flair isn't busting himself open and flinging his old man blood on them).

So, AJ wants the ring and challenges Abyss to a match for it. Or rather, Ric Flair does on AJ's behalf between shouting WOOOOOOO and making himself bleed by tapping himself in the face. You know how wrestlers make themselves bleed by using a razor blade to make it look like an opponent has REALLY fucked them up? Ric Flair has done this to himself so many times over his 80+ years in the squared circle that his forehead is now composed of tissue paper rather than actual skin and a stiff breeze can cause him to look as though he's had a rather unfortunate accident with a cherry pie. A rather DELICIOUS, unfortunate accident. Abyss, of course, agrees outright rather than doing what any rational person would do in a similar situation, such as: 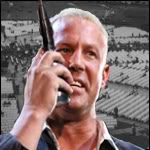 Glenn Beck.Abyss and AJ have a match full of plenty of hot man-on-man pretend fighting, the "climax" (this is a gay joke) of which sees Abyss literally slam AJ through the ring with the power of his Lil' Orphan Annie secret decoder ring. This prompts Ric Flair (who is in a wheel chair for reasons yet unexplained nearly a month later) to come to the ring and get sloppily manhandled by Abyss. This in turn prompts a British dude with an accent that sounds like a downtrodden cockney character from a Dickens novel about the plight of the working poor to enter the ring and do a sequence wherein he's punched "back and forth" between two wrestlers, in this case Hogan and Abyss. One hits him, he staggers backwards, the other hits him, repeat.

We then close the show with a comedy segment where all the 'bad guys" fall into the hole. Then some of the good guys fall in the hole. Weeks of build up for a slapstick routine from a 3 Stooges short.