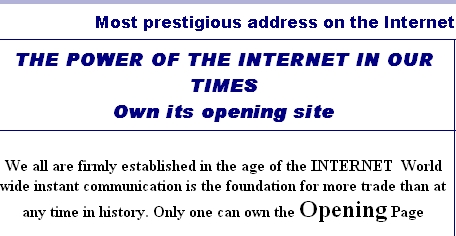 Before arriving at this Web address, did you first pass through the unavoidable portal known as the Internet's Opening Page? James Midkiff, the keymaster of this invaluable gateway, believes you did. "Openingpage.com is acknowledged to be the most powerful address in the World from an advertising standpoint," he argues. "Open the Internet -- obviously there is only one." "The Net's powerful launching point," where more than a billion browsers ostensibly start their days, could clearly command "zillionz." The domain's worth has been "estimated" by an unknown source as $300 million, but oddly Midkiff hasn't found any takers at the bargain-basement price of $1 million, even after sweetening the deal with this promise: "A bonus you will get is me, my energy, my ideas."

It's unclear why this jovial visionary, who often punctuates sentences with the parenthetical phrases "(smile)" and "(giant smile)," hasn't been able to move this hot property, despite employing the following time-honored tactics:

Perhaps you're not prepared to accept the agenda of this self-described "ideasmith," but by visiting Opening Page, you've already enhanced the site's already astronomical value! We are indeed living in amazing times.