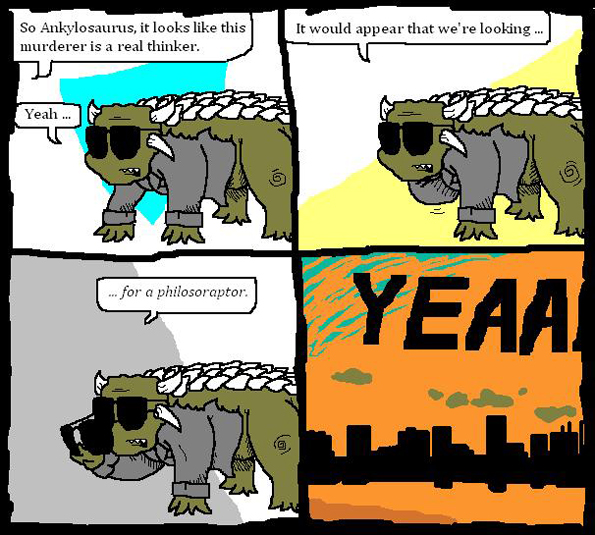 Philosoraptor, that got me thinking. Thinking of a world in which a wise old saber tooth tiger is watching an era come to an end. Pangaea has split and oh boy, the meteor showers are coming.

"The end of a T-rexistentialist world"

Jean Paul Sáber
I have not felt well since our world came undone by its seams. I believe that we have entered an era of utter apartness, the prospect of which, quite frankly, makes my skin crawl, my sabers ache.
Our old world is gone, the ur-continent torn, divided into small malignant fragments or cells, afloat.
We now find ourselves divided by fathoms the depths of which we cannot fathom.
I believe our world suffers from a Pangaeatic cancer.

Tea Raykes and Diametric Don
'Don't struggle, kid. Or struggle. It is entirely up to you.'
'Christ.'
'Just give in.'
'Sucker's in pretty deep already.'
'Just relax, kid.'
'Like, what I'm seeing is more a half-a-saurus.'
'Just rel...'
'Get it? Half a s...'
'...now is not the time, Ray.'
'Zing!'
'You're going to a better place, kid.'
'A wetter place is more like it.'
'Ray...'
'What?'
'Stop.'
'Just having a bit of fun, is all.'
'Just stop it. Stop. Hey, hey kid, I know you're scared right now, kid, but think of what a break you'll be to some lucky paleontologist some day.'
' Look at him go.'
'Hey, hey kid. Hey. I'm talking grade-A conservation.'
'Hell hath no fury like twelve tons of peanut-brained flesh drowning in mud.'
'Hey, listen to me kid: Obliteration. Exhumation. Restoration. Vindication.'
'Look at him go.'
'Hey, kid, listen.'
'It's like I've gone my entire life without ever really understanding the verb thrash before.'
'Listen, we don't have much time.'

Brontosaurus the Elder
Seen from a distance, the curvature of my neck and spine resembles the horizon of an old world at rest.
Tail to back to head it swings, like hills, like a sine wave sure of its purpose.
I am a living, breathing hillside. When I move, I am thunder incarnate.
This feeling is in my body. I am the landscape. My legs are trees.
My head - high and fragile, basically useless, dangling like a glass lantern under the parabola of my own neck, so far removed from everything of significance - knows nothing of my place in the world.
So up here, in my head, I am lonely. My body was a part of the world before it shattered and floated apart and it will remain a part of the new world, too; the soft curves of me now in stark contrast to the ragged edges and horrible scars of the continents. Solidly planted in the soil; mobile on a grotesquely grand scale.
But in my head, up here, high above the nature of things, I am removed.
In the lantern, under the sky, there are only my faculties burning like an incredibly small, impotent flame and the deep hurting want, for the son I watched drift away, headed for God knows where.

Jean Paul Sáber
No opposable thumbs among us; nothing to grab hold and hang on. We drift. This is the end of us.
I have seen flocks of what I believe to be feathered devils stampeding cross continent, shrieking.
The fools only now begin to realize that the world is what we make of it, and that nothing is constant.
I killed a rodent yesterday. By waiting and deliberating. It is an art.
Blessed be he who makes an art of his trade.
I sat at its hole for twenty nine hours, feeling less like an organic being than a sort of root. As he popped his head up from his lair, I swiped him out of the ground.
I believe that the rodents shall inherit the earth.
I swiped him from the earth, as the earth did swipe us all from our holes of delusion when it tore.
We have no meaning.
That what we have made of the world is a mess.
I loathe them, the dinosaurs; their blind faith that sheer size would somehow redeem them.
I loathe them, the rodents; their cowardly holes, their apparent promise of evolution.
I am a cat.
And should my sabers be cut, I would remain a cat.
I believe that I shall always hunt the way I do - let rodents and dinosaurs and everything in between slip and fall into the cracks between new born continents and disappear- I shall remain.
My species is permanent.
I believe that lying in wait for your prey is an art.
And I believe that art is the only way out of this non-existence which now threatens us all.

Brontosaurus the Younger
Sinking is a curious sensation. I cannot move my legs. The mud is cool and feels like the insides of something big and alive. The two grown-ups will not help me. Dying is not good. The sky is full of birds. Call for help.

Brontosaurus the Elder
The sky cries fire now. I lift my head, hoisting my hurt and want high into the heavens in the hopes that they be hit first. I have witnessed my only child drift away on a tectonic plate compared to which I am but a speck. He is helpless. There are smaller animals under me, believing my legs and body will shelter them from a fire that will grant shelter to none of us. The meteors, it had to be the meteors - sent here on soft, interplanetary trajectories, swung gently around stars and other worlds, describing much the same arch through space as does my own spine. I could not help my child. I hope he is safe. Everything up here is bright orange and moving at speeds I have never before imagined. Thunder is around me now. There is fire. My son, I hope you are in a cool and forgiving place.