How I Live Now

We've just got the one film on the roster this week, but it's one that Joseph "Jay Dub" Wade reckons is well worth checking out. Join him on his post-apocalyptic adventures as he spins yarns about How I Live Now.

How I Live Now

EXPECTATIONS:There's a wonderful economy of word choice in the title How I Live Now. Even before you discover later in this review what sort of post-apocalyptic world the film takes place in, you know something unpleasant is right around the corner. In a media landscape that sees asinine titles like Megapocalypse Reckoning from Beyond Tomorrow on the regular, a title like How I Live Now seems oddly refreshing. I hope the film itself is just as effective.

REALITY: The fact that this film received a limited release in the United States is proof positive that the only reason anyone watches The Walking Dead is for the sweet zombie kills. The collapse of society and the struggle to rebuild broken lives apparently isn't worth considering if our heroes can't stab a shambling ghoul in the brain with an ice pick. It's especially a shame that How I Live Now seems doomed to obscurity, because this film succeeds where so much of The Walking Dead fails. 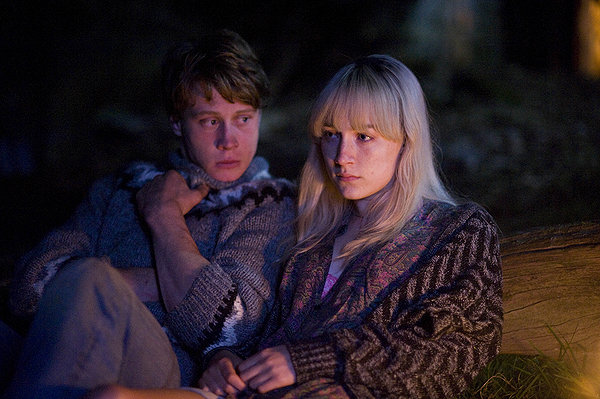 Why do you look so sad? It's a beautiful eveni- Oh yeah, the apocalypse thing.


The film takes place in the near future, in which Britain is under martial law and the whole of Europe teeters on the edge of World War III. Enter American transplant Daisy (Saoirse Ronan), an obsessive-compulsive ball of angst whose father has sent her to live with her aunt (Anna Chancellor) and step-cousins in the English countryside. When the aunt is called away to a crisis summit in Geneva, the kids have the run of the house, led by eldest son Edmond (George MacKay). A nuclear blast destroys London, and soon the budding relationship between Edmond and Daisy is torn apart as the military arrives to split the boys and girls up.

With the actual plot in mind, the comparison to The Walking Dead may seem misplaced. Stylistically, though, the two appear decidedly of a piece. Both settings can easily be described as rural paradises torn apart by global cataclysm. (Okay, one is a rural paradise and the other is Georgia.) They share the general arc of protagonists struggling to find a new home among the chaos. How I Live Now even shares the TV series' grim outlook on humanity at large. But where Kevin Macdonald's film adaptation of Meg Rosoff's novel rises above the zombie show's endlessly bleak worldview is in its undying sense of hope.

Macdonald manages to present this apocalypse through young, blissfully naive eyes. It removes some of the story's teeth, but what it adds is a much-needed sense of romanticism. There's a haunting sort of beauty to even the way the film depicts its pivotal nuclear attack. The kids are out in a field having a picnic when suddenly the breeze picks up, and the shockwave quietly passes through the valley as snow begins to fall. It's a beautiful bit of visual storytelling before the reality of the situation sinks in. 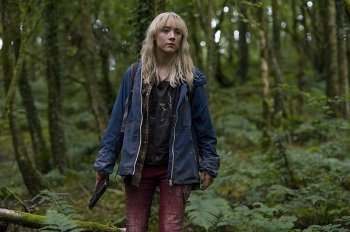 Finally, she's gonna shoot a zombie.Afterward, we're shown in grim detail how low society can fall in the span of only a few months. As Daisy and her young cousin Piper trek across the countryside in search of home, they happen across all sorts of horrors: Thieving drifters; military bases littered with corpses; camps in the woods that only seem to exist for the purpose of rape. And yet the film never seems to dwell on these images for very long. Terrible things may happen, the film seems to say, but nothing is permanent.

And when How I Live Now isn't forcing us to stare the horrors of war in the face, it shows us what real living is all about: A hearty breakfast among family; watching a falcon swoop down across the valley; resting in the shade next to a quiet pond. Even without modern trappings like computers and iPods, normality is remarkably easy to achieve. All it takes to be normal, to be happy even, is to simply enjoy the company of those around you.

In fact, one of the film's largest missteps is that Daisy is generally a one-note character who seems wholly incapable of being happy with anyone. If you're not a dreamboat named Edmond, Daisy really does not have time for your bullshit. When we first meet her, she lives by a rigid set of personal rules that frequently loop in voiceover (or maybe that thing from The Host is still telling Saoirse Ronan what to do). For some reason, one of these rules is "Step outside your comfort zone." She seems content to ignore this one until she's literally forced at gunpoint to step outside her comfort zone.

Maybe it's the characters' sense of naiveté that has me elevating this above The Most Popular Program on Cable Television. On that show, all of the characters' attempts at returning to normality are constantly undercut by the notion that normality is fleeting. The Walking Dead's inexorable march through yet another season demands the perpetual threat of danger. There is no endgame in sight for that show, which is somehow even more distressing than the brutality on display in the show itself.

Fortunately, How I Live Now doesn't have that kind of time. An hour of pitch black nihilism is all it can afford before the film must finally wrap itself up. And I appreciate that. This film understands that we all have better things to do than dwell on the inevitable embrace of death, which is why it grants us small favors like a happy ending. A little youthful romanticism goes a long way, and that's something this genre has been sorely missing.

MINORITY REPORT: Would you believe that after all these years, The Walking Dead is the only program still on the air? It's true! Raiding parties go out every few weeks trying to find their studio, because they're apparently the only ones left with working automobiles. Those assholes are wasting the last gasoline on earth shooting a damn TV show! - Donovan Laird, Future Critic