It's a week of perfectly acceptable movies that don't quite excel this week. I know you'll be thrilled to hear that, what with Gravity still playing. We start with Ian "Professor Clumsy" Maddison on the pleasantly surprising Escape Plan, follow that up with Sean "Keanu Grieves" Hanson on the unpleasantly unsurprising Carrie, then Ian is back with the rather muddled The Fifth Estate and finish with Joseph "Jay Dub" Wade who is suffering from a Big Ass Spider!

EXPECTATIONS: This is one of those films which has the kind of immediate, fun on a Saturday night appeal to millions of drunken men, ironic false nostalgists, genuine action movie fans and anyone with a sense of silliness. Since I fit into three of the four categories listed above, I have a pretty good chance of enjoying this new Sylvester Stallone vehicle, especially as this film also stars Arnold Schwarzenegger.

REALITY: Escape Plan is every bit the film you think it is. It is a film in which Sylvester Stallone and Arnold Schwarzenegger break out of an "inescapable" prison while fighting off cartoonish antagonists and spouting silly one-liners. However, while Escape Plan isn't especially great, it has the element of surprise on its side that elevates it above its schlocky, formulaic template. 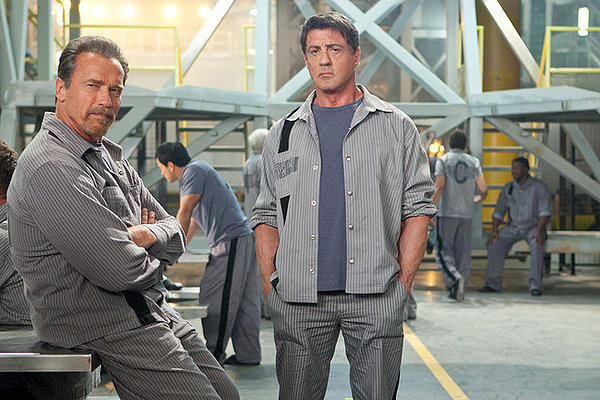 
Ray Breslin (Stallone) is a private security contractor who tests the limits of federal prisons for a living by being locked inside and subsequently breaking out of them. When his business partner (Vincent D'Onofrio) sets Ray up with a CIA contract that will pay double his usual fee, Ray soon finds his human rights well and truly violated in a secret, privately run prison lorded over by the shady Warden Hobbes (Jim Caviezel, channeling Eric Roberts for some reason) and his head of security, Drake (Vinnie Jones). Teaming up with another inmate who shouldn't be there, Emil Rottmayer (Schwarzenegger), Ray begins planning his supposedly impossible escape.

Prison break films of any kind suffer from a fundamental issue automatically. Nobody who designs and runs prisons intends for them to be escapable by plucky tenacious movie stars. Screenwriters can put the word "inescapable" into the mouths of their characters only so many times before they go about disproving it with set pieces so specifically designed that they can only take place in the world's most escapable prison facility. While Ray Breslin is ever watchful of chinks in the armour of his jailors, the screenwriters have to create those chinks to slip him through.

Of course, the accepted way of getting around this issue is to simply make the protagonist some kind of genius savant who can concoct the most elaborate schemes at a moment's notice. Ray Breslin is most certainly that. His tracking of the guards' movements, his scouting out of the solitary confinement areas and his subtle disinformation to the upper brass all start to look more like he is manipulating an extremely flawed system rather than trying to find tiny flaws in a seemingly perfect one. Add to that his confiding in the conflicted prison doctor (Sam Neill) and a lot of Escape Plan starts to feel very familiar if you ever watched the first season of Prison Break. 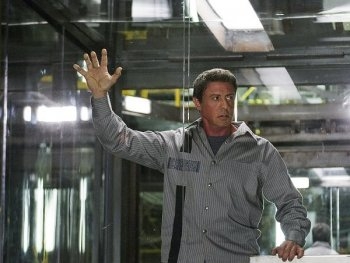 Oh no, I've been imprisoned again!I know it's my job, but it gets to me every time.On top of this, Escape Plan has a completely worthless subplot about Ray's partner acting shifty to his employees (Amy Ryan and Curtis "50 Cent" Jackson) and of course it turns out he was in on it. Why? Makes for a more exciting ending than two old men parting ways on a beach, I guess. None of this needs to be in the film though. You could have kept the entire thing inside the prison with Breslin and Rottmayer playing off each other and finding new ways to surprise increasingly cynical film critics.

Surprise really is this film's primary weapon of choice, and I'm not talking about plot twists either. There are elements to Escape Plan that are genuinely unexpected and most of them come from Arnold Schwarzenegger. He's not as imposing as he once was, he cannot rely on his gigantic biceps to carry his screen presence and he was never an especially skilled actor, so all he has left are charisma and sincerity, both of which he has in spades. If you remember January's The Last Stand, you'll probably remember a scene in which Sheriff Schwarzenegger explains to one of his deputies that he is probably more afraid than her because he's seen enough blood and death and he knows what's coming. In that moment he brought his entire history of violent movies along with him and he does the same in Escape Plan a few times.

In this film, Schwarzenegger appears very much as a frail old man, which Hobbes sees as a weakness to manipulate, but of course we all know that he is Arnold Schwarzenegger and he's movie tough. Movie tough isn't the same as real tough. It's the the kind of toughness that allows a frail old politician to throw a punch that sounds like a nuclear explosion. A knowing look in his eyes tells us all we need to know about what he is going to do, which will probably involve huge guns.

In one scene, Rottmayer is called upon by Breslin to fake a breakdown as a distraction. When doing this, Schwarzenegger plays it to the hilt, screaming and crying in German. This is the most actual acting that Schwarzenegger has done in his entire career. The sincerity of it is almost heartbreaking as we see this old man beyond the limits of language. As much as "I'll be back" is Schwarzenegger's most remembered line, I can't help but think that his pained cry of "Ich reiße dir die Augen aus" is going to stick in my mind much more readily. This is Arnold Schwarzenegger trying his hand at character acting.

These moments, and a few others besides, do just enough to make Escape Plan a film well worth checking out. As a whole, it's not going to set the world on fire, but at its best it is very entertaining and memorable. I have seen this film compared to Papillon, the 1973 Steve McQueen-starring true story of a man who escapes from a supposedly inescapable prison island. I found it had more in common with Django Strikes Again, the 1987 Franco Nero vanity project about an Italian movie star who wanted to be Arnold Schwarzenegger. In that comparison, Escape Plan most certainly comes out looking like the better film.

MINORITY REPORT: If he's a career escape artist, the tattoos on Ray Breslin's 90-year-old torso must be getting mighty confusing by now. - Sean "Keanu Grieves" Hanson