Our movies come in strangely connected pairs today. Kicking us off, we have Ender's Game and Jackass Presents: Bad Grandpa exploring the implications of a simulated reality to the befuddlement of Ian "Professor Clumsy" Maddison and Sean "Keanu Grieves" Hanson respectively. Then we have some prestige pictures with Michael Fassbender and Brad Pitt to get some early awards buzz in the guise of The Counselor and 12 Years a Slave, both of which prove frustrating to Joseph "Jay Dub" Wade and Martin R. "Vargo" Schneider.

EXPECTATIONS: This is yet another film adapted from yet another best-selling young adult novel series that I haven't read. I do know that the author of said novel series is an irredeemable homophobe who hopes that the people he openly hates will be able to "tolerate" his beliefs. Unless that message is overtly reinforced by the movie, I'll go no further than saying that I expect this to be about as good as The Hunger Games was, even though it is helmed by X-Men Origins: Wolverine director Gavin Hood.

REALITY: Fortunately, Ender's Game offers no hateful messages or right-wing diatribes. It is, in fact, rather more progressive and self-critical than I could have expected. Unfortunately, it is rather dull. Ender's Game gives the impression of being a bedtime story told by an old man who doesn't understand the things his grandkids like but wants to relate to them anyway. "You kids like video games, don't you? I don't know what they are, but here's a story about them anyway."

Andrew Ender Wiggin (Asa Butterfield) is a young boy being pushed through a military training school by Colonel Graff (Harrison Ford) and Major Anderson (Viola Davis). The pair manipulate the gifted Wiggin through various social situations to observe the tactical decisions he makes. After proving himself sufficiently, Wiggin is transferred through various schools in the hopes that he will single-handedly win a war against a race of insect-like creatures.

That's what the plot looks like when you pare it down to its most basic elements, but it really is much more elaborate than all that and it is perhaps to this film's credit that it is able to race through its dense plot in less than two hours. Perhaps not, though, as this story could probably be told with fewer than four changes in the character dynamics. Wiggin goes from bullied schoolboy to social outcast gaining respect to space-sports underdog with romantic designs to star pupil and saviour of the universe. What could have been a much simpler concept, "social underdog in a high school setting transcends his status with a violent and shocking twist," is confounded again and again by repeated reversals in the dynamics.

The majority of the film takes place in the orbiting combat school, wherein the children learn to shoot each other in a zero-gravity environment. It is framed as a game, ostensibly a high school sports movie in space, in which teams are encouraged to excel through cooperation and leadership. After excelling at this little game, Wiggin and his ragtag group of misfits are escalated into carrying out full-blown battle simulations on a captured space-ant colony which turn out not to be simulations after all, but actual acts of remote-controlled war. Interspersed throughout these events, Wiggin plays a strange video game that requires him to repeatedly make a choice between two equally poisoned wine chalices while he is mocked by a troll. 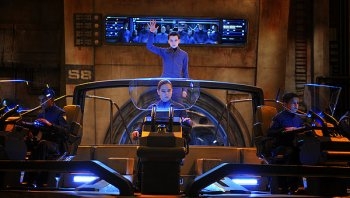 The future of Kinect.

With all these simulations and false no-win scenarios, it's all very reminiscent of Star Trek II: The Wrath of Khan. In a lot of ways, Ender's Game highlights the kind of narcissistic hypocrisy of Captain Kirk by way of the kind of grim hopelessness that permeates children's fiction in the modern era. Thought Star Trek was altogether too enjoyable? Give Ender's Game a try. What Ender's Game suggests is that the current generation is entrenched in a parallel existence between the real and the simulated. It isn't that it believes they cannot tell the difference and that simulated violence begets real violence. Quite the opposite, it suggests that the difference is everything.

To use a real-world example, let's look at the recently released Grand Theft Auto V, a game that delivers an incredibly detailed environment and invites players to be sociopaths. It is a consequence-free infinite catharsis generator wherein nothing matters, not even the finality of death or the horror of imprisonment. Your transgressions are simply forgotten and you are returned to the world to do it all again. Compare this to the combat simulations that Wiggin and his team of child soldiers undertake. In the final act, they go to any lengths and suffer any cost to beat the simulation, going so far as to sacrifice an entire fleet to wipe out an alien race, an act for which they receive accolades.

To beat a simulation, no cost is too small because the cost is not real or human. In reality, a suicide mission to commit genocide is ethically deplorable to us. Just as you wouldn't steal a car, fire a machine gun out the window into a crowded city centre and get into a lengthy firefight with the U.S. military before escaping in a helicopter that you crash against the side of a bridge in a fiery explosion just to let off steam after a rough day at work, you would not, by that same extension, apply a theoretical, consequence-free strategy to your actual life unless you were a genuine sociopath. The lessons Wiggin learns and subsequently applies in the simulated situations really have no application in an actual battle scenario. His empathy would get in the way of his carrying out these actions. However, Graff knows that removing the fear of consequence would lead to a level of decisive action that could win a war. 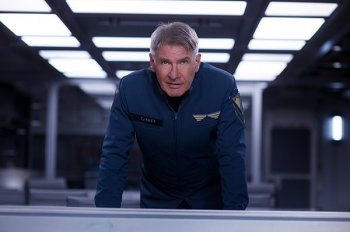 Harrison Ford smiles!While this does border on being an interesting concept, you can perhaps arrive at more revealing conclusions by actually playing Grand Theft Auto V for a few hours and pondering the very same. The main difference here is that Grand Theft Auto V knows you better than Ender's Game claims to. I should be glad that this film for a young audience actually attempts to deal with such a complex idea at all, especially framed in the context of educational facilities as it is, but it is such a sad and hopeless piece of work.

What does this film have to say about education, then? That it is yet another example of a simulated existence? One thing it does suggest is that a country (or even a planet) might be better served by focusing itself on, and pushing gifted children through, a specialised education that best serves its needs. But, what then? Is that any different to a generation of children raised on the simulated war-without-consequence in violent video games? Or are violent video games simply innocuously cathartic? In one scene of Ender's Game, Wiggin makes a violent choice in a game whose parameters do not seem designed to allow such a thing, stating as he does so that "this is what they expect from us."

And what do we expect from Ender's Game? Let's face it. We expect entertainment on some level, don't we? Ender's Game doesn't really provide in that area. The cast all do some excellent work, especially Butterfield, who, between this and Hugo, is proving to be a stellar young talent, but the material they deliver is so stilted and weird with the most bizarre sense of structure. There is no reason for this film to be so muddled, and it is presumably out of reverence to the source material. For a film so densely focused on its central idea, it seems odd that the plot would be so unfocused around it.

The ultimate question raised by Ender's Game is one that we've heard shouted hysterically by censorship groups and uptight moralists our entire lives: Just what are we teaching our children? Ender's Game offers no real answers, but at least acknowledges that it is in itself a part of the cultural atmosphere that a disillusioned generation of catharsis-seeking children will absorb and take on board. Sorry kids, Ender's Game seems to say, but your future is hopeless and not really your own.

MINORITY REPORT: ...and we still can't get a theatrical film based on Maniac McGee. Between this and The Hunger Games, we're raising a generation of violent depressives, which makes Ender's Game sort of a self-fulfilling prophecy. Bring on the insect-like aliens, I say! - Sean "Keanu Grives" Hanson