EXPECTATIONS: Even though I spend so much time alone in kids' movies that my local theater has me on some sort of watch list, the original Diary of a Wimpy Kid managed to fly completely under my radar. I was surprised to hear of this sequel, because I was under the impression that the first one had bombed. (I was apparently horribly wrong about this.) Because I know nothing about the book series, I tried using this as an excuse not to see this movie, but everyone seems to think I'm smart enough to catch up. Well, I'll show them how dumb I am! Wait...

REALITY: You know what sucked? Middle school. Don't tell me it didn't, because it did. Even the kids who would go on to be popular in high school had a tough time in middle school, because it's physically and mentally the most awkward period in a human's development. For about three years you don't walk, talk, or think like a normal person, which is made all the worse by the fact that for those three years all anyone wants is to be normal and blend in. Middle school is a cruel joke played on us by an unloving God, and this film knows that, which makes it all the better. 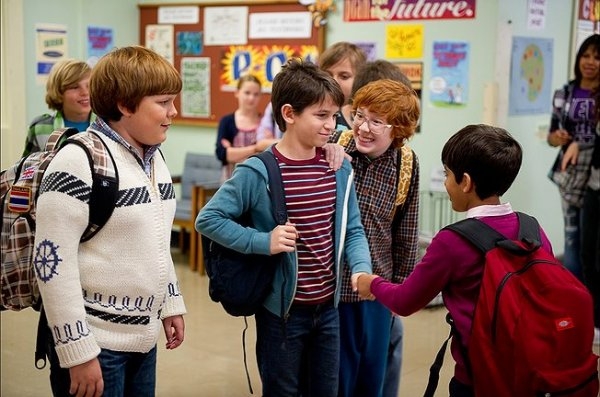 The movie follows titular wimp Greg Heffly (Zachary Gordon) as he enters the seventh grade and tries his hardest to be cool in order to impress the new girl in town, Holly Hills (Peyton List), even though no one is cool in the seventh grade. Greg isn't good at sports, he's lazy, he thinks way too hard about small things, and he has no sense of social norms. If you're reading this site, you were Greg Heffly at one point in your life. Greg's quest for coolness is beset by roadblocks in the form of his comic-relief friends Rowley (Robert Capron) and Fregly (Greyson Russel); his overbearing parents (Rachael Harris and Steve Zahn); and his older brother Rodrick (Devon Bostick), whose mission is life is to torture Greg and to wear guy-liner, but mostly the torture thing.

The story revolves around the relationship between Rodrick and Greg, whose parents are forcing them to bond. When the two get into a very public fight, Mom and Dad do the most logical thing possible and leave them unsupervised for two days. Obviously, a party is thrown and then a fast clean-up sequence because Mom and Dad are coming home early (We call this Generic Sitcom Plot 32A), resulting in a quickly replaced bathroom door. The secret gets out, undoing all the bonding that the boys have... you know what? I'm gonna stop the plot summary right here, because it's long and goes nowhere. The movie feels like a test pilot for a Diary TV show (which is not an idea I'm against), and as a result, it gets padded a lot. There's only about sixty minutes of story in this eighty-minute movie, so we fill it with the ten-millionth verion of "Tik Tok" this year, and spending a large amount of time on a fake horror movie-within-a-movie called The Foot, which the boys watch. I'm not complaining on that one, because The Foot looked awesome.

I've spoken a lot, in the past, about how childrens' movies should be treated with as much care as any other, if not more, and Diary is a perfect example. Here is a movie that is unashamedly for kids, and yet it pulls no punches about its subject matter. The kids in this movie are weird, uncomfortable and sometimes overly mean to each other, because that's how kids are. As a result, this kids' movie has a good deal of funny moments, and I mean genuinely funny, not "funny for a kid's movie" or "jokes thrown in for mom and dad." Because Greg is a relatable character, watching bad stuff happen to him is cathartic, and it's easy to root for him, even if he spends part of the movie being kind of a jerk. 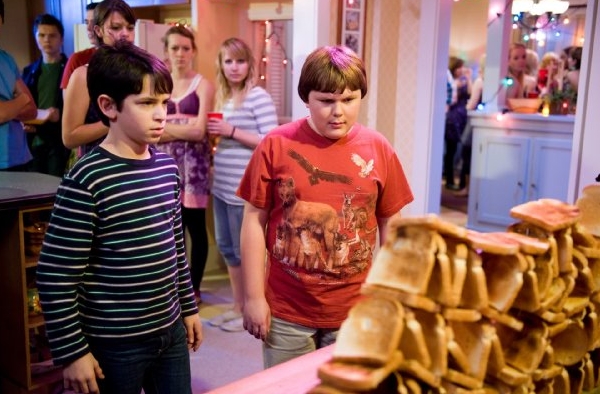 This is what happens at parties when you can't have beer in your movie.

Overall, Diary is a pretty solid family comedy, but it did leave me with a few complaints. Steve Zahn's performance felt like kind of a waste to me, because I can't think of anyone more qualified to play "gooberDad" than Steve Zahn. Unfortunately, for most of the movie he does nothing but sit silently in the background and make funny faces. Also, the movie starts in some bizarre universe where a teenage boy can summon a mosh pit on roller skates out of nowhere, and then drops this in favor of a more realistic approach.

Then there's the issue of Chirag Gupta (Karan Brar). What is with this kid? They added a wacky Indian kid for the sake of having a wacky Indian kid, then didn't even bother with a decent Indian accent. Somehow, this movie that is basically three sitcom episodes mashed together packs an entire season of Outsourced into this one annoying minor character. This is forgivable, however, because one of the film's many subplots involves Greg getting the whole school to pretend this kid is invisible, and that's pretty damn cool. (Chirag then tries to trick everyone into admitting they can see him, with some funny results.)

Between this and Mars Needs Moms, I don't want to turn this into "Parenting Advice Theater" (We'll save that for my upcoming book, Makin' Babies With Vargo), but I really feel that Diary had more of a message for the parents than it did for the children. Even though the title tries to tell us that Rodrick is responsible for all of Greg's problems, it's pretty obvious that most of them actually stem from his mother's determination to make everything in her house appear perfect. I haven't hated a movie Mom like this since The Fighter.

Overbearing, micromanaging parents producing fucked-up kids is a theme in this movie: Even though leaving your two fighting sons alone for the weekend as punishment is a horrible, horrible idea, it's not until Mom backs off and lets the kids work out their shit on their own that anything gets accomplished. Basically, helicopter parents need to let their kids be kids, and chill out. Also, something about brothers and the importance of family and blah-blah-etc.

Despite its faults, Diary is a smart comedy with a lot going for it. It balances realistic situations with cartoonish sensibilities, which basically makes it Doug or Hey Arnold! for a new generation. And there's nothing wrong with that.

MINORITY REPORT: I remember being a young kid too. I used to run around pretending I was interesting and popular. And now look at me! - Ian "ProfessorClumsy" Maddison