It's sci-fi/fantasy fun for the whole family this week! Dads and teenage boys will thrill at the alien-invasion antics in Battle: Los Angeles; the younger kids will be kept relatively quiet by slightly different alien-invasion antics in Mars Needs Moms; the teenage girls will gasp at the phallic goings-on in Red Riding Hood. Oh, and the pretentious twenty-somethings who live in the basement will get smug satisfaction from festival favourite Cedar Rapids.

EXPECTATIONS: The trailers paint Battle: Los Angeles as a deeply personal war film that uses an alien menace to evoke the great American fear of being outclassed by an unknown enemy. This has the potential to be a bold and interesting film, one that exploitatively draws upon memories of 9/11 to pierce the imagined bubble of safety that has been constructed around this corner of the world.

REALITY: It would be unfair of me, and frankly untrue, to say Battle: Los Angeles was entirely terrible or that it fails to make any kind of statement. However, it feels like a boat-load of wasted potential in that everything it sets out to do is achieved in the safest, most inoffensive way possible; "not entirely terrible" is, in fact, the highest praise I can muster.

Battle follows a small group of United States Marines, led by Staff Sergeant Mike Nantz (Aaron Eckhart), as they are plunged with little warning into a full-fledged combat situation against extra-terrestrial beings. That's pretty much it as far as plot is concerned. 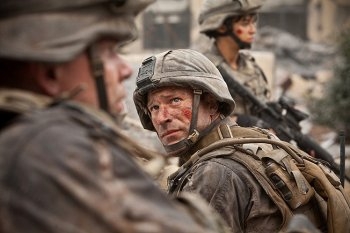 Chin-straps can't keep a chin like Eckhart's down.At some point, our heroes run into another group of Marines and an Air Force Sergeant (Michelle Rodriguez). They also rescue a handful of civilians (including Bridget Moynahan and Michael Peña), but these characters all just get lost in the crowd. It is notable that the ensemble has been cast with an eye toward multi-culturality. I had initially thought this was a commendable salute to the multi-culturality of America and a patriotic pride that is refreshing in the shadow of most "patriots" bemoaning the loss of their country to minorities. However, it later occurred to me that in a film where almost every character is wearing a uniform, the multicultural casting does something that the limited script cannot; it helps us differentiate between characters who would otherwise be interchangeable.

There are plenty of action-movie heroics from Eckhart and company to keep things interesting, and the hand-held cinematography is very effective in building a sense of unknowable dread, even when viewed through the eyes of unstoppable, flag-saluting Super Americans. One particular sequence that takes place on board a bus balances everything that does and does not work about the film: The characters exist with nothing to do but be incredibly optimistic about their superior American-ness in spite of their situation, but the scene itself certainly is exhilarating.

Now on to my main problem with the film. Going in, the Marines have absolutely no information about their enemy. They soon find them to be literally unkillable, in spite of the sheer amount of ammunition they pour into them. This is up until a scene in which Eckhart tears a stunned alien apart with his bare hands, stabbing at anything that looks like it might be a major organ to see if it finally dies. This continues until the creature is a gurgling husk of fleshy mucus and they stumble upon a sac of fluid that finally kills it. Considering that a previous scene (and later scenes) imply that the aliens are simply innocent grunts ordered to war in order to acquire materials that will help to further their existence, ensuring that this one lived out its final moments being ripped to shreds and perforated in every organ leaves a sour taste in one's mouth. When you consider that the information gathered from this torture is merely "shoot them to the right of their chest," it makes you wonder how they never managed to hit upon this by accident earlier, back when they were unloading their assault rifles into the bastards. 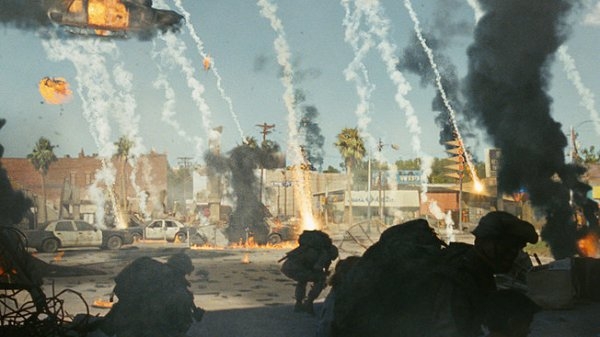 As the title suggests, most of the film involves a battle that takes place in the city of Los Angeles. I can be informative too!

What makes it worse is that this scene is never again referenced, even though one of the characters involved in this dissection is a civilian (chosen because of her veterinary experience - I know, that makes no sense) who should otherwise be mortified by demolishing a living creature with such gusto. Other civilian characters get involved in other ways that make it seem like the film is preaching the Great American Gospel; in times of war, even the civilians had better be prepared to get their hands dirty or be forever damned for being un-American. But then later we have scenes in which the Marines disobey orders from the higher-ups because they just want to stay in the fight, obviously not realising that they're no good to the war effort if they collapse from exhaustion and hunger. And what the hell is Michelle Rodriguez's character doing? She's an Air Force Sergeant who decides to tag along with the Marines, presumably because Marines are so damned American. But, wouldn't her training be put to much better use elsewhere? I'm sure her commanding officers will be thrilled that she decided she was a Marine all of a sudden.

The mixed messages all seem to point to some grand statement about the occasionally contradictory nature of religious fundamentalism reflected in Patriotism, something that a great deal of Americans believe in with great zeal. However, it never feels like this statement is resolved in any satisfactory way. Maybe if they'd had the strength of their convictions to carry this to a more solid conclusion, it wouldn't feel so safe and innocuous. But, perhaps my not being an American causes me to look upon these things with less warmth than is expected from its domestic audience. My money is on the former.

MINORITY REPORT: The aliens in this film look like one of Dr. Wily's robot masters took a shit on an assault rifle. If that's supposed to frighten and disturb me, it does, but probably not in the way they intended. - Joseph "Jay Dub" Wade

Challenge: Go to LA around 4:30, on the I-5 Freeway, in August, and tell me you're not okay with aliens taking the damn place. - Martin R. "Vargo" Schneider