We came close to having another of those weeks when there was nothing worth watching, what with the bitter disappointments of Immortals, J. Edgar and the bizarre Trespass. Luckily, along comes the apocalyptic Take Shelter to brighten our lives with the reminder that movies can be good. Not Footloose good, but still good.

EXPECTATIONS: Greek mythology is in vogue at the moment. The stories are timeless, lending themselves to countless cinematic adaptations, but in recent years it seems that everyone has gone Greek. And now Tarsem Singh, a director famed for his incredible visual inventiveness, has turned his eye toward Mount Olympus. Am I excited? Not in the least.

REALITY: I think it's for the best if I'm frank about this: Immortals is an occasionally boring and politically confusing film that reinforces the establishment's right to remain and demonises the self-motivated. It's like a soused, Wodehousian duke drunkenly lamenting the tenacity of the nouveau riche muscling in on his rightful wealth. Then again, that might actually be the point. 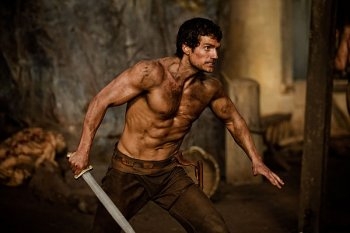 This blend of Arnold Schwarzenegger and Cristopher Reeve is Henry Cavill, future movie star.The story revolves around young peasant warrior Theseus (Henry Cavill) and his attempts to stop King Hyperion (Mickey Rourke) from acquiring the Epirus Bow that will give him the ability to release the imprisoned Titans and destroy the Gods (led by Luke Evans as Zeus) as per the prophetic visions of Oracle Phaedra (Freida Pinto). It's never really explained why destroying the Gods would be a bad thing or why the Titans are a force that should never be unleashed, which makes the plight of the protagonists difficult to care about. The heroes are handsome and charming, while Hyperion and his band of grotesques are like something Clive Barker would dream up, except in his take they would be the protagonists.

It would take only a very slight change of presentation to make Hyperion the hero of the film. He is a man who came from nothing, lost his family at the whim of the Gods, and decided to make himself and those who chose to follow him into monsters for the sake of war. He is a powerful man with a warrior's philosophy, like Colonel Kurtz from Apocalypse Now. Unlike most film antagonists, he deals not in death, but rather in maiming, disfigurement and self-mutilation. His "minotaur" The Beast (Robert Maillet a.k.a: "Kurrgan") is a sight to behold, always working away at a bronze bull or putting the poisonous finishing touches on his barbed club or destroying people's genitals with a wooden mallet. If anything, it would have been great to see them go even further with this stuff. Make the minotaur the lead and fill the movie with scenes of him masturbating with hot coals to the idea of pleasing his king by skull-fucking Theseus to death. Or is that too much? 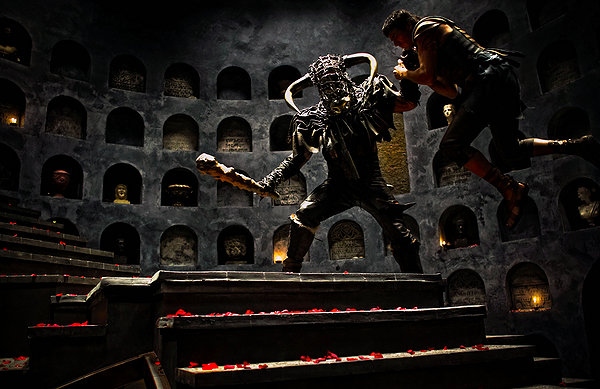 By steeping the villains in such unusual and fascinating imagery, Tarsem has fallen into the same trap that David Lynch did when he made Dune. You want to see Sting hanging out in his codpiece while Paul L. Smith drinks juice freshly squeezed from a small creature, but eventually you can't be bothered to watch anything else that's happening. The Titans are perverse, yet fresh and exciting in all the right ways, and this just makes the heroes that much less interesting. Theseus is generally heroic merely because he is expected to be; in the hands of a less charismatic actor, this character (as written) would be completely unwatchable. He is driven by revenge, just like Hyperion, but what sets him apart is that he has the direct support of the Gods. Of course, if Hyperion had any kind of support from the Gods, he wouldn't be pursuing his vendetta in the first place. Hard to believe that Theseus has the gall to preach to people about having faith in the Gods. I guess it's easy to have faith when they decide you're worth their time, especially given that Theseus is depicted as someone who doesn't have any kind of faith at the beginning of the film.

For all its flights of fancy, Immortals seeks to present a certain level of grounded believability. The film is bookended by artistic interpretations that better represent the legends we all know from the time, whereas the rest of the film is painterly in a much different way, full of reminders that the monstrous entities are definitely human and that the Gods and Titans are mortals who bleed and die like everyone else. They want to separate the film from the classic mythology. Sometimes this works and sometimes it doesn't: I've already covered the villains, but there are so many missteps in this film's presentation. For example, when Theseus faces the minotaur, he does so in a mausoleum in the centre of a labyrinth. The labyrinth itself makes no logical sense; it merely serves to bring to mind all the stories we've already heard. But then we get the magical bow and the selectively super-powered heroes to make it all suddenly fantastical. 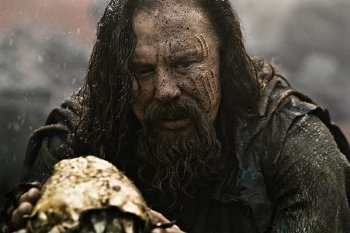 This film's fearless hero/villain.This jumbled presentation makes the whole film rather puzzling from a political perspective. It seems that we are expected to root for the Gods' continued survival, rather than their downfall, but we are never given any reason to do so. The Gods are young and vain, but they do "awesome" stuff and wear shiny gold armour, while Hyperion and the Titans are frightening to behold. It all leads to a big cloud of ambiguity that hangs over the whole thing. Ambiguity can be good, because it often leads to continued discussion of a film, but here it is just unsatisfying. They never quite pull it far enough in any direction to make it feel like it has the strength of its own convictions.

Finally, Immortals often falls into the trap of being dull. There is very little romance or humour to any of the characters, which leads to everyone being flatly stoic and unappealing. Theseus and Phaedra have a bit of a thing going on, but they never really show each other any warmth or affection where the film could have used some. Plus, we have Stavros (Stephen Dorff, remember him?), a thief who accompanies Theseus on his quest. He is set up as a comedic character, but he never actually does or says anything funny, and then he stops showing any signs of personality at all as the second act comes to a close.

Your mileage with Immortals might well depend on how much the film's impressive imagery appeals to you. If you don't have an eye for creative visuals, then you may find the whole thing incredibly boring. Otherwise, you'll either be put off by the noncommittal ambiguity of the whole thing, as I was, or be impressed by the variety and diversity of artistic influences and visual flourishes, even if Tarsem Singh et al. never quite take them to satisfying extremes.

MINORITY REPORT: How exactly did they land on Mickey Rourke for the villain/hero for an artsy Greek myth action movie? More importantly, how many bottles of scotch were involved? - Joseph "Jay Dub" Wade