The Way Way Back

With most of the Current Releases crew mortally wounded or otherwise engaged, we have only one review for you this week: Joseph "Jay Dub" Wade's anti-nostalgic appreciation of The Way Way Back.

The Way Way Back

EXPECTATIONS: I have faith that first-time directors Nat Faxon and Jim Rash can produce a film every bit as hilarious and touching as their writing debut (Alexander Payne's The Descendants) seemed to think it was. On the other hand, if the audience I'm seeing this with offers any indication, The Way Way Back promises to be the WASPiest feel-good picture of the summer.

REALITY: Nostalgia exists somewhere at the crossroads of past and present. As time marches ever forward, our history is there to remind us of where we've been, how far we've come and, in some cases, that we're still where we've always been. To call The Way Way Back an '80s coming-of-age story isn't too far off, but at the same time it's a film with an oddly endearing sort of contempt for a bygone era. 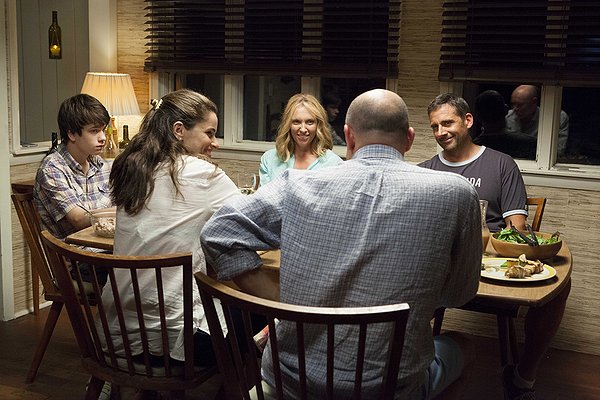 
14-year-old Duncan (Liam James) and his mother (Toni Collette) travel to spend the summer at a beach house with her boyfriend Trent (Steve Carell) and his daughter (Zoe Levin). On the way, Trent asks Duncan how he sees himself, on a scale of 1-to-10. When Duncan sheepishly guesses a 6, Trent corrects him. "I think you're a 3," he says.

This conversation sets the tone for the rest of the summer, as shy loner Duncan desperately tries to hide from Trent; Trent's party-animal friends Kip and Joan (Rob Corddry, Amanda Peet); and Betty (Allison Janney), the gregarious lush next door. Duncan eventually finds a place for himself at the Water Wizz water park, where fast-talking huckster and park manager Owen (Sam Rockwell) takes Duncan under his wing. He gives the kid a job and in the process teaches him to open up to Betty's daughter (Annasophia Robb), whose family is similarly splintered.

The Way Way Back bears a striking resemblance to Greg Mottola's criminally underrated Adventureland. However, while the latter film evokes '80s nostalgia in subtle ways, using tacky pop tunes as signposts of the film's era, this film has both its feet planted firmly in the present. At one point, Owen mentions that the water park's original owner refused to update its look, leaving the film's entire setting to appear perpetually stuck in 1983. He tosses out that nugget of wisdom offhand, but it's crucial to understanding this film's dilemma with nostalgia.

Water Wizz looks the same as it did thirty years ago, and Owen has not only been working there long enough to know this, but also he still lives in the ratty old apartment overlooking the park's snack bar. The film appears trapped in its '80s nostalgia, and the adults that populate it seem wholly terrified of letting that go. Owen speaks in '80s song lyrics and references movies like Footloose. He's still playing Pac-Man in pizza parlors and ogling the girls at the waterpark the way he did as a teenager. Meanwhile, Duncan's mother and her neighbors treat the beach as an opportunity to retreat back to their youthful ways, spending long, drunken nights on the beach and smoking pot at neighborhood cookouts. 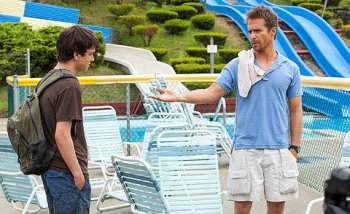 Look, would you just slap the man some skin already and get this over with?Because we see the whole film through Duncan's eyes, everything about this setting feels alienating and disturbing. It is weird that Owen lives in the water park where he probably grew up. It is sad to see Lewis (Jim Rash) dream of being a storm chaser while wasting away in the lifejacket booth. And it is downright creepy to watch Trent's drunken friends grind up on an unsuspecting Duncan for shits and giggles at a house party. Every adult in this film is broken to some degree, and all we can do is watch in horror and hope Duncan doesn't wind up living the same way.

That said, The Way Way Back isn't all doom and gloom. Far from it, in fact. The coming-of-age vignettes in this film are adorable, and many of them are also hilarious. Parents always tell their kids that a summer job helps build character, and that's never been more true than it is here. Duncan's first task on the job is to break up a circle of breakdancers, because that's apparently something people do after paying admission to enter a waterpark. Through the magic of coming-of-age cliches, Duncan endears himself to the breakdancers and walks away with a new nickname and a newfound respect for himself that continues to grow.

Little events like this pop up throughout the film, and they provide some much-needed warmth to offset the domestic drama that brews whenever Duncan returns to his family at the beach house. At times it seems like too stark a contrast, almost as though things would be better served had they developed both stories into their own films. I would love an entire movie about Sam Rockwell and Maya Rudolph's characters running the waterpark together, but then that might defeat the purpose of featuring both settings in the same film.

It helps that Liam James is already kind of a gawky teenage kid. It's not much of a stretch to see Duncan slowly grow a spine during the course of the film, and he does a fine job of selling his character's evolution. Similarly, the character of Owen seems tailor-made for Sam Rockwell. Some have pointed out shades of Bill Murray in his performance, but to me he comes across more like Ferris Bueller at the age of 40, if we're keeping with the whole '80s theme.

While the lion's share of The Way Way Back focuses on Duncan's growth over the course of the summer, that leaves the rest of the film seeming a bit underdeveloped. The conflict between Duncan and Trent eventually comes to a head, but it feels like it's too little too late. I think Faxon and Rash rightly find the waterpark story the more interesting of the two, even if maybe there isn't any drama to be found in the quest to pass someone on a waterslide.

MINORITY REPORT: I myself once managed a water park in the swinging '80s. It was there that I met my first love Lawrence, a man of infinite jest and not-so-infinite lung capacity. He is sorely missed... and the investigation was inconclusive. - Montague "Legally Sane" Smythe