Green Lantern is finally here, which means we only have a billion more superhero movies to go this summer, much to the joy of superhero-hating Ian "ProfessorClumsy" Maddison. You can also embrace the silliness of the most-fart penguins with Mr. Popper, or check out Woody Allen's time-traveling shenanigans in Midnight in Paris.

EXPECTATIONS: Hooray! More superheroes! At least this time it's from DC, which means we're not going to be watching yet another preamble for The Avengers. Instead, hopefully, we're going to see something that can actually stand alone as its own film. But then, this is still a superhero movie, and I'm pretty sure there's nothing new to be seen in this genre. Plus, the trailers and clips I've seen make this look like a terrible mish-mash of ridiculous visual effects and ludicrous plot contrivances, so I'm not holding my breath.

REALITY: Let's not beat around the bush here: Green Lantern is a bad film. A very bad film. It's dull, it takes itself far too seriously (even when it's trying to be funny), and it's so poorly paced that it feels like it's about four hours long. It's also the best super-hero film that isn't a prequel or parody since The Dark Knight, and considering how many there have been in those few years, that should be high praise. But, it isn't. The Green Lantern is a shining jewel in a genre full of festering horse-apples. (Ed. note: "The Green Lantern is a shining jewel!" -- Something Awful [poster blurb]) 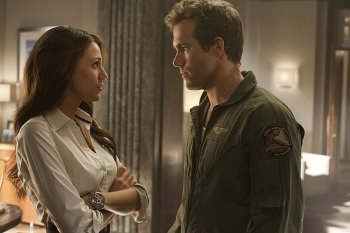 This is what romantic chemistry looks like... apparently.When I talk about superhero movies, I'm really referring to a very specific formula. A young man - usually a white American who is either an outsider (like a nerd or someone with emotional issues) or a reckless, irresponsible loose cannon - acquires some incredible power or an incredible sense of duty and purpose in his own abilities and becomes a superhero. They then learn that in order to wield such power, they must earn it by accepting a society that effectively cast them out and/or by learning responsibility. However, they are not prepared for that and choose instead to try and get "the girl," who usually suddenly comes under threat (along with the rest of America or Earth or New York City), forcing the young man to do the right thing and use his powers for the good of mankind.

Green Lantern chooses the reckless, irresponsible character model in Hal Jordan (Ryan Reynolds), a test pilot who inherits incredible powers, this time from a mystical ring and lantern, given to him by alien peace-keeper Amin Sur (Temeura Morrison). Hal discovers that his duty is to the Green Lantern Corps, led by Sinestro (Mark Strong), an intergalactic group of space police who fight injustice and evil wherever it may appear. He shirks his new responsibilities until the girl he loves, Carol Ferris (Blake Lively), and the rest of Earth comes under threat from the evil being Parallax (Clancy Brown) and his possessed sidekick on Earth, Hector Hammond (Peter Sarsgaard). You can probably guess how it all ends.

This is the kind of craziness the film needs more of.

So, what sets all these formulaic superheroes apart? Their amazing powers? Spider-Man could do everything a spider could; Superman made you believe a man could fly; Green Lantern can manifest green things from his imagination. Yeah, it's kind of bizarre, even on paper, and it leads to some stupendously goofy moments. Hal conjures green jet planes, Hot Wheels racetracks and giant fists. If the rest of the film didn't take itself so seriously these crazy green props would have seemed inspired, but as it stands they just stick out like a sore, green thumb. Likewise, the supporting cast of Green Lantern characters, including a giant pig man (Academy Award winner Michael Clarke Duncan) and a walking fish (Academy Award nominee Geoffrey Rush), are all realised in gloriously silly CGI. Peter Sarsgaard has a very bad case of ridiculous-villain-with-a-big-head syndrome, which is fine when it's treated with alacrity and not such straight-faced pomposity. 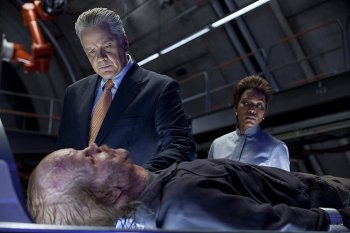 Oh yeah, Tim Robbins is in this too.That's Green Lantern's biggest problem: pomposity. There are a lot of fun, zany, ridiculous ideas and visuals in here, but they're all presented in miserable-scope, where you're not allowed to laugh at anything, even jokes. As an example, the best joke in the film comes early on when Hal explains to his best friend (Taika Waititi) that he found an alien and it gave him a ring; the response he gets is "He proposed?" That's a decent joke, but nobody laughed. It's as though the film itself is not amused by its own light-heartedness and goes out of its way to be as dark and edgy as possible, even when the hero is manifesting giant springs to bounce a gas truck at a giant monster, complete with "boiiiing!" sound effects. I'm not actually sure how they managed this, but every quip, outrageous set-piece and off-the-wall visual effect falls flat. It's impossible to take this film as seriously as it takes itself, so you'll never be on the same page.

And it's not just audiences who aren't on the same page. I couldn't shake the feeling that most of the cast members were under the impression they were making a much lighter, more enjoyable film. They're trying their best to have fun with it, but even Ryan Reynolds seemed to be under instruction to leave his charisma at home. I even seem to recall Mark Strong having an enormous head in early trailers, but I guess they put that to bed. Someone, somewhere took a look at the film they were making and said, "You know, after Batman, people don't want silly superheroes anymore." And so the lazy afterthought to make everything dark and scary came along and all the fun was sucked out of the film.

I don't ordinarily have a problem with formulaic cinema, it occasionally produces masterpieces, becomes self-deconstructive and pushes filmmakers to do anything to surprise its audience. It's just a damn shame that this is the best example in years to come from the superhero formula. It's also a damn shame that one of this film's most redeeming qualities is that it isn't a precursor to something else, like all those damned feature-length Avengers trailers we've been seeing from Marvel.

MINORITY REPORTS: It seems odd to me that out of all the possible directors out there with experience in manipulating space operatics and big CGI set-pieces, Warner Bros chose the guy whose only claim to fame is rebooting James Bond twice. Maybe when Warner finally wants to get serious about Green Lantern, they'll hire Martin Campbell to reboot himself. - Joseph "Jay Dub" Wade