This week's cinema rollercoaster starts off at the bottom with the absolutely terrible Riddick; picks up a bit with the interesting but not great Getaway; plows straight through the dull-as-dishwater Closed Circuit; and somehow ends the ride at a high point with the genuinely good I Declare War.

EXPECTATIONS: Easy jokes about the film's title aside, there's not an awful lot to say about the latest installment in the failed-to-launch franchise of Vin Diesel vehicles that began with 2000's Pitch Black. This third film seems set to return to the roots of the Riddick concept and have the funky-eyed convict facing off against a horde of ugly nocturnal monsters with a team of incompetent mercenaries at his heels. Personally, I can't get over the terrible dialogue in the trailer ("That was five seconds!") long enough to even begin to care about the core concept.

REALITY: Do you ever get that feeling when you're watching a film or a TV series, or maybe reading a book or playing a video game, where you suddenly realise that what you once thought could be enjoyable is not only not the same thing anymore, but also it has become irredeemably boring and trite? Riddick inspires exactly that feeling in me. During the surprisingly muted and amusing first act, I was half-convinced that this tawdry, poorly written attempt at a sci-fi fantasy epic might actually turn out to be somewhat interesting. Then came the rest of it: the horrible, hateful, mind-numbingly dull rest of it.

Just looking at all these guys again reminds me of how bored I was the first time around.


We begin on an unforgiving planet where the titular Richard B. Riddick (Diesel) has been left for dead by Karl Urban in an earlier film. Waking up, he finds that the planet's menagerie of extremely dangerous animal life is dead set on eating his porky carcass, so he uses his various ridiculous skills to regain his animal edge and live as long as possible. Along the way he tames a coyote rodent puppy and gradually develops an immunity to the venom of the local reptile scorpion dinosaurs.

Despite all of these goofy contrivances and Diesel's lack of screen presence, there's something almost entertaining about this whole section of the film. Riddick's survival skills are the kind of ludicrous back-pocket superpowers that a comic-book author who has written himself into a corner might pull out at a moment's notice. Of course Superman has always been able to turn back time by flying around the world really fast. Of course Richard Riddick can stop his heart and hold his breath indefinitely to evade capture from bat-eared coyotes.


After a while, though, this relentless barrage of "look at how awesome we think this character is" moments just becomes numbing. A whole film of Vin Diesel trying to survive in increasingly unforgiving situations could have worked if it had given these scenes any room to breath. Unfortunately, what we have here is just a marginally promising first act followed by what I can only describe as a terrible B-movie sci-fi remake of Platoon. Ultimately, Riddick is an ordeal.

The ill-fated next section of the plot begins as some improbably Hispanic mercenaries arrive with their evil, Spanish-sounding names and exotic, secretive accents, led by amoral rapist and murderer Santana (Jordi Mollà). Santana is intent on decapitating Rick Riddick and putting his head in a box. A lot of screen time is spent establishing Santana's head box. He's going to put a head in that box. He has a special box to put a head in. It's Riddick's version of a running gag.

Santana's rag-tag south-of-the-border bad guys soon find that they are too incompetent to kill Riddick, and so the much-better-equipped and just-diverse-enough-to-not-appear-racist group of mercenaries led by the whitest man in the galaxy (former Rugby League star Matt Nable) takes over the show with the intention of capturing and interrogating Dickie Riddick. 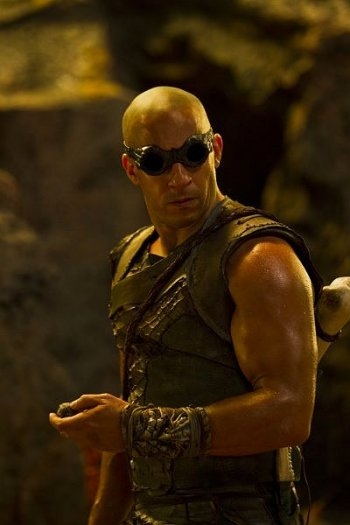 He's so shiny and orange.You'll notice from the language I am using here that Riddick has a very specific anti-Hispanic racist bent. Why, you ask? I have no idea. Your confused granddad (a.k.a. David Twophy) wrote and directed this film, I guess. He's not a racist, you see, but he does think all those Mexicans should go back to where they came from and stop doing whatever it is he thinks Mexican immigrants do that he doesn't like. Putting people's heads in boxes is most certainly one of those things, as is raping white women and committing murders just for shits and giggles. Even the Hispanic characters who aren't logically evil turn into antagonistic presences later just because they are one of those ... you know ... one of those.

In the third act, Pitch Black happens all over again. We get about twenty minutes of the reptile scorpion dinosaurs (remember those from earlier?) attacking the ill-assembled cast of characters and wiping out most of them. This is not a climax that the film has earned in any way. The film is called Riddick, for crying out loud. We get a little bit of the title character trying to survive, followed by an inordinate amount of running time dedicated to poor character dynamics while he languors off screen, and then a short stint of him failing to do anything worthwhile as monsters attack everyone. Riddick offers only the loosest illusion of structure by acknowledging that it even needs a third act, but come on, you need some kind of logical progression. You can't just bring back some antagonistic creature from the beginning of the film (eons ago, tonally) and say "oh no, now there are thousands of them!"

When Riddick finally returns, he suddenly becomes the great redeemer. But don't get too excited, you only get redeemed if you fit the criteria. Quick check: Are you white? If you answered yes, then you get redeemed, no matter what your sins are. Maybe you're a thoroughly unlikable militaristic jerk that nobody cares about, or maybe you're naive and wet behind the ears, or maybe you're one of those homosexuals. Doesn't matter; if you're white, you're allowed to survive until the end of the film with the stamp of Riddick approval.

Wait, did I say homosexuals? Why, yes I did. You want to know this film's attitude toward homosexuality? Surely you can guess. We've already established that this film was written by your confused granddad. At first I thought that the character of Dahl (Battlestar Galactica's Katee Sackhoff) was bordering on progressive. Here was a strong woman who held her own in a group of hyper-masculine men, holding off would-be rapists without breaking a sweat ... and she's openly gay! Great! Except no... because as all confused granddads know, lesbians are just women who need a good fuck from the right man.


Of course Ric Riddick is that man, because there's nothing more arousing to a lesbian who's constantly surrounded by displays of masculine posturing than a display of masculine posturing. We know this theory is true because clearly this kind of thing happens to straight men all the time. Actually, having Santana decide he was suddenly gay for Riddick would have been a much better twist.


MINORITY REPORT: Have you considered that maybe, just maybe, this wasn't the work of a confused granddad, but rather the influence of Banky, Jason Lee's character from Chasing Amy? Yes, I am aware that actually kind of makes it worse. - Martin R. "Vargo" Schneider