Avatar: They just don't make 'em like they used to!

EXPECTATIONS: The Internet is ablaze with talk of 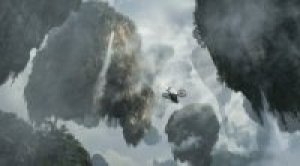 If you're wondering what's keeping these rocks in the air then you probably won't enjoy this movie.James Cameron's latest "triumph." Any negative comment is shot down on sight. Personally, I think it looks like a sub-par Saturday morning cartoon that is too confusing for kids and too mindless for adults. Quite honestly, it looks like a cross between Dino-Riders and World of Warcraft. I have little enthusiasm for either, so let's see how this turns out.

REALITY: Avatar is this year's Cloverfield; visually innovative, but offering nothing new on the storytelling front. Everybody is talking about how Cameron has revolutionised visual effects and 3D technology, and having finally seen it, I can only agree. The integration of the CGI and live action is very impressive, and this is by far the best example of a 3D film I've seen to date. But, this isn't a video game. You can't get away with taking huge steps forward in visual techniques and then tell a cliche-ridden story.

Allow me to take a stab at summing up the plot. An evil corporation is attempting to mine the planet of Pandora for a made-up element called Unobtainium, because James Cameron forgot to come up with a scientific sounding name for it. Their progress is hampered by the natives, a tribe of humanoids called the Na'vi, because fantasy names always have apostrophes where they're not needed. So that's where the Avatar program comes in; people can transfer themselves through the wonder of science into the body of a Na'vi that looks just like them for some reason. Sam Worthington is one of the scientists about to embark on this journey, until he is killed and replaced by his disabled brother Sam Worthington. Disabled Sam Worthington is actually a marine answering to a scenery-chewing Stephen Lang, who is by far the best thing about this film, feeding intel back to the evil corporation about the Na'vi.

In his new Avatar body, Disabled Sam Worthington meets and falls in love with Neytiri (Zoe Saldana), a prominent member of the Na'vi people. Did I mention that the Na'vi are giant, blue cat-faced elves? Because they are, and Worthington finds that very attractive apparently. He becomes ingrained into their culture and decides he's not all that keen on the idea of Lang coming and blowing them all up, so he and the rest of the whiny liberal science types (including Sigourney Weaver in the only truly likable role of the film) all ship out to the inexplicably floating mountains and decide to make a stand.

The fact that the story is predictable right until the end didn't stop Cameron from making Avatar very, very long. I was bored long before the climactic battle scenes, and even then I didn't care enough about the characters for it to be worth it. You know your film is in trouble when the two most irritating elements are your lead actors. Worthington's accent slips all over the place, and as for Saldana, I'm not sure exactly how much of her we're seeing in the character, but something about the way she moves and speaks is rather askew. What I found most off-putting was a bizarre scene starring the two CGI creatures that reminded me of the creepy virtual-reality sex from The Lawnmower Man. I was hoping they'd get interrupted just so someone could make a joke about blue balls, but no such luck.

The films does have its moments though, most of them courtesy of supreme bad-ass Stephen Lang. Here he completes his hat-trick of superbly entertaining performances for the year, having previously stolen the show in Public Enemies and The Men Who Stare at Goats. The scene in which he boards a huge robotic fighting machine that wields an enormous knife is so cool that it doesn't even need to make sense. 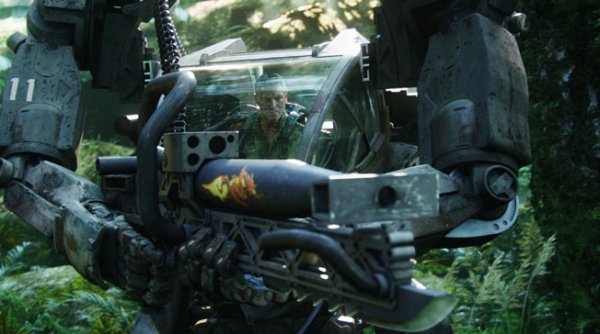 This is the best part. Now you don't need to see it.

Add to that some truly stunning images involving glowing plants and massive waterfalls rolling from floating mountains, throw in some huge helicopters and explosions, and you have a visual feast that is well worth seeing in 3D, even if none of it could ever logically exist. If you can ignore the lack of common sense applied, your jaw will be on the sticky floor of the cinema for most of this film's 96-hour running time.

MINORITY REPORT: This guy doesn't know what he's talking about. Who cares about stories when they go to the movies? I feel more comfortable when people tell the same stories over and over. Just so long they explode some shit real good, I'm happy. And you better believe shit explodes real good in Avatar. -David "Data Core Devil" del Vacoté III