One of the only people to contact me, Jonathan Murphy wrote, "More about marky mark please" and with a request like that, how could I not write this? Also, if YOU have a request, put your aspergers aside and email me. I promise I won't make it any more awkward than any other type of social event you have been a part of. 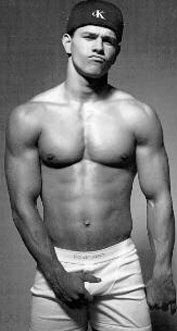 "REGRET" and "MARKY M" have the same amount of letters. COINCIDENCE???If nothing else, I pride myself on the honesty I exuberate to my audience. With that said, I didn't fully grasp the aura of Marky Mark until I did some research (Wikipedia) for this DAILY DIRT article. As I am only 21 years old, I did not get the full exposure to Marko McMarkheim and while he dedicated books to his cock, I had just entered Kindergarten. I never watched much TV as a kid so the first time I had ever experienced The Mark was when I first saw him in movies. I think of myself lucky in this way since I absolutely hate nearly all rap (though I have no problems with Good Vibrations) and lets face it, he looked like a douche.

In my previous article, I mentioned that I had no problem whatsoever with Mark Wahlberg and I still don't. However, had I been born a few years sooner I probably would have the same sentiment most people do: he's Marky Mark. I like him as an actor and as long as he keeps dogs from trying to strip him naked, I will continue to like him as an actor. However, this is a humor website so liking him has no relevance. Sorry Marcho Mamamarkino who doesn't read Something Awful and will never know this article exists!

If I could ask the Markster one question and one question only I suppose it would have to be, "Do you regret having been Marky Mark? You know, like how Paulie Shore regrets being Paulie Shore?" After doing a couple of successful movies and getting to play the lead role in the next video game movie of the year involving Max Payne, does his past haunt him? Sure, we all grab our crotches from time to time but not all of us are reminded of it when someone does a Google image search with our names.

This guy makes Marky Mark look like Morgan Freeman.All I can say is that at least the Markinko isn't Eminem. Now THAT guy is a complete jackass. Every time someone approaches me and says, "Hey Steve 'Khad' Grant, the best writer on Something Awful dot com, a celebrity died today!" I am hit with disappointment to find out it wasn't Eminem. I am pretty happy that the guy has seemingly disappeared into obscurity though, so not all is bad.

Does Markana Markresshia still sing? Does he still grab his dick in public and make a pouty face? I don't know. I just hope he doesn't.

In other news, look at this fool: