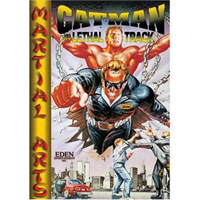 Overview: A radioactive cat turns an anonymous douche into a martial-arts dynamo! Concurrently, some really boring abductions and shootouts take place in Thailand.
Directed By: Godfrey "Alton Cheung" Ho, 1990
The Case For: Catman marks the zenith of the everyman-as-superhero conceit. No great responsibility comes with his great power: He simply inherits all abilities and accessories.
The Case Against: Catman disappears for long stretches while viewers trudge through dreck about military coups.

In his late-'80s/early-'90s prime, Hong Kong director Godfrey Ho made multiple movies simultaneously, spliced the scenes together in puzzling order, and added dubbed dialogue. With Catman in Lethal Track, this cinematic Dr. Moreau combines a radioactive cat with a steaming dungpile. Because of butchery such as this, Ho used aliases. (For this project, he selected "Alton Cheung." Catman, who fills the "person bitten/scratched by radioactive (blank), resulting in the ability to (blank)" mad libs template with flair, deserved to be alone on the marquee. 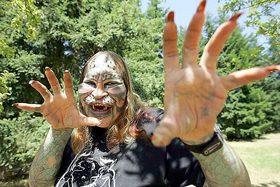 This guy paid hundreds of thousands of dollars to look like this. The radioactive-cat route is more cost-efficient.When we first encounter the Man Who Would Be Catman, he's just Sam, an average guy walking with a bat slung over his shoulder like a hobo pole. His pal Gus reveals he's becoming a CIA agent, but any in-depth discussion regarding the pros and cons of covert agencies as prospective workplaces must wait, because Sam spots two junkies ransacking a "biohazard"-emblazoned government vehicle. Sam and Gus pummel these denim-clad gang members, but not before the radioactive cat inside the van gives Sam an irritated swipe.

Before we can learn the symptoms of radioactive cat-scratch fever (reportedly, the traditional strain, while often dismissed as "nothin' dangerous," can make grown men cry and go insane), we meet Catman's future nemesis. It's Father Cheever, a priest with a ludicrous world-domination scheme that involves building a utopia in Asia. With his wild eyes, ponytail and molester sneer, he ranks somewhere between Poltergeist II's Reverend Kane and Prom Night IV's Father Jonas in the psycho-clergy canon.

I must now begrudgingly address the idiotic military-versus-bandits caper that interrupts Catman's heroic, inspiring saga at regular intervals. No one needs updates on Catman's retarded Siamese twin, joined at the mismatched film stock, so I'll just fast-forward to the resolution. The bad guy, who sports an eye patch, dies anticlimactically. He doesn't even get his good eye blinded, which would provide the perfect set-up for ocular puns. (Fortunately, Ho would later find the perfect vehicle to correct this oversight.) 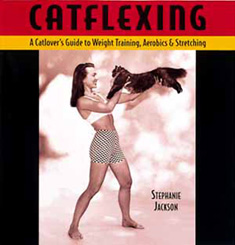 Aerobics + cats = the perfect gift for Sam. Take note, Gus!So, back to Catman, who appears to be in heat. As disembodied torsos writhe on his flickering television screen, he undulates under the covers, releases a self-satisfied grunt, then sits up, drenched in sweat. "What's wrong with me?" he queries the heavens, perhaps wracked with guilt at his masturbatory perversions. He flicks off his set, but when he gets back in bed, it resumes its glazed-funk siren song.

Seeking to occupy his idle hands, he starts barking commands at bedroom objects: "Light on! Light off! Television on!" When the electronic devices respond, Catman chants "on, off, on, off" in a rhythmic motion while watching an aerobics instructor contort into compromising positions. (An "in, out, in, out" refrain would only make this scene slightly more suggestive.) For historical perspective regarding his incredulity at intermediate-distance channel-changing, haven't wireless remotes been around for, like, 50 years?