Stevie, We the Instructors still speak among ourselves regarding your Superior Grade analysis of "Spider-Man Zaps Mr. Zodiac." Verily, you understand the True Lessons of Reading Time. I won't be at all surprised if you're at the head of the line when we take you all Outside! Speak, and make us proud again.

Thank you, Instructor. I am so pleased at your niceness. I have much to tell you about book task "Aquaman, Scourge of the Sea." It has taught me truths that will help me not only Outside but also under the waters. 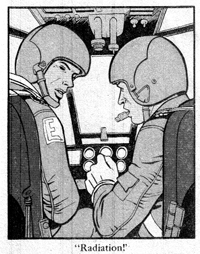 Radiation is what turns normal men into super-men. There would not be a Spider-Man or an Aquaman without these radiation delivery men, who spy on people from their plane to see if they would be good at punching bad animals and wearing masks. If they are Excellent Grade, then the delivery men give them radiation by "accident," so they won't know they were chosen. This delivery man has all-black eyes, because of being around the radiation. If you're not a hero, radiation sometimes makes you get sick and die, but you probably have powers for a while first. 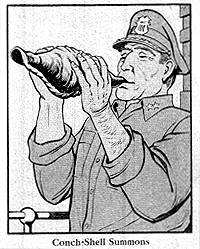 This is a boat policeman. He is making a kiss with a shell creature, because he's in the middle of the sea, and no one is around but water animals. This is natural. The "Conch-Shell Summons" likes the way it is being held. It will not tell Aquaman "avenge my honor." 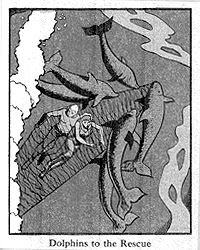 Dolphins are sworn to serve man. They can rescue you from a net, but they can't save themselves from a net with tunas because of the dolphin directives. I learned from Spider-Man that you shouldn't waste time having love way with animals, but I think that if I could choose an animal to love, it would be a dolphin. The babies would be smart. 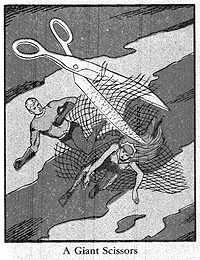 The Giant Scissors is like The Giant Flying Scales. It judges superheroes, and executes them as necessary. Aquaman hasn't done anything bad yet, so it is saving him and his Mermaid. The Giant Scissors have no feelings. They could be the saver or the killer. The dolphins failed. They are not ready to become heroes. 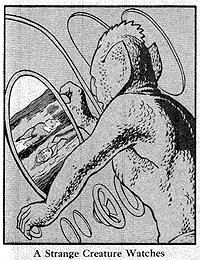 Strange Creatures are always watching people. They can take advantage of you if they see you're relaxed and distracted, like Aquaman and Mermaid, floating without cares.