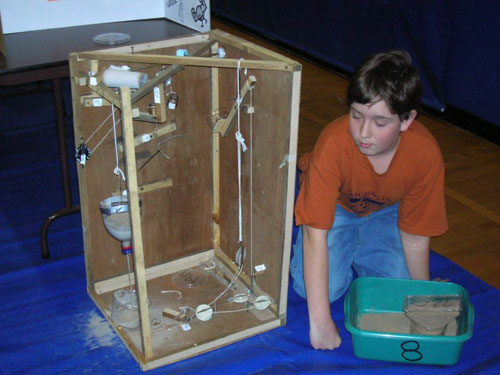 Dr. Thorpe:Hahaha, look at this little moron, he can't get his awesome machine that flings cat shit into his mouth to work.

Zack:That's what this does? I thought he had developed the least efficient way to make oatmeal.

Dr. Thorpe:Maybe it does both. But the point is, the little retard can't make it work. He's flipping out right there. "No! Work, damn you! This was supposed to be my moment of triumph! I was supposed to be standing on that podium, blue ribbon in hand, mouth full of cat shit and half-cooked oatmeal!"

Zack:"Notes on catshit/oatmeal machine: Batch #8 of the blend did not work as planned. My mouth remains unfilled with hot cat blast and my oatmeal is still efficient and perfectly blended."

Dr. Thorpe:And is that an asthma inahler up on the top? You can't have constricted bronchial tubes when you're trying to whip oaty cat shit into your mouth at 50 miles per hour. It's a safety hazard that this little Rube Goldberg is not willing to accept.

Zack:I don't think he really looks like he's flipping out about the malfunction though, he looks like Ben Stein on barbiturates. I think he probably does everything really slowly and meticulously and then when it doesn't work he lets out one of those hopeless Eeyor sighs.

Dr. Thorpe:Oh, on the inside, he's flipping out. His perverted little mind is going a mile a minute. He's just really deliberate, as all crazy half-autistic deviants are.

Zack:Like how if you get them riled up they'll just keep hitting you over and over even if you're already dead. That superhuman focus to see things through no matter how impossible or terrible the consequences.

Dr. Thorpe:Yeah. He'd have that exact same look on his face if he was stabbing a rabbit to death with a screwdriver.

Zack:They get that same 1000 mile stare when they're eating. Just breathing really heavy and sweating as they shovel mashed potatoes into their mouths or cram whole pizzas down their gullet.

Dr. Thorpe:Yeah, he doesn't move a muscle for an hour and a half when he's just sitting there with his mouth gaping open, waiting for the egg to knock down the dominoes and spring the trebuchet that flings the litter-pocked cat shit into his maw.

Zack:He probably has an egg timer that goes off so he knows it didn't work. Because otherwise, no matter what visual evidence he has, he'll just assume it's still going to work.

Dr. Thorpe:You can kind of tell the teacher didn't bother grading him or looking at his project or anything. She just put a tarp down and stuck him in some dark corner where he could do whatever it is the fuck he does away from all the normal kids with their baking soda volcanoes and Skittles statistics.

Zack:Yeah, they're all competing in the realm of A through F letter grades, he's still in the "S" and "U" area, where he has to bite someone to not pass a class. And believe me, he's failed several classes.

Dr. Thorpe:Remember how there would be a couple of near-retards in the normal kids class that were kind of "on the edge" and they had to integrate them but they were always either crying and shaking or sitting there looking way too happy?

Dr. Thorpe:But the worst ones were the ones who neither cried nor looked too happy, they were just kind of lumps of nothing who would sit there with no expression all day long, until one day out of the blue they would show up to the science fair with this fucking god-knows-what they built and everyone is like "whoa." And even after you figured out it was for flinging cat shit, you were still kind of impressed, because you didn't even think the kid knew how to use a pencil.

Zack:Yeah, I think those kids are autistic as opposed to just regular retarded, and not to be confused with Asperger's, which is made up by losers on the Internet to explain why they are huge losers.

Dr. Thorpe:Don't make fun of Aspergers. If it weren't for Aspergers, we wouldn't have 20-page Wikipedia articles about Knuckles the Echidna.

Zack:There was this girl I went to high school with who was really strange. She was really beautiful, like that kind of dark-eyed and mysterious, but also sad beauty that Dan Clowes always uses to illustrate his female protagonists. She dressed really weird, like charity clothes and homemade sweaters. She never talked and if you got close to her she had this weird smell, like cortisone cream and baby powder.

Zack:I'm pretty sure one day she will just walk out of a room and have some website with hundreds of hours of video like meatinmyface.com or something, where she eats sausages naked. And that website will change the world.

Dr. Thorpe:The one that got away, my friend.

Zack:Actually she probably lives in a trailer the government paid for spitting out kids with some guy who spends more time in jail than at work.

Dr. Thorpe:Yeah, it's really weird when people who look attractive in kind of a sophisticated hipster way are actually just malnourished, autistic hicks.

Zack:I blame meth, it blurs the line between the two.

Dr. Thorpe:You're thinking "that girl has a really cool haircut," but actually it's just because her dad beat her up with an oscillating fan while it was still turned on.

Zack:"What a bold shirt with red paint splashed on it like that!" Nope, turns out she caught a squirrel with her hands and squeezed it to death against her chest.

Dr. Thorpe:"I wonder where she got that awesome retro skirt, that thing is so authentic!" Actually, it's a hand me down from her "sister," who's secretly her mom.