Tuesday, Jul 31, 2012 by Jon "@fart" Hendren (@fart)
Our very good friend and writer here at SA, the unparalleled David Thorpe, recently participated in a marketing stunt curated by the monolithic Walmart and some kind of "quick energy boost" product that somehow was designed to involve recording artist Pitbull. According to the stunt, Pitbull would go wherever fans wanted him most, and this burning desire would be measured by the number of Facebook "likes" each local Walmart store would receive during the promotion, with the store receiving the most "likes" getting a visit from Pit himself. David's way of taking part was a bit different than the marketing heads intended, however-- he instigated a campaign to exile Pitbull to the frozen wastes of Kodiak Island, Alaska with help from about 70,000 friends who were very eager to help "like" the most remote department store they could find.

You might assume that there would be a lot of annoyed people in suits, and there probably were plenty of those behind closed doors somewhere. Pitbull himself, however, showed up to Alaska this week eager to meet his fans, and he brought David with him. Despite the absolute mind-shattering absurdity of the situation I've just described, all of this really did happen, and here are the tweets to prove it. 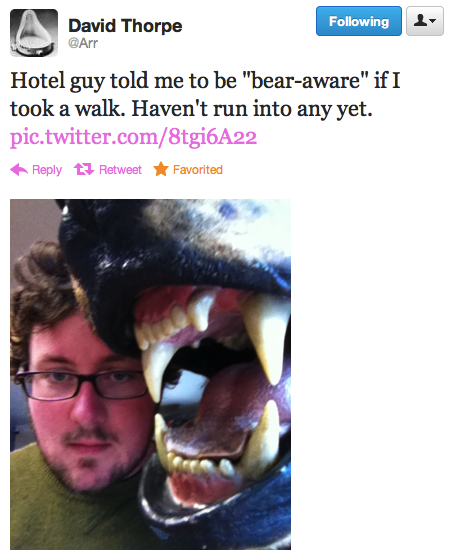 Everything worth reading from Twitter in one handy, horrible place!