Thursday, Dec 01, 2005 by Zack "Geist Editor" Parsons (@sexyfacts4u)
In the 1990s it was Geo-Cities and a series of reject successors. This decade's Internet trash bin has become Myspace and we're happy to sift the debris for our eminently fashionable readers.

Dr. Thorpe:Myspace, like Something Awful, is home to many interesting characters who run the gamut from "fat" to "very poorly dressed." In this week's Fashion SWAT, we've combed through the millions of Myspace members to find some of the most interesting specimens of humanity: naked guys, egotistical transvestite rappers, peeing hipsters, Rubenesque women, and a guy with a stupid beard.

Zack:We decided not to link to the Myspace sites because they would probably be vandalized by you dorks and choke under the strain. If you really want to find them you probably can. We are very excited about this article and especially excited about bringing Chuck to America.

Dr. Thorpe:We must warn you that some of the images you see may alarm and disturb you. While some images feature harmless, friendly, red-haired dreamers, others may permanently sour your perceptions of humanity and the internet. We love our jobs. 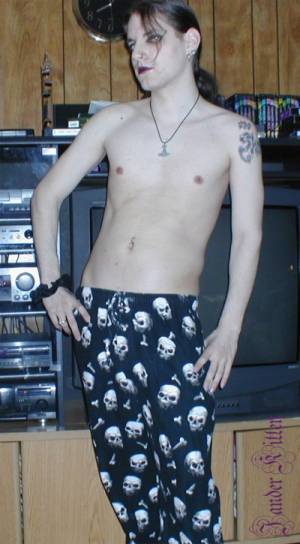 Zack: What is this guy's name? Jander Kitten?

Dr. Thorpe: Nothing is more gothic than hanging out in your wood-paneled rec room in your skull pajamas.

Zack: Maybe he just got off his shift at the flour dust factory and he's getting ready for bed. Right after he watches one of his Babylon 5 DVDs.

Dr. Thorpe: I always wear my ruffly wrist thingy to bed too, because it's a great place to wipe my nose.

Zack: The sad thing about this picture is that he's probably the cool one. Among his friends he is the guy they all look up to. The fat girl constantly hangs on him at parties and the guy with acne always quotes Family Guy to him.

Dr. Thorpe: Yeah, guys like that are a great phenomenon. They're about six rungs down the social ladder from anything approaching even mild coolness, but they're the only one in their group of friends who's ever touched a girl, so everyone treats them like Don Juan and they develop huge egos and think they're the wickedest cats in the universe.

Zack: And they have all these wild stories about doing wild and crazy cool guy things like the time they scored some ecstasy and totally just felt curtains for an hour. And their friends will just be riveted to the tale, but during the party everyone just laughed about the crazy dude feeling the curtains and then when he passed out they wrote I HUNGER FOR DONG on his face. Not to mention when it turns out he's gay the fat girl is going to be absolutely crushed. She'll have nothing left to turn to but black guys with low standards.

Dr. Thorpe: There's nothing like watching an idiot like this out in public. He'll talk really loud and constantly look around to see if anyone else at the diner is laughing at his outrageously edgy dead baby jokes. And of course, everyone but his little circle of friends is just bulging their veins from concentrating on willing him to die. But inside his mind, "my loser friends think I'm the greatest" somehow transforms into "everyone thinks I'm the greatest!"

Zack: What quote should we pick from this guy's site to represent him? We need to do that from the beginning in case there's something really juicy to mock.

Dr. Thorpe: How about:

Zack: Oh Christ, his name really is Jander Kitten. The font was so bad I thought I was making a joke.

Dr. Thorpe: Oh, seriously? God, maybe we need to go for a whole new angle on this guy.

Zack: I think this quote better describes this guy:

Though, most of my of my friends are female, I tend to not get along with most guys, I suppose its because Im too femme for them, or I just don't have anything in common with them. I guess I am what you would call a "emotionally transgendered" person.

Zack: "Emotionally transgendered" is pretty much the definition I think of when I derisively call someone a faggot. You can throw dicks up asses all you want, you can be Carson from Queer Eye in a faded pink Morrissey shirt, but you're just gay. This guy is a fucking faggot.

Dr. Thorpe: Come on, it might not be his fault. Some people are just born this guy and just have to sail where the wind takes them, even if it's into gothic pagan kitten-fairy pajamaland.

Zack: I like the Dimebag Darrel memorial ribbon on his site. Dimebag Darrel would be so happy to know that the emotionally transgendered DJ Jander Kitten feels bad that he died. I hope that you're reading this IM in heaven and these fake emoticons touch your halo, metal angel! :mrowr:

Dr. Thorpe: It must have been a tough little think-session when he came up with the "emotionally transgendered" line. He must have realized, "hey, wait a minute, most guys don't like me because I'm basically just a huge pussy. How can I spin this so if they hate me, they're bigots?"

Zack: There needs to be something like a hate crime law for this guy, but in reverse. Like if you kill him because you hate his ilk then, well, the law understands. Maybe you even get a reward. Like a free microwave or a certificate or something. "The bearer of this certificate totally wasted one (1) righteously lame shithead!"

Dr. Thorpe: My car has a line of spraypainted stencils of ankhs with X's through them.

Zack: I paint rings around the barrel of my harpoon launcher I bought at a police auction.

Dr. Thorpe: We should point out that this guy is straight, just so we're not accused of being gaybashers. We're cutesy-goth pajama-nancy Wicca "musician"-bashers.