"LSD: Dream Emulator" is an obscure Playstation game released only in Japan. It was recommended to me by Lowtax, who is always recommending that I play horrible games. I think it's some psychopathic mind game he's playing, like the one John Doe plays with the detectives in Seven. I lose a lot of sleep wondering what he'll ask me to play next. Will it be an RPG about colon cancer? A Japanese fighting game that causes epilepsy? Doom 3? After I finish this review, I'm uninstalling all my instant messaging and email programs, and changing the locks on my door. I've had enough. 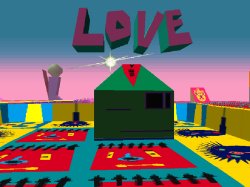 Never trust a game where this is one of the first things you see.

Anyway, just as the name implies, this game is supposed to simulate the experience of dreaming. Obviously, Japan needed a new subcategory for the overcrowded "sim" genre after their successes in sim pets and sim dating. But wait, there's more! According to Wikipedia, LSD is also based on an actual dream journal an employee at Asmik Entertainment (its developer, and makers of some of the 90s greatest console games, including Super Hydlide) kept for ten years. Fantastic! I can see that unlike the developers of all those fake-ass dream sims, Asmik Entertainment takes dreaming pretty seriously - although personally I think a better promotion angle would be that this game is made by the developers of Super Hydlide, who you get to murder in the final level.

LSD does simulate one aspect of dreams (or at least my dreams) quite well. Namely, the fact that they're unfun and confusing. You begin the game in an apartment, which you'll explore for a few seconds before the sluggish controls make you walk into a wall. Then the screen will flash white and you'll find yourself in a completely different area. It might be a Japanese village, a futuristic city, a psychotic toyland, or everyone's favorite video game locale, a fog maze. Walk into a wall again and the same thing will happen. It's called "linking" and is definitely an innovative feature, in that it recreates the experience of abusing Ambien and waking up in an unknown place with no idea of how you got there, something I'm sure Asmik's programmers do on a regular basis.

As you explore LSD's fantastic dreamscape, you'll periodically encounter NPCs like shriveled heads, elephants, sumo wrestlers, and a sailor. You might think they have something to do with the story or gameplay, but in reality they're just there to spruce up the landscape, since their shitty modeling makes it look lush and detailed by comparison. They do nothing but drift across the levels until they randomly disappear; the only way to "interact" with them is by touching them, which triggers the teleporting effect with the added bonus of fucking up the textures and changing the color of the fog.

"So what is LSD's gameplay?" you might be asking. Good question. The best definition I can come up with is "walk around aimlessly pretending that every 100 footsteps saves a starving child or lowers the national deficit." That's pretty much all you do in the game - walk around, stumble into walls, and bounce between the various zones like a psychotic ping-pong ball. After 10 minutes of this, the game kicks you back to the menu screen and the "days" counter goes up by one. And that's it. That's as far into the concept of "gameplay" as Asmik's programmers got before running away screaming.

Speaking of screaming, LSD's engine made me want to on a regular basis. It seems to be missing a vital line of code that allows it to render more than three polygons before chugging like a pledge at a Delta Phi kegger. I imagine the engine being like the engine room of the Starship Enterprise during a space battle: the game code requests a new polygon or texture and Scotty goes "Fuck off, Kirk! I've got a wall to render, then a fog effect dammit!" I'm actually semi-convinced that this engine is an elaborate joke; maybe Asmik had a feud with the makers of the Sega 32X and programmed it as a cheap shot at the 32X's graphic abilities. Then they forgot about it until a week before this game was due and there was a conversation like this:

Programmer 1: We don't have time to program a new engine! Where's that joke engine that can only render 12 polygons before crashing?

Programmer 2: The one that stretches textures like they're made of silly putty?

Programmer 1: YES! The one that's like bad dream where you're half awake and everything is blurry mosaic of half-formed images! 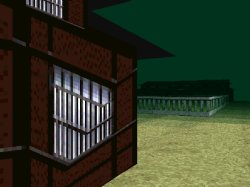 The trippiest effects come in the form of graphical glitches.

In the audio department, LSD's music sounds like it was composed for robots or Lovecraft monsters who use scales beyond our comprehension. According to Wikipedia, the tracks in the game are called "patterns, not tunes," which is a pretty accurate description: anyone claiming to find an actual tune in them is grasping at straws. The sound effects aren't much better. They consist mainly of your character's footsteps, which sound like they were optimized for a ColecoVision sound card. But on the plus side, they at least partially drown out the music. And the weeping of your inner child, who realizes, since you're playing this game alone on a Friday night, that you've wasted your life.

Are there any redeeming features to LSD? If you forced me to name two at gunpoint, I guess I'd say it has an original premise, and that maybe if it didn't have so many glaring faults in the graphics, gameplay, and Everything Else departments, it might almost be interesting. Not enough to make me like it, mind you, but enough that I wouldn't out-and-out hate it. At least not in crass ways like calling its developers assholes, or saying that its "cult following" probably consists of crusty stoners whose favorite movies, in order, are Waking Life, The Matrix, and What Dreams May Come. As it stands, LSD has probably the lowest fun-retention rate of any game I've played, going from psychotic the first few times to mind-numbingly boring after that. There's no objective, so theoretically it goes on forever until you do a cost-benefit analysis of all the time you've wasted. That's sort of the end boss, except you defeat it by crying and then alcohol. Just say "no" to LSD.