Friday, May 02, 2008 by Jack Thompson (@TwitterHasBannedAllMyAccountsEver) 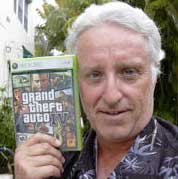 I, Jack Thompson, present to you the first HONEST review.Murder. Assault. Profanity. Defenestration. Such previously inconceivable crimes are suddenly appearing our nation's electronic television sets, courtesy of the new Grand Theft Auto IV violent video game. As a concerned American citizen and servant of our Lord Jesus Christ, it is my duty to inform and warn parents of this depraved attack on culture.

My history and grievances with the Grand Theft Auto violent video game franchise are well documented; my countless victories against Rockstar Games conclusively prove good shall always triumph over evil. Some of my more "famous" conquests, all of which attracted remarkable media coverage, include:

October 2001 - Placed a phone call to a local Miami radio talk show, hoping to get on the air and publicly expose a direct link between the recent Anthrax attacks and the Grand Theft Auto violent video games. Hosts were too afraid to take my call on air, but I did manage to scream out a couple Bible verses to the call screener before he hung up.

March 2002 - Sent several (hundred) angry faxes to the attorney general after my wife burned a birthday cake in the oven. Approximately two hours later, the attorney general phoned me, pretending to be an employee of a pizza restaurant. He claimed I had an incorrect fax number; this is attorney general secret code for "our investigation of Rockstar Games shall begin now, god bless Jesus."

June 2004 - Recorded the sound of my dog farting for several hours. I utilized advanced computer technology to conclusively prove similar audible frequencies exist in the Grand Theft Auto violent video game franchise. I stored this evidence on a Zip drive and mailed them to several major news outlets in an envelope labeled "IMPORTANT INFORMATION NECESSARY TO SAVE YOUR SOUL, OPEN BEFORE RAPTURE!!! PS: I'M NOT CRAZY."

January 2006 - Prepared lawsuit against Rockstar Games after discovering their Grand Theft Auto: San Andreas violent video game contained a malicious "miniature game." This "miniature game" let users dress their character in different clothing, which could easily encourage children to put on so many shirts that they suffocate and die. Lawsuit was rejected; I filed an appeal explaining that, since I wrote my letter on a legal pad, it must be treated as a law. I consider this event to be a victory because I found a $10 bill in the bushes near my mailbox. 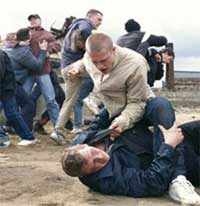 The Grand Theft Auto IV violent video game is an "open world" game, which simply means characters across the world will open their legs to you for a price (ultimately, your soul). Like many current games, your character is controlled in virtual reality, making it nearly impossible to differentiate between the game and real life. While playing this game, I repeatedly grew confused and believed my television had somehow transformed into a window overlooking Liberty City. "Do not run over that policeman!" I would shout at the main character. I tried throwing him a Bible, which simply hit the screen and fell to the floor. My wife was forced to eventually tie my Bible to some string, which she then looped around my wrist. Now my Bible falls into my mashed potatoes when I attempt to eat dinner, another crime which I shall add to my impending lawsuit.

The Grand Theft Auto IV violent video game begins by introducing the repugnant character you will soon control, Niko Bellic, an illegal immigrant who I believe was a boat captain. This shady, morally bankrupt lowlife details his plans to construct a criminal empire in Liberty City by employing the help of his rich, powerful cousin.

At this point in the game, I grew so repulsed by its flagrant vulgarity that I had no choice but to power off the video game and seal it in a Tupperware container which I buried several feet beneath my garage. Although I technically have not played or viewed any the game past this point, I have talked to various people and conducted extensive internet research, so I can assure you the remainder of this review is completely truthful and accurate.

Niko docks at the port and meets his cousin Roman, an overweight oaf designed to encourage obesity in children. This man commands Niko to reject the lord Jesus Christ and instead worship the proverbial "golden calf" known as the U.S. Dollar. They drive to his shoddy apartment and the screen fades to black, insinuating the two engaged in explicit incestual sodomy between scenes. Developer Rockstar Games is more obsessed with sales figures than the looming threat of transforming America's youth into a nation of fat gays who only move when rolling over to hump their brother.