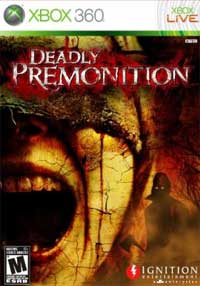 This game was originally called 'Rainy Woods.' Good move, marketing department!Although you may not have heard of the Xbox 360 game "Deadly Premonition," I can confidently proclaim, without a shadow of a doubt, that it is simply the most incredible game released for any platform in years. Before I explain what makes this game so amazing, I feel obligated to share a few minor facts about "Deadly Premonition":

For some ridiculous, unknown reason, a large group of so-called "professional game journalists" have decided that this list of inconsequential trivialities somehow makes "Deadly Premonition" a terrible game. IGN describes it as "awful in nearly every way" and dumps it with a 2 / 10 score. Cheat Code Central, the website located in the middle of Cheat Code City, states "Deadly Premonition is not a good game" and slaps a 2.5 / 10 score onto it. Gamespot, a spot composed entirely of games, despised it so much that they refused to review it, and instead offered their entire synopsis in the following sentence:

Perhaps these individuals were intoxicated by the unfathomable power inherent to the video game journalism industry. Maybe they instantly dismiss any game lacking a multiplayer feature that grants 12-year olds across the globe the chance to remind you, in vivid detail, why you are the biggest gay person in the history of big gay people. Their flawed, irrational opinions simply cannot conceal the irrefutable fact that "Deadly Premonition" ranks amongst the greatest pieces of art to ever grace the Xbox 360. 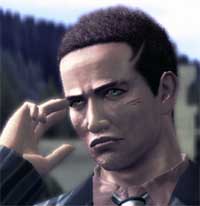 Our hero, Agent AAAAAHHHHHHH!!!!The game starts off simple enough: you step into the shoes of FBI Special Agent Francis York, an astute and intelligent man who chooses to only investigate homicides involving red plant seeds. Oh yeah, and he can also tell the future by looking into a cup of coffee. And he talks to invisible, possibly imaginary characters nobody else can see. And he eats raw potatoes, sleeps on a mattress in the middle of a cemetery, and stores giant fish inside his suit. Let me take this opportunity to point out I am not making any of this up.

Agent York has been sent to the northwestern town of Greenvale to investigate a murder in which the victim - a young girl named Anna - had been crucified on a tree with her stomach torn open. There was also some other little facet of the case I can't quite remember offhand... oh yeah, I recall it now: SHE HAD RED SEEDS ON HER. Like any responsible FBI Agent concerned with tree-related justice, Agent York approaches the small town around midnight, driving his muscle car through pouring rain while simultaneously talking on his cellphone, listening to music, looking at a laptop, and smoking a cigarette. Unfortunately, his clever plan to multitask every single action in the world goes awry, causing his car to crash into a ditch and leaving no choice but to enter the town on foot, because that would naturally be the most stupid and dangerous thing to do.