Ah, summertime, when sweltering temperatures magnify the vomit-tugging stench of the recording industry's rotting trash. July's putrescent releases ranged from the vapidly precocious to the stubbornly existent, but the month's most preposterous albums fit into this damnable category: "Emo-disco/rap from real/fake black kids." 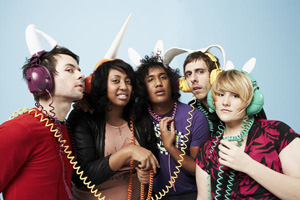 Really, this is the worst conceivable start to any album. It's possible that if the disc exploded as soon as I pushed play, and a pyramid-shaped plastic shard lodged itself forcefully in my ear canal, I could have experienced a comparable degree of aural trauma. However, that incident might have rendered me deaf, preventing me from hearing the subsequent reprise of this loathsome routine (SP: "Hello, this is your body." Brats: "What do you want, my body?"). I could have also avoided moronic lyrics such as:

Reggie Youngblood, the aforementioned simpering pansy, bears some labored vocal resemblance to British singers such as Morrissey and Robert Smith, despite the handicap of hailing from Pensacola, Florida. The females with whom Youngblood conducts his hideous back-and-forth blather defy age rather than nationality: They look like twentysomething scene-haunters, but sound like Kool-Aid-addled grade-school jump-rope chanters. Musically, the group mines the worst elements from multiple decades, combining disco's Velveeta funk and emo's precious 'cleverness' with glassy keyboards swiped from some lousy '80s-movie prom scene. If only those who cannot remember the past are doomed to repeat it, then why am I, as someone painfully cognizant of these atrocities, condemned to endure the Black Kids' patchwork fad fusion? 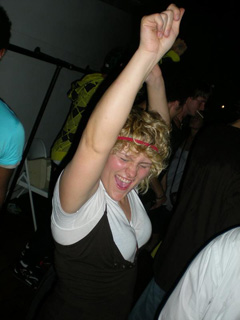 No, really, please *don't* teach me how to dance.Occasionally, the Black Kids take respite from reviving or perpetuating horrible trends, choosing instead to desecrate something decent. The single "I'm Not Gonna Teach Your Boyfriend How to Dance with You" kidnaps the melodic structure from "Bizarre Love Triangle," subjects it to an obnoxious "dance, dance, dance" cheer, then completely kills its appeal with Youngblood's whiny delivery. He whimpers every syllable as if he were pathetically pleading for his life. It's like he's singing with an angry mobster's gun in his mouth. Joy Division has been the primary target for hipster necrophiliacs, with Interpol/She Wants Revenge throat-raping Ian Curtis' corpse. Also, the Wombats, an outbreak strain of the Ebola-infested Arctic Monkeys, use the band's name to flog its worthless single. However, its posthumous incarnation New Order has suffered, too, with Orgy, Rihanna and these jokers vandalizing the grave of "Blue Monday," and now the Black Kids brandishing the hook from "Bizarre Love Triangle" as a sickle-like weapon to behead unsuspecting listeners.

In an unconscionably optimistic four-star review seemingly ghostwritten by Armond White, Spin gushes "Youngblood and pals throw a thrillingly subversive victory party to lift the country out of eight years of anguish." Yeah, because nothing heals the grieving families of dead soldiers and destitute victims of the depressive economy quite like hearing entitled Floridian hipsters make cute rhymes about their dating misadventures. Spin also touts disco as "the rare forum that privileges blacks, women and gays," implicitly smearing people who hate the genre's insipid "dance songs about dancing" formula as racist, misogynist homophobes. The magazine lauds the Kids as heroes for "kissing goodbye to the obsolete racial and gender roles." Perhaps they inadvertently accomplished this goal by proving an indie-pop group with African-American and female members can be just as unbearable as the usual collection of emaciated, pasty-faced dudes, but I can't call that progress.