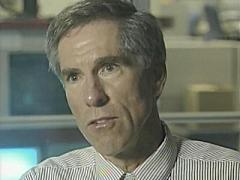 Clay Chastain, whose face is apparently composed out of 100% real clayClay Chastain: the name probably means very little to most of you reading this article. To the rest of you, it undoubtedly means even less. If you were to walk up to a dog and shout the name "Clay Chastain" over and over until you got bored or died, the dog would probably give you a really weird look and then he'd lay down or something. Outside of Kansas City, most people never encounter or have to deal with Clay Chastain, except for his psychiatrist and the supermarket pharmacist providing him with medication he evidently forgets to swallow.

As a Missouri resident for nearly 30 years, I've grown accustomed to encountering Clay's name in the local news, usually sandwiched in between words such as "fails," "frustrates," or "seen naked pacing in front of the Kansas City Zoo panda exhibit." For you non-residents lucky enough to live in areas not shadowed by Chastain's gigantic head, this guy emerges from his haunted cave every few months to propose new and exciting ideas that would undoubtedly revitalize Kansas City, assuming it was located in an alternate dimension where residents use taffy as currency. He's like a reverse Santa, unwelcomely appearing once a year with nonexistent trash nobody wants. "Oh look honey, Clay Chastain came by today... and he left us a garbage bag full of theoretical atoms and spiders!"

Once Chastain decides to butt into the public spotlight, it's only a matter of nanoseconds before something bizarre leaps from his mouth like a radioactive tree frog. He's spent the last half decade of his life trying to cram a light rail system into downtown Kansas City, which I'm sure he'd use frequently to get home, if only he didn't currently live in Virginia. Perhaps his next grand plan, revealed in 2009 to a crowd of excited and jubilant relatives, will involve a $1.2 billion project to combine Missouri with Virgina to form "Virgouri." We could hire civil engineers to make Troost travel directly into central Richmond. Dub it the "Murder Mile," and sell whimsical bumper stickers reading "I SHOT BULLETS AND HEROIN ON THE MURDER MILE." 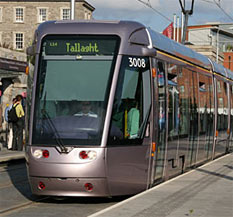 This is actually an example of light rail, not a very large cellphone on tracks.Before I continue, let me clarify a couple issues. I've got nothing against light rail. Out of all the different rails currently swarming throughout our great nation, I can confidently declare "light" as my favorite. If somebody forced me at gunpoint to date one of the rails, I'd easily choose light, and later that evening I'd make an honest woman out of her in the back of my Toyota. I would even go on the record to say I hate all rails failing to be light. This includes overweight rail, morbidly obese rail, and dark rail (not racist).

Unfortunately, a few critical issues exist regarding how light rail and Clay Chastain's incredible plan interact with Kansas City itself. In fact, there are at least three issues, possibly more, but I cannot fit them into my existing three-point article layout. Perhaps science will some day create a way to accomplish this. I'm sure Chastain has an idea to accomplish this, all he needs is $1.2 billion and any army of robotic clowns spewing silly string at 30-minute intervals.

This point isn't really up for debate, since the only people possibly unconvinced of this man's insanity are the folks who have successfully hid from him their entire lives. The most positive remark Chastain's supporters can muster up for the guy usually revolve around the claim, "well at least he stands up for what he believes in," followed by some rant about how evil city hall spends all day mindlessly whittling their teeth and cashing checks.

Give me a break. You know who else stands up for what he believes in? The homeless guy on Prospect holding a sign that reads "HONK MY TITS 4 FARTS." That man honestly and truly believes that if you honk his tits, you will receive farts. Should we praise and support this man for his energetic activism? No, we should have the police taser him into incapacitation, at which point we ship him off to have his brain studied in some medical lab. I'm not suggesting we do this with Chastain; the protective casing of his skull might be the only barrier preventing his thoughts from flying out everywhere and infecting innocent children.

Chastain sells his ideas to the public by spreading his patented "them versus us" conspiracy theory, claiming insidious entities such as "Big Business" and "City Hall" and "Everybody" are out to get him and squash his idea because it's simply the most fantastic thing in the history of the universe. He inexplicably managed to clown his way into some KMBZ talk show last week, where he droned on and on about the dark, evil, completely vague forces trying to destroy him. I believe it was the Shanin and Parks show, featuring the Saint Joseph-native host able to summon the city of Saint Joseph in his voice, instantly boring and depressing everybody within a 50-mile radius. The only thing more bleak than the city of Saint Joseph is the people who call in to the Shanin and Parks show voicing their random incoherent opinions based on half a conversation they overheard at the water cooler. "I think we should elect DOCTOR Ron Paul as President because he'll build walls around every single Mexican in the world! Also he hates gold and oil and most water fowl!"