Kansas City has emerged as a veritable hotbed of excitement lately, nearly eclipsing both Des Moines and Akron on the national list of cities with utterly shocking crap going on. For example, citizens have recently plunged into "Crazy" Clay Chastain's global conspiracy against light rail, in addition to the recent alarming TIF scandal which revealed - hold on to your hats here - taxpayer money is being wasted by the state government! Holy moly! I wonder how much it cost us taxpayers to uncover such a groundbreaking revelation. I'd willingly vote for a tax increase to find out.

The latest episode of the Kansas City Soap Opera has begun to pick up steam, probably because there weren't enough naked or gay people in the previous two chapters to maintain sufficient public interest. The NAACP and some Hispanic rights organization named "La Raza" are demanding Mayor Funkhouser fire and / or murder a parks board appointee named Frances Semler because she's a member of the Minutemen Civil Defense Corps. Whew! Ain't nothing more exciting than Kansas City parks and recreation drama! Let's introduce each group in this story, so we can all suffer on the same page. 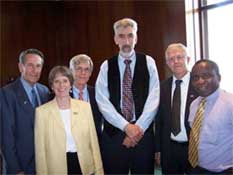 Vote for me. I am taller than these other people. That means I am better than them.Mayor Mark Funkhouser - Kansas City's current mayor, who used to be a city auditor but is now nearly ten feet tall. Some people got really mad at him because he was given a free car and this is apparently a "conflict of interest," perhaps because his grotesque height prevents him from fitting into cars without defying the laws of physics, which all high school chemistry teachers swear to uphold. Funkhouser travels to political events in a cattle trailer. Like all Kansas City mayors, he's a democrat and is weak against electric Pokemon attacks.

The Minutemen Civil Defense Corps - A small group of very bored people who pace around the Texas desert, searching for "suspicious" illegal immigrants. Some civil rights groups find such an activity very worrisome, as the process of "tattling on illegal immigrants" is merely one logical step away from "burning crosses and lynching black people behind the Wal-Mart." The Minutemen Civil Defense Corps is the only reliable organization defending our great nation and preventing those giant killer worms in "Tremors" from rising up and demanding national health care rights. 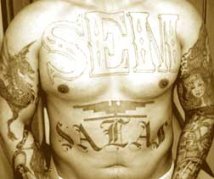 This image came up with I search for "La Raza," so Google is racist, not me.La Raza - A group self-described as "a private, non-profit, and non-partisan organization focused on reducing poverty and discrimination, and improving opportunities, for Hispanic Americans." Deciphered, this sentence means "a bunch of angry Hispanic people who make money by whining a lot about basically everything." Major corporations pay them money to essentially shut up and leave them alone. If you do not like their organization, then you're racist.

The NAACP - A group whose goal is "to ensure the political, educational, social, and economic equality of rights of all persons and to eliminate racial hatred and racial discrimination." Deciphered, this sentence means "a bunch of angry black people who make money by whining a lot about basically everything." Major corporations pay them money to essentially shut up as well, the amount of cash inversely proportional to the amount of racism displayed. If you do not like their organization, then you're racist too.

Tony's Kansas City - Some boring guy's blog about Kansas City which I'm including here so he'll get all pissy at me and use GIANT CAPITAL LETTERS to indicate JUST HOW MUCH HE DISAGREES with my STUPID AND INCREDIBLY WRONG OPINIONS. I'll save him the trouble by doing it myself right here: I AM PROBABLY A DUMB WHITE RACIST WHO OWNS EXPLODING MACHINE GUNS AND LOVES NASCAR AND VOTES REPUBLICAN AND HOARDS 9/11 BALD EAGLE COMMEMORATIVE PLATES DEPICTING JEFF GORDON FELLATING ANN COULTER. Maybe he'll smash his Darla Jaye speed-dial button and complain about evil white people in Lee's Summit for another hour, in between ads for magic wizard mortgage rates and meth house explosion news updates. It has always been my primary goal in life to be mentioned on a local AM talk show hosted by a creepy witch monster.

Now on to the drama!