It's all about surprises this week. First off, Dominic Cooper surprises everyone by actually cloning himself for the art of filmmaking (the clone is currently missing, presumed dead); then Ruben Fleischer decides one of the most horrific stories of criminal cruelty in recent history could be a hilarious comedy; and then - and this is the biggest surprise of all - a Final Destination film turns out to be decent; finally, an Oscar-baiting drama about racism in the South turns out to be quite dull. Okay, that one isn't surprising at all, but how about that Final Destination thing?

EXPECTATIONS: The story of Uday Hussein's body double Latif Yahia, his relationship with the man himself and his difficult political position would seem to make for interesting stuff as far as film fodder goes. If you can ignore the fact that all the characters speak English and the lead actor is white, then there's no reason to dislike this movie, surely?

REALITY: There's a lot to like here, and almost all of it is Dominic Cooper's performance (or should I say "performances"? Seriously, I'm asking.). The film itself is content with doing things by halves; dancing near enough to the edge that it appears to be dangerous, though it never actually takes any risks.

Latif Yahia (Dominic Cooper) is an Iraqi soldier, brought before Uday Hussein (also Cooper) with a proposition: Become his professional body double and leave his old life behind or... well, he's got no choice, really. In his new life, Latif is forced to witness some despicable things perpetrated by his doppelganger. He develops a relationship with Sarrab (Ludivine Sagnier), one of Uday's regular girls, and eventually reaches the point where he has to take drastic action because he just can't take it anymore. 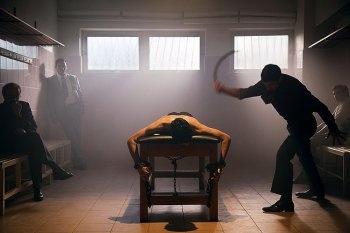 Don't beat yourself up. Heh... good joke.The whole thing is a lot like The Last King of Scotland, except that it never really goes into as much depth with the relationships or character motivations. I get the feeling that they wanted to make the film as short as possible to streamline the plot and keep the pace up. The problem with that is that everything just kind of happens when it needs to because history dictates. Surely the whole point in making films based on historical events is to try and express to an audience why you think these people did these things? At least on an emotional level.

The Devil's Double offers very little effort to do any of that. We are constantly told that Uday is fascinated in and loves Latif, but most of their interactions involve Latif watching Uday do something crazy and staring in disbelief or Uday forcing Latif to do something he doesn't approve of. There is no sense of any kind of intimacy between these two men, which is something that The Last King of Scotland did brilliantly.

Is it unfair of me to continue to compare this film to The Last King of Scotland? I don't think so. After all, the subject matter is very similar, and Kevin MacDonald's The Last King of Scotland is definitely the modern benchmark for this kind of film. The Devil's Double falls way short of this standard. Here we don't really get the feeling that there's much of an on-screen relationship developing between the two leads or, in fact, anyone else. In truth, every character who is not one of the two leads is a complete non-entity, including Sarrab, who is supposed to be a romantic figure but might as well not even be present. 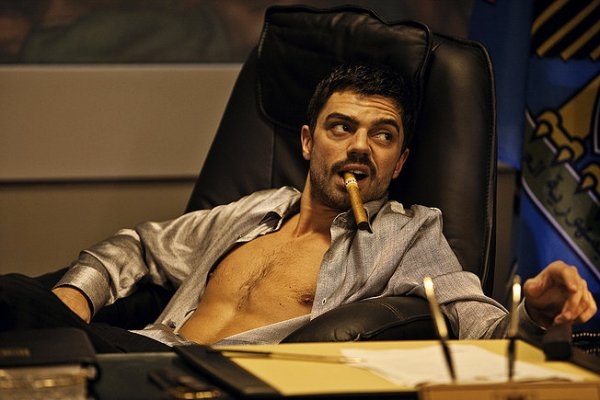 You're not even wondering which character this is?

For all of its messy structure and missing substance, The Devil's Double features a mind-blowing performance by Dominic Cooper as the two leads. As Uday, he goes all out, chewing the scenery and hamming it up splendidly. As Latif, he is more of a stoic leading-man type. To differentiate the two characters, he allows for very little commonality between them. Latif rarely expresses any joy and only smiles when he is impersonating the cackling, psychotic Uday. They are two sides to the same character, which is why I do not describe these as two separate performances.

Much like Joe Johnston's The Wolfman, The Devil's Double is actually about performance and acting. As a character who is required to impersonate another character who is crazy and ham-tastic, Latif struggles to nail the physicality and voice. The key to the whole performance is in the smile. Much emphasis is placed on Uday's teeth, his face stuck in an almost perpetual grin. Latif cannot bear to look at himself as he smiles in the mirror, wearing the false teeth. When he finally appears before the Iraqi army and delivers an impassioned speech to rouse the troops, Uday watches at home with his mother. "Look, mother," he says, "It's me!" The real shame is that the script never delves quite deeply enough into Latif's psyche, but it sure is entertaining to watch Dominic Cooper knock it out of the park.

MINORITY REPORT: Do any other world dictators need to employ look-alikes? I only ask because there are five different Fidel Castros outside of Starbucks asking me for change right now. - Martin R. "Vargo" Schneider