Sometimes I feel pretty depressed about my lonely, pathetic existence. But then I put things in perspective. I remind myself that I live in Kansas City, and like all things within this metropolitan area, I'm predisposed to inexorable failure. Then I shrug off personal responsibility and resign myself to the next humiliating outrage!

I'm aware this could be some pseudo-Copernican scenario, in which I'll eventually discover I'm the suction center of this vacuum of decay. After all, Kansas City started its decline right around the year of my accursed birth, 1945. But that was also about the time KC's longtime benefactor, mob boss Tom Pendergast, loosened his grip on the city's affairs (due to death). Under Pendergast, the bought-off police allowed gambling, prostitution and Prohibition-era drinking, allowing the 18th and Vine entertainment district to thrive, with hometown jazz from Charlie Parker and Big Joe Turner as the soundtrack. The Pendergast administration also built many useful buildings and boulevards, due to its favorable contracts with its own cement companies. Recent local government officials have been just as corrupt, but without the reassuring condonement of vices or any other beneficial effects to the community.

Kansas City still offers some seemingly positive features, but they're all accompanied by ruinous side effects. It contains many outstanding restaurants, all of which have contributed greatly to making Kansas City a grotesque haven for the morbidly obese. It was named the Fattest City in America a few years back, but Kansas City has fallen to 25th in the latest rankings, because a long stay at the top of any list would be inconsistent with its recent tradition of across-the-board unachievement. However, KC has experienced exponential growth in a category traditionally dominated by America's most noteworthy cities -- murder rate per capita. Kansas City: Gunning for that #1 spot! 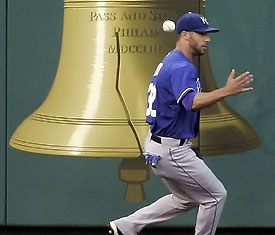 It's a "major-league" city with two professional sports franchises, both of which have been mired in increasing decrepitude since the last time either of them won anything, 25 years ago. The Kansas City Royals' current blueprint involves collecting players whose skill set consists entirely of "fast" and "white," a strategy previously employed only by slow-to-integrate Southern college football squads and wildly uncompetitive Olympic relay teams. The Kansas City Chiefs instituted innovative reforms last season, such as imploring all their offensive lineman to lose weight, a gambit that improved the players' average life expectancy (to age 38) while rendering them completely ineffective.

Finally, Kansas City has produced a couple platinum-selling recording artists in the past decade, but unfortunately they were David Cook and Puddle of Mudd.

So, where would an entirely hypothetical tourist go to have fun in Kansas City? The 18th and Vine district still exists, and there's probably even more money being funneled into it then there was in the Pendergast era, but without the brutal Mafia efficiency. Other than a couple active venues, which occasionally lure decent jazz artists with those mysteriously apportioned city funds but don't actually attract an audience because there's apparently no room in the budget for advertising and promotion, 18th and Vine consists mostly of fake storefronts built for Robert Altman's 1996 film Kansas City. A crumbling reminder of an unenthusiastically received movie about the city's glorious past, these ersatz buildings should have been demolished long ago by the metaphor police for egregious overaptness. 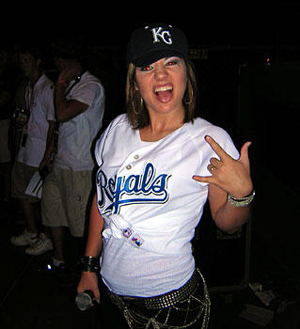 Minutes after taking her first step on a Kansas City stage, Kelly Clarkson fell on her ass. Coincidence?

Kansas City's "cool" area used to be Westport, which once contained six independent record stores; lots of clothing boutiques, tattoo parlors and nightclubs; and plenty of excellent restaurants. The restaurants remain -- I'll go to my grave (next year, cholesterol-related heart attack) praising Kansas City's food -- but there's only one music retailer left, and it's part of the FYE chain. Most of the clubs are gone now, too, after their hipness deteriorated irretrievably due to an influx of douchey suburbanites who'd grown stir-crazy in their own stiflingly quiet neighborhoods.

Said douches now frequent the Power and Light district, an obnoxiously garish downtown tax sinkhole. The Sprint Center serves as the Power and Light centerpiece, plopped in the middle of a bunch of terrible gimmick bars like an internally illuminated beached whale. It's a sports arena, for which the city's leadership paid many millions of dollars while failing to secure an actual sports franchise. So now it sits empty most nights, unless there's a Nickelback concert (April 8!) or a monster truck show.