Something Awful vs. David A. Tijoe

Background:Cliff Yablonski, who provides a valuable service to the world by making a large a detailed list explaining who he hates and why, recently found himself under legal attack when one of the featured people on his page decided to fight back against this grave injustice! After all, if somebody puts up a photo of you, that is obviously grounds for a very large lawsuit which involves key US government organizations. Here is the original picture and caption in question, ripped directly from Cliff's page: 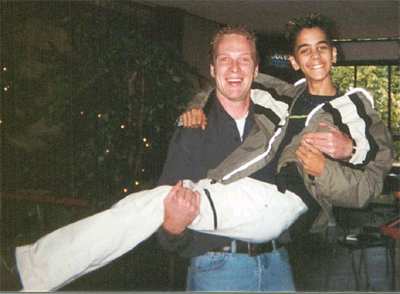 The sanitation workers in South Appleton deliver as well as pick up. I don't know what sewer he found that huge turd in, but it's definitely a conversation starter.

Poor Cliff. The guy just tries to do the world a favor by running his website and profiling all the mutants and freakshows in existence, and this is the thanks he gets? A lawsuit? Good thing Leonard was on the case!

Current Status: Resolved; plaintiff apparently grew weak at the sight of Leonard's legal muscle and crawled back into the swamp where he came from.

From: David A. Tjioe
To: Cliff Yablonski
Subject: REMOVE MY PICCTURE

you have unathorizedly put up my picture on "http://www.somethingawful.com/cliff/ihateyou/page-55.htm". I didnot give persmission for this and you put it up. I demand you remove it at once or I will notify the FBI,

I was initially very frightened by this email. For starters, the plaintiff was threatening to bring the FBI into the lawsuit! That couldn't be good for me, as I've seen the FBI in many made for TV movies, and they're fairly argumentative in court. Some of them even wear suits! Also, if you look closely, the name "D.A. Tijoe" kind of looks like "B.A. Barachus," who was of course Mr. T from "The A-Team." Assuming that Mr. T got hit in the head by a very large metal beam, lost all muscle mass, and gave up his already minuscule grasp of the English language, it seemed very plausible that he was teaming up with the FBI to sue me! All my financial riches I have gained from running this site could be up at stake! I Before I could employ the services of Leonard Crabs to protect me, Cliff Yablonski replied to the email:

From: cliff yablonski
To: David A. Tijoe
Subject: Re: REMOVE MY PICCTURE

go piss up a rope you ugly son of a bitch. next time I see you at the Dairy Queen, I'm going to cram my fist so far down your throat that I'll pull out all the condoms you swallowed last week. I'm not taking your freakshow ass off my page, clownskull. and I dont react to lawsuits well either, so watch your damn back, momma's boy.

This seemed like a fairly levelheaded and reasonable reply, as Mr. Yablonski is known far and wide for. Strangely enough, this did not seem to satisfy Mr. David A. Tijoe.

From: David A. Tijoe
To: cliff yablonski, webmaster, admin, Lowtax
Subject: Re; REMOVE MY PICCTURE

I demand you remmove my picture RIGHT NOW or I will take LEGEAL ACTION! My picture has been illegealluy displayed on http://www.somethingawful.com/cliff/ihateyou/page-55.htm Picture page55-02.jpg. If you don not remove it IMMEDIATLY I will sue! This is your last wanring!!!

Now things were starting to get serious, or as they say in the game Serious Sam, "now things are starting to get serious." Not only was Mr. Tijoe emailing Cliff Yablonski, but he was also sending mail to myself, the webmaster, and the administrator! Once all these very different people saw that Cliff was responsible for them receiving unsolicited email, they would undoubtedly be furious! I quickly brought Mr. Crabs into the situation so I could hopefully work my way out of this legal mess.

From: Rich "Lowtax" Kyanka
To: David A. Tijoe
Subject: Re: REMOVE MY PICCTURE

My lawyer, Leonard "J." Crabs, has advised me to exercise my 16th Amendment rights on this issue. He said it's "more than three times better" than the standard fifth Amendment, so my chances of winning the lawsuit instantly tripled. I don't know what Congress' power to collect income tax has to do with your email, but I'm not a lawyer like Mr. Crabs is. That's why I pay him big bucks (plus bus fare).

At this point, things began to really heat up.

Many people love to threaten to sue us. Luckily we have both Leonard "J." Crabs and common sense on our side, thus enabling us to easily defeat such trivialities. Remember - when you're on the Internet, you can threaten to sue for anything!