Think Before You Worship

Think Before You Worship 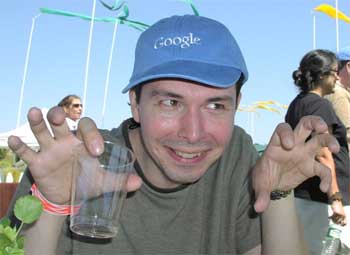 Do no evil, unless it makes you money.

There's a hardcore group of folks on the Internet who assume Google can do no wrong. To their credit, Google has spent years and millions upon millions of dollars cultivating this image, so I can understand where it comes from. The average Internet user seems to believe if they can't personally see a direct connection between ad revenue and a provided service, then the company responsible for such a product is some blameless, holy creature sent down by the good lord himself. "Well gee, Google offers all these services which don't cost me a thing, therefore they've got to be an unquestionable, infallible entity in my book!" the greasy nerd with 10-pound glasses exclaims while typing "MICROSOFT SUCKS" into his Google search bar. "Clearly this company only produces things for the good of all humanity! They aren't concerned with trivial things such as making money, dominating the marketplace, or boosting their stock prices!"

This type of idiotic, blind fanboy mentality has led to where we are today: the Google Web Accelerator. Millions of drooling bandwagoneers across the globe salivated at the thought of using yet another Google-produced product, once again passing over the fact that every business decision in Google's headquarters - and I repeat EVERY business decision - is made with the bottom line of earning more money. Google doesn't give a shit about you or me, unless you or me has the ability to give them money in some way. This is how every corporation is; they don't care about anything except making a buck. Yet Google's history, their expensive team of lawyers, PR people, and viral advertising, has allowed them to ascend past the image of a generic corporate entity with the same bottom line as every generic corporate entity in the world. Such grace and good fortune has allowed them to release the Google Web Accelerator without facing a single shred of public scrutiny. So what does this incredible free new service accomplish?

Google claims it magically speeds up your Internet connection, and for the average user, it does. This is done by caching entire websites on Google's servers, passing copies of any page a user visits and sending them to Google HQ. Basically they're just creating carbon copies of everything you read, every site you visit, every image you load, and storing them on their servers, under the idea that you will have a faster connection to their servers than you would to whatever website you're visiting.

Well here's the problem, folks: everything you view is now owned by Google. Do you read email? Well now Google reads your email, and now the entire world can read your email. Do you use private messages through a website? Well they aren't private any more; now anybody using Google's Web Accelerator can read them. Every single page you read, every single website you visit, every single cookie you use, every single thing you do on the Internet is now owned by Google and is viewable to anybody using their program. I hope you're completely comfortable with the entire world being able to see every single webpage you read and every single website you visit, because thanks to Google, it's now happening. Check out their privacy policy if you don't believe me.

I'm having to pay a coder just to figure out how to prevent Google from caching all the webpages on our forums. Why is this a problem? Well first of all, it's a giant security hole, as private forums for mods and admins can now be viewed by anybody. Thanks Google, thank you very much for sharing our sensitive information with the entire Internet, without even giving warning or notice to any parties involved! Secondly, our forums offer a private messaging feature, where users can send messages to each other which can only be read by them. It's like AIM or ICQ, but through a webpage. If you're using Google's Web Accelerator - guess what? - now anybody can read your private messages! Cookies, logins, sensitive information, private messages - they're all stored on Google's servers now, and they're all available for anybody on the Internet to read.

So how can a company like Google get away with this? If Microsoft had released something similar, you can damn well be sure millions of angry, greasy Lunix zealots would be carrying torches and pitchforks to Bill Gates' house. The reason Google can so brazenly trample over the entire Internet is because people let them. They spent so long carefully crafting their pristine Internet image and reputation that all their actions are now seen as faultless, for the good of all humanity. Google surely wouldn't do anything bad or evil! After all, their company's motto says so! You know, that company motto they paid a legal and creative team to come up with. For the company that makes millions upon millions of dollars. For a business fueled by capitalism, just like every other corporation in the history of the universe.

Making money isn't bad. The pursuit of money isn't bad. Money isn't bad. Failing to question companies that prey on you is bad. Google doesn't care about you or me or the Internet as a whole, unless one or all of these things can somehow make them another dollar. They are just like every other company and should be treated as such. Microsoft receives strict scrutiny for every move they make, which is a damn good thing because it keeps their company in check. Google doesn't, and this is what led to the release of their Web Accelerator program. Bending over to worship at the feet of a company just gives them a better chance to step on your back and boost themselves higher. Google is just another Microsoft without the bad reputation.