The following is neither fictional nor a joke: Jurassic Park IV is in the works, and it is about a squad of dinosaurs who have been trained by the government to kill people with firearms.

Maybe this is happening because no one would have taken Jurassic Park IV seriously if it had a more realistic story about dinosaurs who have been cloned for a fourth time when the first three attempts ended in complete disaster. Maybe the filmmakers realized they'd get paid either way and said "fuck it, let's go for the Snakes On A Plane angle" although that movie was also a complete disaster.

Either way, it's happening and there's nothing you can do about it aside from signing an online petition to provide others with a few moments of laughter. One question begs to be asked: If this is the plot that was decided on, what horrible ideas didn't get the green light? 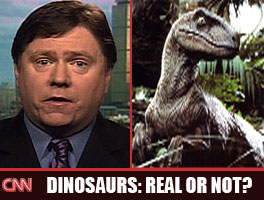 A religious group that believes dinosaur fossils are a fabrication of modern science clones their dead leader with a DNA sample that he left on an abortion clinic's front window mere days before his death. This man appears on 24-hour news networks in a series of heated debates with a velociraptor who insists dinosaurs actually roamed the earth.

Against all odds, the two set aside their beliefs and become steadfast friends after they unknowingly schedule book signings in the same store on the same day. When the two go on a fateful hunting trip together and come across a group of the religious leader's old friends, he must choose which side to hunt on and which side to kill.

When terrorists begin cloning Tyrannosaurus Rexes en masse and releasing them near major U.S. landmarks, the government responds by resurrecting another extinct species to battle them: silver trout.

Feel your patriotic heart beat stronger and faster than ever before as millions of trout face off against thousands of T-Rexes in some of the most stunning cgi sequences ever rendered. Featuring the same procedural animation software that powered the Mordor and Helms Deep battles in the Lord Of The Rings trilogy, as is evident in the climactic scene where a handful of trout were mistakenly rendered as orcs.

A thought-provoking biopic that examines the life of Jacob Collamer, the 16th postmaster general of the U.S. Postal Service. Involves no dinosaurs whatsoever.

In this wacky sports comedy, the world's greatest badminton player, S.H. Uttlecock, is at the top of his game. He rests easy at night in the Rolls Royce that's parked in one of his mansion's many bedrooms, confident that no one can match his skills. No one, that is, but a pterodactyl that has been trained by the U.S. government to beat the British at their own game.

As their rivalry heats up, the laughs keep a comin'! Starring Will Ferrell as the pterodactyl.

A baby brontosaurus survives the original Jurassic Park incident, only to be discovered by the Europe's most sadistic crime boss. For the next fifteen years he is trained to be a master of disguise, capable of pulling off impossible assassinations while remaining practically invisible. Now only one man (Jason Statham) can stop him.

Features an unforgettable scene in which the brontosaurus stomps on Louis Farrakhan in the middle of the Million Man March, then ducks behind a phone booth to replace his suit and bow tie with a National Park Service uniform before receding into the crowd. 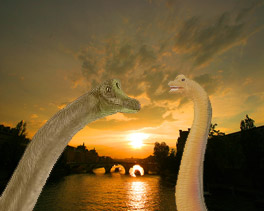 Trained by the government to adopt vaguely liberal ideologies and discuss philosophical concepts at length, a male and female brachiosaurus meet by chance on a European train and disembark together in Vienna.

Knowing they will likely never meet each other again, they open up and share their innermost thoughts and secrets as they meander through the city for one magical night. Featuring Mike Meyers as the voice of Mike Meyers' Scottish ghost.

When a film producer options the rights to John Hammonds' failed theme park, he hires a screenwriter to copy the plot of WE3, a comic about a small group of animals who have been trained by the government to kill with futuristic weaponry.

Ends in a confusing finale in which actual dinosaurs with guns attack fake dinosaurs with actual guns who are filming the movie-within-a-movie while Jeff Goldblum wrestles with his clone on a conveyer belt that slowly draws them both closer to a gigantic blade which is used by editors to splice frames of film.

In retrospect, maybe a movie about dinosaurs with guns isn't so bad. Just keep telling yourself that when you come across a movie poster that reads, "Guns don't kill people, dinosaurs kill people" next spring.