This is what the alien's vision looks like. How this species mates, we'll never know.Step Four: ruin classic moments. Ask anyone to name the scariest moments in the Alien films, and you're bound to hear about the famous scene where one of the aliens descends from an airshaft and silently grabs a marine. This image is so badass that even when it was used again in Alien vs. Predator, it somehow did not diminish its glory. And yet here, in Alien vs. Hunter, when the alien grabs Marcy and drags her up into the treetops, it basically takes this wonderful moment in horror movie history and rapes it until it can't do math. First of all, it's in broad daylight, and nothing is scary in broad daylight. Second, everybody else is watching this happen, so the creature's stealthy nature pretty much just vanishes, and third, it's Marcy. Nobody likes Marcy. She brings her death on herself by saying she doesn't believe in the alien, and that Lee and Tammy, who have seen it with their own eyes, must have imagined it. She also thinks "Javier" rhymes with "caviar." After she is killed in front of everybody, no one mentions her or her death ever again. It somehow detracts from the cool factor of a kill if nobody is alarmed by it to even bother mentioning it.

Step Five: lead up to a terrible climax. Through sheer dumb luck and the fact that the humans basically beg to be killed, the alien and the hunter whittle the earthlings down to just Lee, Tammy, Hillary, Freckles, and Two Fingers, the leader of a militia group that just happened to be cannonfodder, I mean, in the area. Much like the Highlander, with the other rednecks dead, Freckles inherits the sum of their hillbilly knowledge. This leads her to deduce that the hunter is, in fact, a hunter. Like her dear departed Pa, the hunter just wants to kill his prey, but he's too stupid to do it on his own. She proposes that they trap the alien, so the hunter can come and finish it off, and then he'll presumably leave peacefully. This proves to be difficult, largely because all the remaining humans are incompetent. For starters, their idea to trap the alien is to lure it into an open field, so it can't climb into the trees. If you're wondering why this is such a bad plan, try to trap something faster and stronger than you in a large open space, then ask yourself if its ability to climb was the reason why it didn't work out.

The second reason this plan fails is that it relies on the humans not doing anything stupid. The very instant that the hunter shows up like they wanted, Two Fingers attacks him, which is pretty much the opposite of what he was supposed to do (i.e., nothing). The hunter kills him, then kills Freckles with a stray laser. Even then, the hunter still can't seem to kill the alien. In fact, I don't think the hunter actually fires a single shot at the alien at any point in the movie, although I'm not about to go back and check. Instead, Lee gets his hands on one of the hunter's weapons, and despite never having fired one before, aims perfectly and destroys the alien in a single shot. Satisfied with his own incompetence, the hunter disappears. The last three humans - Lee, Hillary, and Tammy - laugh about the whole thing as they walk back to the Daily Acorn office. Yup, everyone they know is dead. Talk about funny! This brings us to our last point: 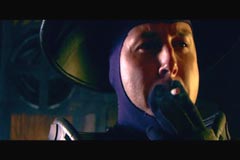 Note the cigarette. That makes him a badass, right? Right?Step Six: insert a pointless twist ending. The hunter returns to his spaceship, which is evidently in perfect working order despite having crashed into a fucking planet a few hours ago. He didn't actually kill the alien, but he did see it get killed, and he's willing to count that as a personal victory. Then the hunter takes off his helmet, revealing that he is actually human. That's right, in a shocking twist, the hunter turns out to be a human from the future who was hunting an alien onboard his own ship and somehow crash landed on Earth so far in the past that he doesn't even recognize it as his own planet, despite all the inhabitants looking like him and speaking the same language. You can reread that last sentence as many times as you like, it won't make any more sense. Just deal with it. I know I'll have to, every day for the rest of my life. Impressed by the fighting spirit of the humans he didn't accidentally kill, the hunter from the future vows to come back and hunt them sometime. With any luck, he'll kill his own ancestor and negate his own existence, much like I wish I could negate mine right now.

To take a movie as terrible as Alien vs. Predator and make it worse takes a certain kind of dedication, a willful commitment to being bad at one's job that is so pure, so intense, it becomes almost admirable. Alien vs. Hunter features wooden acting, pathetic special effects, and cinematography that makes it impossible to get any sense of where characters are in relation to one another, but its worst crime is that it was made at all. Who thought this would be a good idea? What sort of illicit substances does a person have to imbibe before they say, "You know what would be awesome? If we remade Alien vs. Predator with no budget, and the alien couldn't see, and the predator was a human from the future who doesn't know what humans look like." And more importantly, where can I get those substances?