Over here. Turn around. That's better; now you can see these reviews for this weekend's big releases! First off, Ian "ProfessorClumsy" Maddison ventures into the jungle to hunt down and kill Predators, then Joseph "Jay Dub" Wade cuddles up to Despicable Me like a werewolf on a camping trip.

Predators is One Ugly Motherfucker.

EXPECTATIONS: Predator is one of the greatest action films ever made. It has all the right elements; great pacing, consistent tone, thrills, spills, pussy jokes, surprises and Arnold Schwarzennegger. You could never recreate something so perfectly crafted just by flogging a dead horse, so it may come as no surprise to you that my feelings toward this belated sequel are somewhat mixed at this time. Let's hope that it has everything that Uncle John needs.

REALITY: Predators is a tedious failure on almost every level. When it opens with several bad-asses falling from the sky into a mysterious jungle so that they can be tough guys in each other's company, you know you're in for a tiresome ride. As these characters establish just how tough and awesome they are, they eventually run into some of those crazy aliens that hunt bad dudes. The bad dudes get hunted until the hunting is done. That's pretty much the entire plot of this movie already, which isn't necessarily a bad thing. 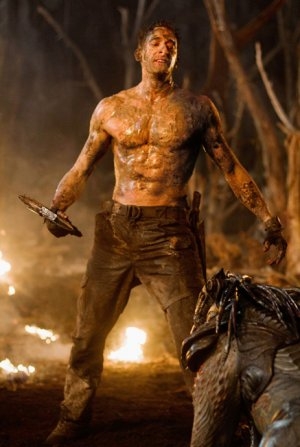 Look familiar?What is a bad thing is the laborious way in which this light story is told. We have nine main characters, most of whom are so similar in tone and personality that the only way you can tell them apart is from which weapons they use. On top of that, we have three antagonists in the form of the titular Predators, none of whom have any of the presence and personality of the creature from the first film. In fact, these new and improved super-Predators, or whatever you want to call them, look ridiculous and cumbersome. Remember the infamous "You're one ugly motherfucker" line? Well, a more appropriate line here would be "You're one stupid-looking pile of boring, pointless shit." But that may just be my response to the film itself.

It's not all bad, though: There are two interesting and entertaining characters. The first of these is Edwin (Topher Grace), a doctor who doesn't seem to fit in with the team of killing machines. He is the only character who doesn't spend his entire screen time spouting bullshit macho soundbites and, as such, manages to be genuinely relatable and charming. I may be lonely in my appreciation of Topher Grace, but you can't deny that in an ensemble of straight-faced hard men, his comedic approach to the material is very much needed. For the first twenty minutes, he pretty much seems to be the only cast member who is enjoying himself appropriately. That is, until Noland (Laurence Fishburne) shows up.

Noland is a treat; as a kind of cross between Powers Boothe in Southern Comfort and Ice T in Surviving the Game, he absolutely fits the mould of the film. He has been surviving on the predator game preserve for ten years, and he has used that time to learn about the Predators, perfect his survival tactics and go utterly insane. Fishburne's performance is pitch-perfect, as he banters with his imaginary friend and generally acts crazy as hell. It's a damn shame that his presence in the film is so brief. Had Noland been the main character, and if Predators were an exploration of his isolation and declining mental health, it would have been brilliant. As it stands, we have a shining gem of a cameo in the middle of an otherwise dull film. What an absolutely tragic waste of an opportunity. 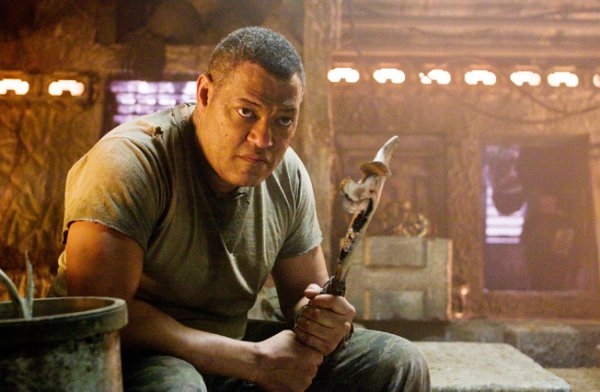 For someone fighting for survival in a Predator game reserve for ten years, Larry sure looks well fed.

So, maybe you're sitting there reading this and wondering when I will get to the real meat of this review. What is the action like? This is an action film, after all. Well, it's not good. It's the opposite of good. Which is bad. Most of the gunfights in this film basically consist of the cast members firing their weapons directly toward the camera with cutaways of bullets missing their intended targets. I get the feeling they're trying to make something visceral here, that audiences will feel like they're being shot at and will want to duck and dodge. This doesn't work. It's just headache-inducing flashes and noise, and it raises an even bigger problem.

In an action scene, the most important aspect to convey to your audience is geography. In an early scene, the Predators unleash some alien hunting dogs to test their victims' strengths and weaknesses. We're given no clues as to how far away the dogs are from the shooters, how many there are, where everybody is or anything else that might make the scene coherent. This is a problem I've seen in a lot of action scenes that involve CGI creatures. Apparently they just film the dudes shooting their guns now and worry about the actual logistics of the action later on.

Also, If I were one of the Predators, I'd be pretty disappointed in the choice of victims. These super-soldiers can't shoot for shit. The entire sequence involves everybody wasting as much ammo as possible as they fail to shoot a huge target that is running directly toward them in a straight line. Considering how early in the film this occurs, the prevailing sense given here is that this group of idiots talk a good fight, but are completely ineffective in any kind of combat situation. 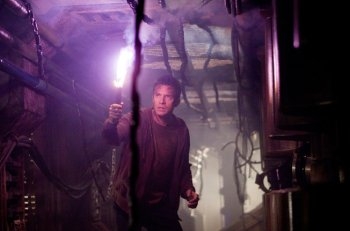 Every sci-fi action movie needs a scene where someone uses flares to light up dark room.There are several scenes that involve the Predators themselves in lengthy fights. You may think this sounds awesome, but watching these top-heavy head-bobbers try to dodge and weave nimbly is actually slightly embarrassing. At one point, there is an actual sword fight between a Japanese assassin (because all Japanese people need to pick up a sword at some point in an American action film) and a floppy-headed Predator. Remember that scene on the bridge in the original Predator where Billy decides he's going to try and have a knife fight with the beast? Remember how that fight was just Billy's offscreen screaming? Pretty effective in my opinion. This sword fight feels like it's trying to make up for the knife fight occurring off-screen, but it's such a waste of time and it feels like someone spilled some Anime on the script. There's a reason you don't film guys with huge rubber heads jumping around in wide shots, and that reason is very apparent here.

Finally, and perhaps most abstractly, this film loses the whole point of the original. Gone is the yonic symbolism inherent in the Predators, now that their infamous vagina mouths have been reduced to a family-friendly opening. Gone is the scene in which a group of men mow down a huge section of jungle with their giant phalluses, but completely fail to nail their target. Gone is the ironic ending in which the vagina-faced Predator is crushed to death by a giant erection. The not-so-subtle exploration into the nature of male penile fortitude and emasculation is shattered and rebuilt as a dumb series of pointless events. Predators explores a much less interesting or original premise, choosing to side with the "humans are the real monsters" message that we've seen so many times before. Even that I wouldn't mind so much, except that somewhere along the way, they forgot to have them some fun.

MINORITY REPORT: Clk-clk-clk. Predators is a bleak and petty slander against the fine upstanding people of the predator race, which is unfortunate if not entirely new. (The humans' jealousy of our advanced technology and morality has compelled them to churn out films painting us as savages since 1987.) We have spaceships and invisibility cloaks; they have Jersey Shore. So it goes. Based on their fondness for that show, is it entirely unreasonable for us to hunt and kill them? One would be hard-pressed to find any organism in this galaxy who would say "yes." Except for the humans, of course.

And that's where bias comes into play -- as a documentary comprised of reenactments and lacking any kind of narration to provide context, Predators counts as a failure of epic proportions, the latest (and, according to President Orack Babama, the final straw) in a decades-long smear campaign against our superior way of life. This aggression will not stand; if ever a film served as justification for war, it is Predators. Damned our polite way of sending onesies and twosies to Earth for a hunt or importing a dozen humans on occasion; Babama is correct in his decision to mobilize the troops. Goodbye, humanity, and good riddance. -Oger Rebert, film critic emeritus, The Daily Hunt