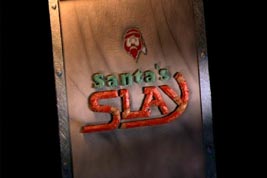 Overview: Santa's on a murderous rampage, and it's up to a couple of scrappy teens to stop him!

The Case For: You get to see some of the most annoying people in show business killed for your amusement.

The Case Against: After all that's done with, there's still a whole lot of movie.

If you look to the right of this page and scroll down a bit, you'll find the mission statement that guides these movie reviews. It says it all succinctly and beautifully. We review the absolute worst movies out there. It also says something about every writer on this site but me being a huge nerd. The specifics aren't important. The point is, while I've always taken that mission to heart, even at great cost to my health, sanity, and personal hygiene, I've also always thought of myself as a man on a quest. It was my hope that if I searched long enough and subjected myself to enough bowel-emptyingly bad movies, I would eventually find that diamond in the rough, that needle in the haystack, that Alec in the Baldwins: the good bad movie.

I know, I know.It is a rare and mystical thing, the good bad movie. All of the elements have to be just right. While most good bad movies embrace their tiny budgets, it's not enough to just say, "We're aware that we have a tiny budget and no talent, but we're going to have fun making this movie anyway, because we're just a bunch of goofy, nutty, off-the-wall hilarious guys!" Not even the addition of an eloquent "H'yuk!" can change the fact that an attitude like that can only lead to jackassery the likes of which I have... well, the likes of which I have seen many, many times, actually. Nor is it enough to try to make a movie "so bad it's good," which inevitably ends up just being so bad it's bad. No, it takes plenty of talent, effort, and moxie to make a good bad movie, a film with absolutely no cultural or social merit whatsoever that nonetheless is awesome beyond its means. Evil Dead and its sequels are often touted as the gold standard in good bad movies, and they haven't had a lot of competition in recent years. Still, I've always held out hope that I would stumble onto a hidden gem, which I could then share with you, the loyal readers. This... was not supposed to be that movie.

When my fiancée and I first spotted Santa's Slay in the video store, we initially brushed it off as another godawful holiday-themed gorefest. It certainly has everything working against it. The groan-inducing title is not only a pun (see, because Santa rides a sleigh, get it?), but is also flat-out stupid. Come on. Let's take away the pun. If you came across a movie called Santa's Sleigh, is that a movie you would want to see? How about JFK's Limo? George H. W. Bush's Catamaran? Jack from 'Jack and the Beanstalk's' Beanstalk? I didn't think so. And if we look at the pun the other way - that is, if we pretend that Santa actually drives a Buick, and the word Slay refers solely to the act of killing - then this just sounds like a retarded movie about a killer Santa Claus. Which is precisely what it is. And that just sounds stupid, doesn't it? It doesn't help that the movie touts as its big star none other than Bill Goldberg. Yes, that Bill Goldberg, the former heavyweight champion of the WCW and WWE, and still wrestling's most famous Jew. This is a man who went by the creative stage name "Goldberg" because "The Hammering Hebe," "The Killer Kike," and "The Meanie with the Beanie" were all taken by Yiddish porn stars. Still, much as Bill Goldberg might be the Chosenest of Chosen People, he's still a wrestler, and wrestlers traditionally do not make great movies. And when the movie's cover features Bill Goldberg dressed as Santa, screaming and wielding an icicle in a threatening manner, all logic dictates that this movie must suck as hard, if not harder, than anything has ever sucked before. 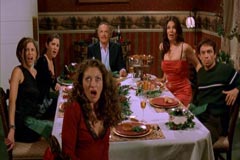 Even they're shocked to see them.But, truth be told, it doesn't. A large part of that is due to the opening scene. We find a family of WASPs sitting down for a nice Christmas dinner. From the underhanded barbs and outright hostility the members of this family hurl each other's way, we learn two things: first, that this is a family with some deep-seated resentment issues, and second, that writer/director David Steiman either has a lot of money sitting around or is secretly Extortius, the God of Blackmail. I can't think of any other way that this movie could get a cast like this. The lady of the house is played by Fran Drescher, a.k.a., The Nanny. Her darling son and/or lover is played by Chris Kattan, of Corky Romano fame, also known for dressing in red overalls and humping men on live TV. One of his sisters is none other than Rebecca Gayheart, from the Urban Legends films. Two other sisters are played by real life twins Annie Sorell and Alicia Loren, known for playing twins in every movie that can justify casting them, including the fondly remembered Cruel Intentions 2: Punishing You for Liking the First One. With a room full of people this recognizable in the first scene, you just know that they're all about to die. Seeing all of these irritating screen presences obliterated in a bloody and brutal fashion is all I could ever really ask for from a movie.

I've saved the best for last, though. The icing on the cake, the cherry on the sundae, the happy ending on the massage, is that the father of the household is played by none other than Sonny Corleone himself, Mr. James Caan, who chose to remain uncredited for some reason. Now, you might be saying, "Sure, all those other guys are annoying as hell, but James Caan is a fine actor." And you're absolutely right. But if we've learned anything from The Godfather, it's that James Caan is not only a terrific actor, he's also a lot of fun to kill! 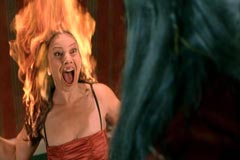 We were all thinking it. Only Santa had the guts to do it.And killed he is. As one of the twins says grace before the meal ("Thank you for not making us poor... or Samoan"), Santa Claus bursts in, looking bigger and meaner than a Santa Claus ever has before, with the exception of that one Santa at the mall who always smells like whiskey and pedophilia. He punts the yappy family dog into the ceiling fan, then stabs two knives through James Caan's hands, pinning him to the table. One of the twins tips over backwards in shock and impales herself on something or other; the mechanics aren't the important bit here. Santa then drinks a huge gulp of liquor, then spews an alcohol cloud into an open flame, causing a fireball that engulfs Fran Drescher and sets her head on fire, fulfilling the fantasy of everyone who owned a television between 1993 and 1999.


As Drescher screams, Chris Kattan tries to intimidate Santa with spastic martial arts bravado, the kind of jerky motions that serve to remind us of how he became a semi-noticeable quasi-celebrity in the first place. Santa polishes him off with a quick kick, sending Kattan smashing into a cabinet - fair payback for Mango, Mr. Peepers, and every other flailing elfin Saturday Night Live character in the last ten years. Noticing that Drescher isn't quite dead, Santa drowns her in a bowl of eggnog before breaking a leg off the table and using it to cave in Rebecca Gayheart's skull. Cleverly improvising once again, Santa takes the star off the top of the family's Christmas tree and whips it like a shuriken, killing the remaining twin. With the rest of the family dispatched, Santa returns to deal with James Caan, whom he offs once and for all by ramming an entire turkey leg down his windpipe. Set to "The Russian Dance" from The Nutcracker, it is a wonderful scene. I could watch it all day and never get tired. In fact, I'd be willing to give this movie an unreserved thumbs up if not for one thing - the opening credits haven't even rolled yet, and there's still a whole movie to go.