Thursday, Aug 18, 2005 by Zack "Geist Editor" Parsons (@sexyfacts4u)
The only thing standing between you and a bad tattoo is a particularly ethical tattoo artist and, of course, Fashion SWAT.

Zack: If there's one good thing to be said about bad fashion it's that it can easily be changed. Feel ashamed of that yellow leather jacket with eightballs on the sleeves? Throw it away! Paisley leggings setting off alarms at airports? Burn them! The same options are not available for bad tattoos. They are the bad fashion that you're forced to wear every single day of your miserable lives.

Dr. Thorpe:Today's Fashion SWAT is about two dumb things: tattoos and Americans. No, not all tattoos and Americans are dumb, but lord knows these are. While most Fashion SWAT updates contained photos culled from one place, these tattoo photos came from the furthest reaches of the internet, from the slipperiest corners of BMEzine.com, and from the dankest reaches of Google Image Search.

Zack:Special thanks go out to Lowtax for suggesting this installment's theme. Get ready for a wild ride through some of the worst tattoos that money can buy. 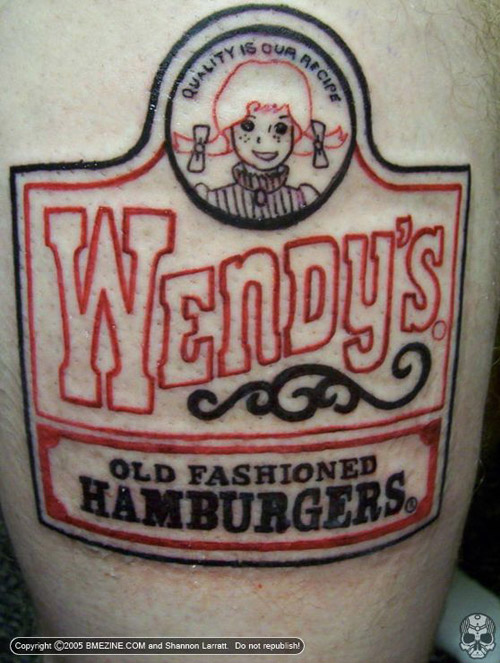 Zack: Man, I've heard of brand identification before, but jeez...this guy needs to have a talk with goldenpalace.com

Dr. Thorpe: A lot of the tattoo photos you see are "enlarged to show texture" like a Cheerios box, and human skin does not need to be seen like that. It looks like a Wendy's brand burnt into a frozen, plucked chicken.

Dr. Thorpe: That's the other huge problem with tattoo photos. People get excited and want to take photos right away while their skin is still shaven and the tattoos are still puffy and oozing ink and meat juice. This guy probably oozes meat juice all the time anyway though, considering he loves Wendy's enough to get a tattoo of the logo.

Zack: I think the most pathetic thing in this picture is that the guy got the registered trademark logo tattooed on his body. Like some Wendy's exec was going to see his calf and then sue his ass because he didn't properly identify their copyrighted material. "This man's leg might have confused consumers into believing that he was an authorized Wendy's outlet, which he is not."

Dr. Thorpe: It would be pretty fantastic if they did sue him for this though. Can you imagine that? The judge would probably decide that Wendy's owned his corpus for all eternity.

Zack: Maybe it was all an elaborate scheme to get himself chosen as the next Dave Thomas style spokesperson. "I loved these burgers so much that I did this..." and he throws his meaty leg up on a Wendy's table and rolls up his zubas.

Dr. Thorpe: I bet he shows it at the counter when he orders a Classic Triple with cheese in a pathetic attempt to get free food. It might work the first couple of times, but after that the employees at his "local" would be like "get the fuck out, Wendy's Tattoo Guy, we aren't buying it."

Zack: Or possibly this is some secret cabal tattoo like the Emperor's Order from the "Tie Fighter" game. The dude walks into Wendy's and this panel hisses open. He dons a robe and joins with the acolytes in praise for the endless beneficence of Dave Thomas. He also has duties as a member like sabotaging the potato supply at Carl's Jr. or spiking the Shamrock Shakes at McDonalds with antifreeze.

Dr. Thorpe: I haven't figured out whether that makes him more or less pathetic than if he's just a big dork with a Wendy's logo scratched into his meaty trunk.

Zack: It makes him a little less scary. Some dude who just chooses to get that tattooed on his leg of his own free will is obviously a danger to society.

Dr. Thorpe: He's a danger to himself!

Zack: That's what his doctor said after his last cholesterol test anyway.

Dr. Thorpe: He's going to make everyone around him fat, too. They'll see that logo on him and go "hey, yeah, I could use a Frosty." I think the Wendy's logo is sort of tailor-made for tattooing, because it's got that little tribal pattern right in it.

Zack: I would like to see someone with a really shitty logo from a failed business on their leg. We need someone like that to be a spokesperson to keep dumb kids from doing this to themselves. He could go around to high schools and show off his Planet Hollywood logo and scare kids straight. "Remember this stupid idea? I thought it was great, now look at me. I even convinced my girlfriend to get a Fashion Cafe tattoo!"

Dr. Thorpe: Yeah, tell me about it, this Virgin Cola tattoo on my shoulder is a constant source of embarrassment for me.

Zack: Fuck you, Dr. Thorpe! My tattoo is not like THAT. You can still buy Zima a few places!

Dr. Thorpe: Oh, jeez, I'm sorry, I swear that wasn't a dig on the Zima tattoo. That thing is still like a magnet for gash, even after all these years.