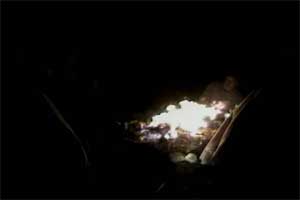 The lighting situation at the beginning of the "campfire" scene. I'd put up a comparison shot but it looks exactly the same five minutes later.At this point the story leisurely picks up where it left a half hour prior. Harris, the he/she giving them a tour of the forest, decides to tell them about a vicious double murder that took place in that very forest a few years prior. A man, she says, came home and found his wife cheating on him, so he dressed up like a clown, then killed her and her lover with a machete. We are treated to the story through a video montage that was likely created at the local video hut, complete with fade-in fade-out scene switches and even that awesome effect where the screen turns into a smaller screen and disappears into the new scene.

I’m going to spoil something here. Although we’ve only seen the clown about a minute and a half through the entire movie at this point, it is obvious that Harris is the killer. Sykes’ knack for foreshadowing is only outshined by his flair for directing.

But here’s the problem: If Harris is the killer, and she knows she is dragging these people into the woods to kill them, couldn’t she have come up with a better cover story? Granted, being cheated on sucks, but you don’t hear about people becoming nutjob serial killer clown survivalists because they caught their wives knocking boots with some other redneck.

Worthless plot point aside, the group decides to go to bed. When they wake up in the morning they make a shocking discovery: Harris has been murdered! Actually, she hasn’t been killed so much as turned into a dummy and chucked into a fire, but we’re not talking about “Casablanca” here. The four survivors do their best to act scared for a little bit, when whaddayaknow, the clown shows up. 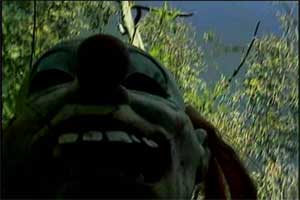 Before becoming a psychotic serial killer, the clown starred in the Smashing Pumpkins' "1979" video.There seem to be two schools of thought when it comes to slasher movies. The first group likes to slowly spread the killings throughout the movie and save a little punch for the end. The second group saves the biggest bunch of horror for the end, using suspense and bare breasts to keep the audience entertained. Brad Sykes, on the other hand, has founded a new philosophy, one where absolutely nothing happens for the first hour of the movie and then everyone dies in the last fifteen minutes. Though it is a generic slasher on every other level, Sykes decides to buck tradition at this point and kill Steve off first. Generally, avoiding clichés in a horror film is a good thing. However, it is usually a good idea to kill the more annoying characters (namely every other person in the movie) first, before getting rid of the one halfway-decent actor of the bunch.

Like I mentioned before, the copy of Camp Blood I watched is part of an “Ultimate 3D Horror Collection”. During Steve’s epic fight scene with the clown, however, I came to a stunning realization: Jokes aside, Brad Sykes is incapable of doing a single thing right when it comes to making movies.

Sure, it starts out blandly enough. Steve encounters the clown by a creek and they have a fight that consists of sort of moving around and grunting. Steve hits the clown and manages to get away, and then the two run through the creek. At this point (and this point only, as far as I can tell) does the movie ever cross the border and bring the terror of “Camp Blood” into a new dimension. As Steve runs across the creek, the movie slows down and a shot of some splashing water goes three-dimensional for a minute.

Who knows? Maybe Sykes is some sort of demented genius. Maybe it was a joke for him to put as many outright lies as he could on the DVD case before shipping it off to the unsuspecting public. As I said before, there is no “horror” in this movie. It is not the “ultimate” anything, and as far as I can tell a two-second shot of some water doesn’t classify a movie as being 3D. If I were to write the back of the DVD case, it would say something like this:

Join four campers as they trek into the woods (guided by an angry lesbian) for a night of camping they you’ll never forget (even if you want to). Amazing low-definition camera effects mark this excremental exercise in cinema, even as horrible acting and ugly women burn your ears and retinas! Not for the faint of heart.

After Steve bites it, it’s time for Jay’s girlfriend to die. In an amazing plot twist, she is not killed by the clown: Instead, Jay somehow mistakes his short, blonde girlfriend for a clown in a blue jumpsuit and stabs her. Why? Because he has blood in his eyes. I’m no doctor, and I’ve never had my eyes filled with blood, but I’m fairly sure just getting a little in your eyes doesn’t make you see everyone a foot taller with bright red hair and a machete. Then again, I'm not Sykes, who I wouldn't trust with three dollars to go buy me some cigarettes, let alone the $75 someone had to front him to make "Camp Blood."

After seeing her friends die, she decides maybe if she gets out of the woods she might not get killed. She stumbles upon the forest's parking lot and finds Jay's truck, which is mysteriously unlocked with the keys in the ignition. She gets chased around by some old man who was given less than two minutes of screen time prior to this appearance, and finally, after a scene that looks like a slow motion Benny Hill bikini chase, she gets in the driver's seat. 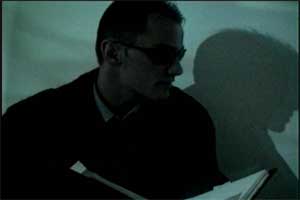 Hello again, angry Doogie Howser. I see you got a job as a cop! Or maybe just as a totally different character within the movie!I think at this point Sykes has made as many mistakes as possible with cinematography, so he starts to discredit quantum physics as well. The clown somehow ends up in front of the SUV Tricia is driving. It gets run over, falls down, and it is revealed that the clown was, in fact, Harris. Tricia starts to drive off again, when all of a sudden, the clown is in the backseat of the truck.

The surprise scare, of course, is nothing new to the slasher genere. Finding a decapitated head in a freezer isn't a big deal. Opening up an attic ladder and having a body fall out isn't an issue, either. However, when you start fucking around with direct continuity -- especially when there is absolutely no way you could have missed the error while reviewing the film -- there are problems. Sykes does not show the clown getting into the truck. He does not show it grabbing ahold of its bumper after getting run over, nor does he show a bloody hand grasping for a door handle. Tricia runs it over, then literally ten seconds later it is in the back seat, trying to choke her.

We're lucky Sykes isn't concerned with things like "story" and "making things make sense," however, since the movie suddenly cuts to a mental hospital. Well, maybe not a mental hospital so much as a bedroom with white sheets hung up over the walls, but you get the point. Tricia is sitting in a corner, sobbing, when some doctors and police officers (who are the same people from earlier in different costumes) approach her. In a totally unclear ending that could have gone a million directions, from Tricia being the real killer to the clown coming back, the film finally realizes its full potential: As an ashtray or maybe a shotput.

And that’s it. The movie ends without an explanation, let alone an apology, and the viewer is all the worse for having watched it. For some reason every video store in the country feels the need to have "Camp Blood" in stock, so I'm sure Brad Sykes is laughing at us all right now while counting his money and possibly doing heroin through a vein in his forehead. With any luck, someone will replace that heroin with Draano one day. Karma gets everyone back eventually.