Subj: MY LUCKY BEANS AND THE HORSE

HELLO!!!!!!!!!!! I saw the most beautiful and gallant horse the other day. As I drove past his field he ran beside my car as if to say hello or as if to chase me in horse anger. My heart raced just as it did in the early years of horse ownership and I was reminded of the two-year period your mother would come to call "The Bean Scheme" where I put not only my life but my livelihood on the line thanks to the promise of riches planted in my brain by a neighborhood horse and my famous fancy beans planted in my front yard by me. 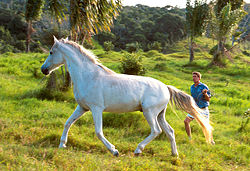 My main problem for a long time was that I planted some beans in the yard, which wasn't a big deal at first but over time the bean vines took off and started slowly spreading into the neighbor yards. A lot of people were mad at me but what else is new!!! When one guy's kid couldn't get his bike out of the vines he came over to yell at me about it. As I was cutting the bike tires free from mother earth's long fingers he told me "You Better Do Something With These Beans. No One Can Eat The Beans They Mess Our Stomach Up. These Beans Are The Worst" so I reminded the man that the stray horse from down the road eats the beans every morning when he comes back from looking at the lady horses at the other farm (I Will Not Say What He Really Does With The Lady Horses) but yes he stops to much on the beans.

My brain lit up with activity!!! I could sell the beans in cans and make back all the money I was spending on cutting bikes out of the beans. After harvesting them all I had about 600 cans of my famous lucky beans but they needed a label so I got photographs of the horse eating the beans one morning and his "Horse Thing" was still out and "Very Prominent." I believed this would indicate to the buyer the power that comes from eating my lucky beans. To sweeten the deal I wrote on the label that there was a chance to win inside every can (Scam) but to make it true I put a laminated business card inside one can of my lucky beans that said "You Win" and told the winner to call me to get their prize. I did not know what the prize was. 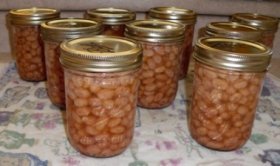 I sold all the cans of beans to the local grocery store and for many months nobody bought them because I would see them there all the time but over a year later, long after I forgot about it, the phone rang. It was the winner. He read the business card to me over the phone including the special code word on the card that let me know he was truly the winner. (The code word was "Beans") and he asked what the prize was. I probably sounded scared because I didn't know and then I made up that he can come to the Horse Dance tomorrow. He sounded very angry and said he would be there but I think he was only coming to yell at me. I stayed up all night setting up the Horse Dance.

As the neighborhood horse walked around eating beans after its morning routine I lured it into the backyard with a handful of food (beans) and nice sayings. The Horse Dance was held in our normal backyard and for refreshments there was ice water and a big punchbowl full of my fancy beans that nobody wanted to eat except the horse. I wore my old wedding suit and waited for the guy but he never showed up. Setting up the party made me very tired so I fell asleep out in the yard and woke up to the neighborhood horse licking my hair to wake me up or to taste my hair.

I guess instead of dancing the guy had called the supermarket to complain and they gave us all the beans back so now I automatically had 580 cans of horse food. Jackpot!!!!!! The horse knew it was food for him because it had his picture on the can (Very Smart Horse) and I started letting him sleep in our backyard because he got really tired after eating tons of beans. That is how we got the horse, best friend for many years!!!!!