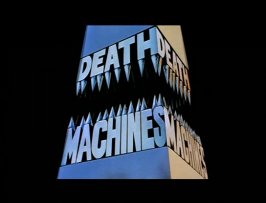 Overview:"Death Machines" follows a trio of martial arts assassins who don't really know martial arts and don't assassinate that many people. The closest thing to an actual "death machine" in this movie is a bulldozer.

The Case For: If you liked "Bio-Dome", you'll love "Death Machines"! Which is to say, if you like shitty movies you will love this, because it sucks.

The Case Against: How can you make a kung fu movie without involving a single person who actually has any idea how to perform kung fu? How would you like it if the Chinese made a Hollywood action film without a wacky black character that shouts a lot? 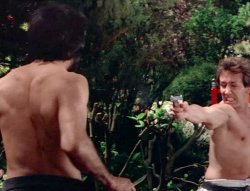 Don't bring your fists to a gunfight, even if it was supposed to be a fistfight and the other guy is just a dick.Spastic troll Quentin Tarantino likes to state that a lot of his love for filmmaking comes from watching shitty 1970's grindhouse flicks and old kung fu movies. If this is the case it only helps prove that he is a crazy asshole because no one in their right mind would ever want to emulate a movie like "Death Machines". When the movie started and I had my hair blown back by a $10 synthesizer screeching some semblance of a menacing theme song while a little cartoon showed a metal pyramid sliding open to reveal the movie's title, I thought it was kind of retro-charming, kind of like a rerun of an old 70's TV show. Soon enough, however, I realized that it was just horrible, like a movie based on an old 70's TV show.

The movie starts with a young Asian woman supervising martial arts training outside some sort of secret compound. It's clear that the woman is in charge of the operation because not only does she have a perpetual frown, but her hair is done up in a hairdo that resembles a beehive but actually has more in common with the giant African termite mounds that take twenty years to build. She watches grimly as two martial artists face off on a small bridge over a stream, vying for the privilege of being first chair in the evil organization's orchestra of pain or whatever the hell it is they call their varsity squad. As the two warriors shuffle back and forth on the narrow bridge they occasionally launch a feeble attack which suggest some degree of martial arts skill but not enough that they would demand more than the catered breakfasts and bag of blow that the movie was able to offer as payment.

The two fighters continue to engage in mortal combat as the camera moves to a second fight, where two more martial artists face off while balancing on rocks dotting the stream. Without drawing undue attention to the fact, I found it interesting that the first set of fighters were both Asian, while the two fighters in the stream happened to both be black. I didn't think much of it until the camera again moved to show a third pair of fighters, both of whom happened to be white. I guess this just goes to show the movie's age, since any evil organization nowadays would be required by federal law to ignore race in their hiring practices, but it was a different era back then so I'll let it slide.

As the Asian woman with the thirty pound hairdo observes, the three pairs of fighters continue to deliver feeble kicks and slow, telegraphed punches. Eventually winners begin to emerge -- first one of the Asians is sliced with a sword, and then one of the black fighters is stabbed with a spear. Meanwhile the two white men continue to appear evenly matched when one of them, spotting a momentary opening, gains the upper hand by DRAWING A GUN AND SHOOTING THE OTHER ONE. I suppose he could have just done that at the start of the fight, but maybe he wanted to soften up his enemy's chest with a few punches and kicks before he propelled a bullet through it.

Once the three champions are assembled, they head inside where the Asian woman and her fu manchu-mustached assistant rub their palms together and cackle about what they have accomplished. "These three men will form the nucleus of the most deadly group of assassins the world has ever known," the woman says. Actually it sounds more like "thee fwuh muh wih foh foh oog mmf zp" because she has the thickest, most unintelligible Japanese accent I have ever heard, something not helped by the synthesizer score which continues full speed ahead and steamrolls over what little portion of her enunciations might be otherwise intelligible. "They are programmed to kill on my command fewf puh ng soh kwm dprg," she continues, her neck visibly straining under the weight of her comically gigantic wig. The three newly crowned death machines look at each other and pretend to understand what is going on.

As the death machines lounge around waiting for something to do, the scene shifts to the office of a local crime lord who calls a hitman agency ordering that two men be killed: a Chinese karate instructor and a bank vice president. I didn't think Chinese people generally ran karate dojos in America so that might explain the former, and the latter is probably corrupt or something, I don't know. The crime lord demands that both men be killed within the week. Since neither target seems to be a particularly important person I don't know why the crime lord has to contract a hitman agency instead of just ordering some of his thugs to wait in an alley and shoot the marks when they walk by. The best reason I can come up with is that the movie might take place in New Jersey where people are legally barred from pumping their own gas or assassinating their own enemies.

The contract hit agency aims to please, so they immediately send out assassins to take care of the two marked men. The first hitman goes up onto a rooftop and pulls a disassembled sniper rifle out of a briefcase, quickly screwing it together and drawing a bead on the karate instructor who is taking a walk on the street below. The assassin aims at the instructor's head, then waits for about thirty seconds while the target passes behind thin tree branches and other nonsolid obstacles. Finally, just as the karate instructor is about to enter a building, the assassin squeezes the trigger -- but the shot goes astray as one of the death machines pulls the rifle out of his hands. Apparently the death machines have telepathy as well as mediocre kung fu skills because they somehow knew exactly where and when an assassin was going to take out a target they had no knowledge of. Before the assassin can protest that this makes no sense, the death machines hoist him up and throw him over the ledge, where to add insult to injury, he lands right on his own car as a meter maid is writing him a ticket. His next of kin is going to be pissed that not only does the car he just inherited have a giant corpse-dent in the hood but he has an outstanding fine. This helps show just how monstrous and inhuman the death machine trio really are.