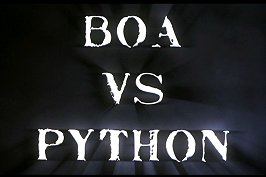 The Case For: The CGI used to create the oversized reptiles isn't shockingly bad, just sort of standard-bad, which can be considered a sort of plus, kind of similar to how subtraction is like adding a negative number.

The Case Against: The snakes are only onscreen for about a minute total. The rest of the movie is made up of people explaining why they aren't seeing the snake right at that moment. 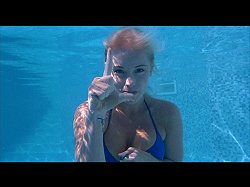 My god, it's like she's known me all my life!The "giant snake" film genre has undergone a minor renaissance as of late. Well, maybe I should say that it was pretty much born as of late, since before the advent of CGI filmmakers spent their time making movies where the actors were menaced by something a little easier to create, like vampires or flying piranhas. But within the last decade, Hollywood has churned the following hits and/or misses:

It's within this context that we have "Boa vs. Python," which attempts to fuse the classic "Boa" and "Python" franchises, much like "Alien vs. Predator" or "Freddy vs. Jason" or "Bart vs. the Space Mutants". I have to commend the filmmakers for helping to reduce the number of "giant snake" franchises, which hopefully will one day merge into one mega-franchise where every kind of snake known to man is simultaneously irradiated and they all grow to enormous sizes and fight in poorly lit access tunnels. Until that day, however, we'll just have to live with merely two overgrown snakes which are so stupidly big they stop being scary and become more passively interesting, sort like seeing the world's largest twine ball.

The movie opens at a wrestling match in Atlantic City, as designated by an obnoxiously flashing subtitle showing just how awesome the editor is with After Effects. Among lots of quick shots of a screaming crowd carefully filmed to hide the fact that there are only 17 people in the audience, the two wrestlers are brought out: first, a lucha libre mask-wearing guy called "The Python," and then his opponent, another man in a mask named "The Boa." This is known as "foreshadowing" because despite the fact that the movie is called "Boa vs. Python" and the cover art and DVD title screen shows a boa and python fighting each other, the director felt the audience might not know what they were getting themselves into.

While the two wrestlers perform basic maneuvers on each other, the scene focuses on two people sitting in ringside seats: Broddick and his girlfriend Eve. The two of them are a young rich power couple, as evidenced by the fact that they spend half the time making out and the other half sneering at all the lower class people around them. In between makeout sessions, Broddick places a call to "Ramon," who is riding along in a large 18-wheeler carrying some sort of precious cargo that keeps rattling and thumping violently. "I've obtained what you wanted," Ramon says. "It will be delivered to you shortly." Broddick replies with a compliment, meaning he only lightly insults Ramon's heritage and social class, before turning back to Eve. "What is it?" she asks. "It's a surprise," Broddick says. I guessed that it was possibly a giant python, or maybe a boa, but which one? My suspense was palpable.

As the 18-wheeler drives along, suddenly it starts thrashing violently as whatever mysterious cargo it is carrying wakes up. "Pull over," Ramon says, and disembarks to quiet down the unnamed captive beast that could be anything and not necessarily some sort of big snake. As Ramon and rest of his crew gather around the back of the truck, they bicker over which one is going to subdue the creature with a dinky tranquilizer gun one of them is holding. "Push the blue button," Ramon finally advises the unlucky winner, because the blue button will only open the hatch enough for a person to see and shoot through, and definitely not allow any sort of slender serpentine appendage to pass through. After the button is pushed, the unlucky stooge cautiously approaches the opening, having apparently never seen Jurassic Park and thus not knowing to avoid big cages holding mysterious giant reptiles. Sure enough, an enormous CGI snake tail emerges from the hole and whips around, thus killing everyone and somehow pressing the red button right next to the blue button which opens the door all the way. Ramon manages to make it to another SUV in the convoy and pull out a time bomb, which was needed if they ever needed to blow up a giant snake 30 seconds from now. This is apparently one of those times, and the timer counts down and blows up the truck and everything in the vicinity, surely killing the giant snake! Everything is fine, I guess. Movie over.

Bizarrely, the movie does not end, and instead moves to Broddick's private jet, which we know is his because the fuselage has a giant "BRODDICK" logo painted on the side. Broddick is so rich that the plane features full marble flooring and Grecian columns, which probably do little to augment the plane's load-bearing capacity. After making out with him for a while, Eve retreats to a private marble bathroom, where she begins taking a bath and scrubbing herself with a giant yellow sponge normally used to wash cars. Suddenly the camera switches to a snakes-eye view of something slithering into the bathroom! Is it a boa or possibly a python? There's a scream and Eve runs out into the bedroom holding a tiny snake, which is making weird gurgles and squeaks because the sound editors couldn't find any hisses in their stock sound effect library. Broddick calms her down: "I was just trying to condition you for the big snake. It's a real monster." God knows how many times I've had to say that to women.

The movie returns to the smoking wreckage of the snake convoy outside Philadelphia, where an asshole TV news reporter stands in front of a charred hulk of a SUV and starts ranting about terrorism. "Could this perhaps be a chilling attack by Al Qaeda operatives?" he intones, hoping that the phony verisimilitude will be mistaken for a modern and compelling movie setting. An FBI agent arrives on the scene and the reporter immediately begins badgering him. "Excuse me, do you think this could possibly be an AL QAEDA attack?" the asshole reporter asks. Agent "Sharpe," as he is called, ignores the reporter and walks over to the twisted remains of the 18-wheeler, where he immediately finds a large flat object about the size of a man's fist. "Big scale," another agent says. "Big case," replies Agent Sharpe, showing the sort of sparkling dialogue that will only become more egregious as the movie goes on. Nearby a big pipe has had its lid torn off, leading the agent to suspect that whatever was here has gone down the tubes, much like the director's career. A bumbling deputy finds an empty tranquilizer dart and wonders what it could have been for. "I'm not sure yet," says Sharpe, "but whatever it is, it just woke up." They don't call him Sharpe for nothing! 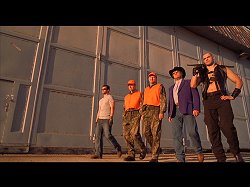 Worst. Hero Walk. Ever.The scene shifts to a poolside in Miami Beach, where dozens of strangely attractive people are lounging around, swimming, and splashing each other, which means it must not be college spring break since there aren't any pools of vomit and people having sex in the bushes. One of the loungers turns out to be "Monica Bond," who appears to basically be Hillary Duff only 50% older and with 100% less star power. Somehow she gets involved in a breath-holding competition with an ex-Navy SEAL, and as the two float underwater, Bond shows what a competitor she is by pulling up her bikini top, causing the SEAL to choke and nearly drown. While the SEAL's friend tries to pump the water out of his lungs and screams at Monica to get away from him, she smirks and collects hundreds of dollars in cash that people are offering to her for some reason. Just then Agent Sharpe shows up and interrupts Monica's gloating, introducing himself and telling her that she has to come with him to West Virginia. Apparently Monica's specialty is designing bizarre cybernetic implants for dolphins, probably because she just enjoys torturing them. "How well does your equipment work out of water?" he asks. She says she has no idea, because why the hell would anyone bother testing something as pointless and unrealistic as that? Nonetheless, she goes along for the ride.

Once in West Virginia, the two head to the "Longreen Snake Reserve," which looks like the visitor center from Jurassic Park. There they meet "Dr. Emmett," who besides sharing a name with Christopher Lloyd from "Back to the Future," is apparently one of the leading herpetologists in the world. Contrary to popular belief, "herpetologists" are people who study snakes, and not those who study herpes, who are called "snakeologists." Bizarre language, this English is. Emmett shows them inside and tells them they are going to go take a look at Betty the Boa, whom he introduces as the biggest boa in the world. After passing through a series of doors and interlocks straight out of a nuclear facility, they enter an oversized terrarium and the two non-herpesologists watch as Emmett picks up a snake about eight feet long. "That's not that big," Monica says, and Emmett says that the little snake is food for Betty, which Monica has actually been standing on without noticing. Sure enough, Monica is standing on a giant CG snake about the size of a house, and she freaks out and runs away. Agent Sharpe, on the other hand, is unperturbed. "This is big, and big is nice," he says sagely.

The movie cuts back to Broddick and Eve, who are putting together a big-game hunt for the giant python that's been let loose in the water system. They stand around in a vacant lot as the hunters pull up one by one, including:

After they all arrive, they line up and walk around in Jerry Bruckheimer-esque slow motion for a while, to cement just how badass a ragtag group this really is, and it might be capable of saving the earth from a giant asteroid or something if there wasn't a giant snake to hunt down first.